Turning Vegetarian: The Story of the Xiao Family

Turning Vegetarian: The Story of the Xiao Family

Inspired by their son's determination to protect all life and the environment, Xiao Bin and his wife turned vegetarian and have since experienced a positive transformation in their family. Furthermore, Xiao also started to prepare dishes to inspire his colleagues at the post office to go vegetarian as well. 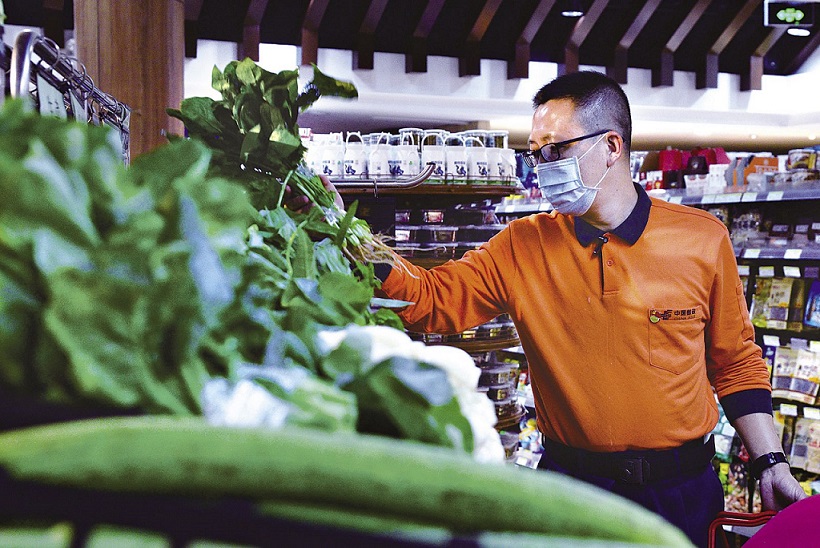 From carefully choosing the ingredients to cooking wholeheartedly, Xiao Bin makes dishes for his colleagues with the hope that they'll find vegetarian food delicious too.

Xiao Bin (肖濱) is a department manager at the post office of Kulangsu, an island near the city of Xiamen in China. During the COVID-19 lockdown, almost every shop and restaurant on the island, except the post office, was closed. After seeing that his colleagues had no choice but to eat instant noodles for days, Xiao decided to start cooking vegetarian meals for them.

Whenever Xiao Bin was at work, he would prepare three meals a day for his colleagues. In order to introduce vegetarianism to them, he would search for recipes online, plan ahead, and then cook the meals wholeheartedly. His mapo tofu and potato curry are the favorite dishes among his colleagues.

Kulangsu Island is a pedestrian-only island, so postmen have to deliver the newspapers or mails to everyone's doorstep on foot, walking seven or eight kilometers a day. When asked if a vegetarian diet was enough to support their workload, postman Deng Cunhui (鄧村輝) replied, "Our manager has been promoting vegetarianism for a while now, and after two months of vegetarian meals, I don't feel less energetic. At home, I would only eat one bowl of rice. But here at the office, I can finish two large bowls of rice with the delicious vegetarian dishes. My colleagues and I also used to eat separately on our own, but now we eat together like a family. It feels nice." Having said this, Deng's wife just so happened to call, so he shared with her the vegetarian dishes he had today. 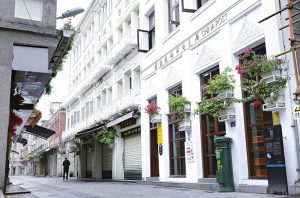 With most shops and restaurants in Kulangsu closed due to the COVID-19 pandemic, postmen could only keep hunger at bay with instant noodles and milk.

Another postman, Xu Songhua (徐松華), also agreed with Deng. "I feel as if I have a cleaner body and mind after I changed to a vegetarian diet. I used to think meatless dishes would be too bland, but now I know that vegetarian dishes can be delicious too, so there's really no need to eat meat." Sometimes, when Xiao Bin is not at the office, Xu and the other colleagues would also cook vegetarian dishes.

A Five-Year-Old's Choice
The reason Xiao Bin became a vegetarian was because of his son, Xiao Shunyu (肖順宇). When Shunyu was born, he was rather weak, so his parents fed him with expensive and luxurious foods such as lobsters, deep sea fishes, imported meats, etc. However, Shunyu started having stomach problems and fell sick easily. After learning about the importance of a balanced diet, his parents followed the doctor's advice and gave him less meat, so Shunyu slowly became healthier.

A kind-hearted soul, Shunyu always resisted eating meat as he could not bear seeing animals being slaughtered in the market. As a result, meat dishes gradually disappeared on the family's dining table, though his parents still gave in to their occasional cravings.

In October 2017, Shunyu and his mother took part in a challenge to be a vegetarian for 108 days hosted by the Jing Si Books and Café in Xiamen City. Every Saturday, Xiao Bin would accompany his son to the various courses given during the challenge, such as lessons on recycling, filial piety, and etiquette. During one of the lessons, Xiao Bin was deeply moved when his son, under the guidance of volunteers, served him tea as an act of filial piety. Xiao Bin was reminded to be filial and respectful to his parents as well.

The father-and-son duo started volunteering at the Jing Si Books and Café, and they even participated in a presentation of drums and bells at a Tzu Chi's Year-end Blessings Ceremony. Since then, Shunyu was determined to love all life and protect the environment, and he convinced both of his parents to become vegetarians as well.

A Positive Transformation in the Family
Whenever any relatives or friends expressed their concerns for Shunyu's health because he went vegetarian at such a young age, Shunyu would show them his muscles and assured them that he was healthy. He also loved table tennis, rollerblading, lifting small dumbbells and a variety of sports. 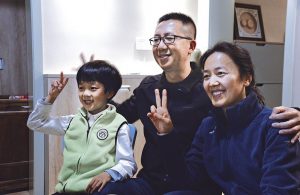 By going vegetarian, Shunyu's health was not only improved, but there is also more happiness and harmony in his family.

At first, Shunyu's grandfather—out of his worry for the boy's health—would nag at the family of vegetarians and always put meat in his grandson's bowl. However, after seeing that Shunyu turned healthier and was growing well, he relented. Now, whenever the family of three visits the grandparents, Shunyu's grandmother would cook vegetarian dishes for them.

Shunyu's mother, Yan Shuling (閆書玲), also commented that after her son became a vegetarian, he fell sick less often than his peers, and even if he did catch a cold, he would recover in two days without any medicine. He also learned to not waste food and to always finish his plate. Since going vegetarian, Shunyu's parents and grandparents no longer had to worry about his health anymore.

Going vegetarian also helped create a positive transformation in the family. In the past, Xiao Bin and Shuling would often argue and fight over their differences. However, after Xiao Bin learned about Tzu Chi's spirit and values during Shunyu's vegetarian challenge and started participating in other Tzu Chi activities such as paying home visits to the needy and taking part in study groups, things started to change.

Shuling was most delighted about her husband's transformation. "Ever since he joined Tzu Chi and became a vegetarian, he's like a changed man. He's always cheerful and expresses his gratitude all the time. He also maintains a healthy daily routine such as waking up early to read books. I'm grateful to Shunyu for introducing Tzu Chi to his father and encouraging us to become vegetarians. Now, our family is full of positive energy, and I love it," she said with her face beaming with a smile. 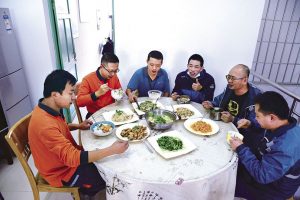 After Xiao Bin started cooking vegetarian meals for his colleagues, his colleagues have experienced better health and enjoy eating together like a family.

For Xiao Bin, going vegetarian not only made his body healthier, but also helped calm his mind so he could better think things through. Having experienced more warmth and harmony in the family, Xiao Bin and Shuling wish that more families can turn vegetarian to enjoy the happiness they are blessed with now.

In the workplace, Xiao Bin has been sharing with his colleagues the benefits of vegetarianism for a good body and mind. He also started preparing vegetarian dishes for them. "There's better rapport among our colleagues now and it's easier to communicate work matters," said Xiao Bin.

Shunyu's determination to become a vegetarian not only transformed his family, but also influenced his father's colleagues. His love for the Earth and all life is like a ripple, spreading kindness to those around him and beyond.