Love in the Desert

Love in the Desert

How does one find the Syrian refugees and the nomadic Bedouins residing in the vast Jordanian deserts? Nowadays, people rely on GPS to find a specific location, but Tzu Chi volunteers in Jordan are all equipped with the "GPS of love", which enables them to locate the tent areas of refugees and nomadic groups without difficulty. 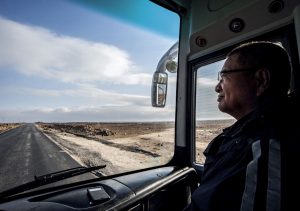 In the midst of the vast desert, Tzu Chi volunteer based in Jordan, Chen Chou-hwa (陳秋華), can easily point out the tent communities of Syrian refugees and nomadic groups.

On April 23, 2019, Taiwan's former Minister of Culture, Ms. Lung Ying-tai (龍應台), posted on her personal Facebook page a recap of her experience in witnessing the suffering of Syrian refugees and the children's desire for an education in Jordan. In her post, she mentions how as the civil war wages on year after year, babies are born onto the muddy soil, infants grow up in shabby tents, teens start to be aware of the situation they are stuck in, and also how the elderly die tearfully in foreign lands.

Accompanied by Tzu Chi volunteer Lai Hua-xiu (賴花秀) of Tzu Chi's office in Jordan, Ms. Lung visited Mafraq Quran and Hadith Science Center and also a tent area in Huweyja. There, she saw people's suffering and the love of Tzu Chi volunteers. Ms. Lung wrote about how volunteers from Taiwan's Tzu Chi foundation handed out breakfast to children, how they subsidized the teachers' meager salaries so that children could receive an education, and how they strove to provide water and electricity for the tent residents in a place so desolate it seemed to be at the world's end.

Setting Foot in Foreign Lands
Before the publication of this article, Tzu Chi volunteers from Taiwan who were to take part in the aid distribution for Ramadan had already made preparations to fly to Jordan. From May 1 to May 14, Tzu Chi volunteers paid home visits to the Bedouins living in poverty and strove to help overcome the difficulties Syrian refugees faced due to the lack of medicinal and educational support.

Jordan's highways mainly run from the north to the south, with the remaining areas being mostly bare, desert land. Although smaller roads are available, they are unmarked roads and cannot be distinguished on satellite pictures. As people rarely use hard copy maps nowadays, they largely rely on Google Map and global positioning systems on their mobile phones when trying to find their way around.

However, equipped with the "GPS of love," Tzu Chi volunteer in Jordan, Chen Chou-hwa, has always been able to find the tent areas of the nomadic people despite the vastness of the deserts. Without an address and only locatable via longitude and latitude, the tent area in Huweyja is very close to Zaatari Refugee Camp, which houses 80 thousand refugees and is only 5 km from Syrian borders.

On the dawn of May 12, Tzu Chi volunteers set out from Jordan's capital, Amman, and drove for three and a half hours until they reached Huweyja tent area. To the north of it is the Syrian border. 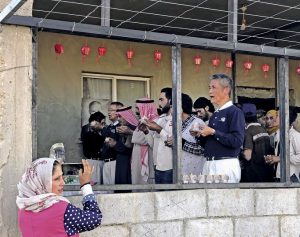 Marian's family lends their home to Tzu Chi volunteers so they could have a place to hold a Buddha Day Ceremony and an aid distribution.

Refugees who flee from Syria have two choices, one is to live in a refugee camp and receive support on clothing, food, water, electricity, education and health care from the UN and various NGOs, but be under surveillance at all times, or to give up all aid support and pay rent to the government like one family does in Huweyja tent area in order to enjoy freedom, as freedom is most precious in life.

The head of this family, Marian, is a 70-year-old widow. Her family fled from Syria in 2012, and were stuck in a refugee camp until they decided to rent their own place and start life anew.

When they first arrived in Jordan, there were 20 households in her family. Now, there are 27. Their residences gradually evolved from tents to brick houses although their windows lacked windowpanes. The grapes they'd planted at the front and the sheep they kept at the back were proof that although life was difficult, they were rebuilding their homes step by step.

Tzu Chi volunteers decorated the ceremonial table with roses picked from Chen Chou-hwa's garden and lotus lamps made from plastic bottles. The venue was solemn and dignified. Everyone prayed sincerely before the ceremonial altar in an orderly manner.

Giving with Respect
After 22 years of charity work in Jordan, Tzu Chi Jordan chapter finally achieved formal government recognition as an international NGO on January 23, 2019. Around the world, it is Tzu Chi's custom that on every second Sunday of May, Buddha Day, Mother's Day and Tzu Chi Day are celebrated together. So, on May 12, 2019, thanks to the kindhearted provision of a venue by Marian's family, Tzu Chi's chapter in Jordan were able to hold a Buddha Day celebration in this Muslim community.

Ending a Fast After Sunset
After sunset, Tzu Chi volunteers started to distribute aid to the 27 households consisting of around a hundred and forty people in total. Thanks to the five solar lamps brought by Tzu Chi volunteers and the assistance of headlights, the darkness was not a problem.

After Tzu Chi's first evening aid distribution in Jordan ended successfully, one of Marian's sons played music and people started to dance, adults and children alike. Tzu Chi volunteers learned the dance moves to the lively tempo in no time. Under the vast desert sky unpolluted by light, it seemed that all thoughts of homesickness and the troubles of making a living had been temporarily forgotten.

During an interval, two children put on a skit in Arabic. A local volunteer who understood Arabic interpreted their dialogue for Tzu Chi volunteers, telling them that the skit was about not cheating customers by secretly adding water to milk, which was a reminder that people should be honest.

Who was it that taught the young children such ethics and principles of life? 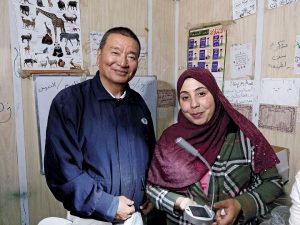 It was Khadja, the youngest daughter of Marian, who was born in 1989. She started accompanying the children to school in 2017, and helps them with their studies after school in a prefabricated house that lacked tables and chairs.

With no books or educational tools available, Khadja, who only received a high school level of education herself, teaches children to recite the Quran, simple Arabic and also basic Math skills from her memory.

Originally, UNICEF provided Khadja with a monthly subsidy of 175 Jordanian dinars (US$ 247.5), but the subsidy was cancelled in June 2018. To make a living, she picked tomatoes with her brothers in a farm and could not focus on giving the children a better education. Starting from December 2018, Tzu Chi's Jordan chapter started subsidizing her for her education work. With the money she received, instead of thinking about fulfilling her own needs, she thought about buying tables and chairs for the children. Touched by her kindness, Tzu Chi's Jordan chapter fulfilled this wish for her, too.

Each morning, Khadja walks to school with the children, and then walks back home at a quarter to twelve. Chen Chou-hwa spoke highly of Khadja, as even though she had only received a high school level of education, she put in more effort than a professional teacher. Her efforts have earned the recognition of the Jordanian government, and she has been certified as a formal teacher.

In March 2019, Tzu Chi volunteers set foot once again in the tent communities of Huweyja to learn about the children's learning conditions, bringing with them 150 sets of school supplies, along with LED light ball point pens which were gifts from Tzu Chi's headquarters in Taiwan. As lamps weren't available there, such pens were especially precious. One child received more than one pen, and returned the extra one to the volunteers. Someone asked him, "Who taught you about being honest?" The child replied, "Ms. Khadja did." The volunteers found it hard to forget how the children knew not to be greedy despite their poor living conditions.

Education Brings Hope
"Back in Syria, our family owned four farms and we had an extensive family of 700 households. But now, our homes have been destroyed and family members have gotten separated," Khadja told Tzu Chi volunteers. "However, tonight has been the best night we've had since we arrived in Jordan seven years ago," Khadja added. 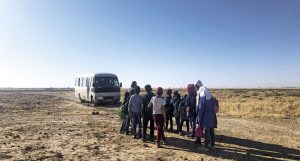 The children of Huweyja wait for an hour for the school bus to arrive. Education is like a ray of light that lights up the path of hope for refugee children.

It was heartrending how this family of refugees strives for survival amidst adversities. Tzu Chi volunteer Huang Fu-quan (黃福全) says, "Of all my experience in international relief, this is the first time I've taken part in an aid distribution at night. Although it was not a large-scale aid distribution, it was very heartwarming. Through our interaction, I can feel the love they have for Tzu Chi volunteers."

As it was late and the children had school in the morning, the gathering ended at 10 o'clock. Tzu Chi volunteers asked Khadja to go to the classroom to give her a gift from afar. It was a gift from Dharma Master De Shan (德善法師) of the Jing Si Abode in Hualien, Taiwan, as she was touched by Khadja's love and asked Mr. Chen Chou-hwa to gift her with a solar-powered lamp on her behalf.

Once, a Syrian refugee parent said, "The next generation of Syrians has been ruined, because most of them cannot go to school. No one knows how long they'll be without schooling, but without it, they will be ruined."

There are also refugee children who are bullied either because of their race, their poor hygienic conditions, the trauma they suffered due to the war, or many other reasons. Therefore, even though they have the right to receive education, they choose to give it up.

To the children of Syrian refugees, education is as indispensable as sunshine, air or water. It is what brings them hope to welcome a brighter future. The children of the Huweyja tent area are lucky to have Ms. Khadja educate them with a heart of love, so they will not be among the ruined next generation of young Syrian refugees.