When My Parents Argue…

When My Parents Argue… 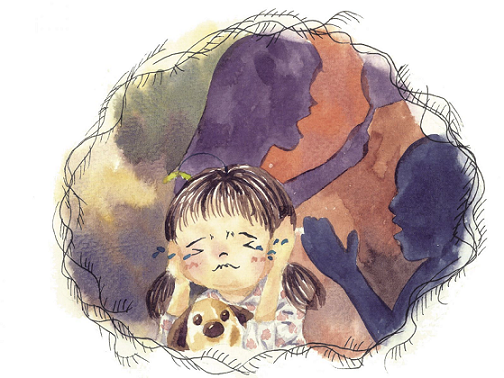 Q: Whose side should I take when my parents argue?

A: When parents argue, sometimes, their children might wonder about whose side they should take. They might even suspect that they were the ones who caused the argument by not being good enough.

When I was a child, my parents would bicker every couple of days, and have serious altercations almost every week. My mom would always lose the fights, and bitter about being hit, she would pack her belongings the next day and set out to stay at her sister's place for a few days. Fearing that she might never come back, my siblings and I would stop her by clinging onto her legs, waist and luggage, crying for her not to leave us. Although these were incidents that took place in my youth, they remain vivid in my mind to this day. This shows the extent of damages that can be caused when children witness their parents fighting.

Shortly after my husband and I got married, we came to an understanding that when arguments were inevitable, they had to be constructive and beneficial instead of being deleterious to our marriage. This is because having finally established our own family, neither of us wish to destroy it. So, we've chosen to "fight the smart way."

Secondly, remove yourself from the scene. When an impending argument can be foreseen, try leaving the scene. You can go to a park and take a half-hour walk to let your emotions subside. After that, your words will surely be less harsh, because by leaving the scene and gathering your thoughts in solitude, you won't get carried away due to your anger.

Thirdly, speak less and write more. I've taken up the habit of writing down my dissatisfaction, and I've found that this process gives me the chance to reflect upon myself and sort out my emotions. This not only mollifies my words but also removes the chiding tone as well, helping me stay focused on of the point of discussion. This way, the person who reads my words will be more accepting and understanding to the true reason behind my discontent.

Finally, apologize to your children. Many psychology experts have suggested that after parents fight, they should apologize to their children. You can do this by saying, for instance, "We're sorry to have frightened you by being so loud," so that your children will understand that you have noticed how your actions have brought them discomfort. It is advised that when parents argue, apart from being careful about your choice of wording, try to avoid having heated conflicts in front of your children altogether. Most importantly, after your anger subsides, pay attention to your children's emotions as well, and by putting yourself in their shoes and understanding their fear and distress, explain to them what had just taken place.

The relationship between parents influences their children immensely. Parents who share a good relationship and households that are harmonious not only set good examples for children but also guides them on how they should interact with others. If possible, parents should communicate but not argue, at least not in front of their children, to avoid traumatizing them for life or even leaving them with issues concerning making social connections.

As for children, you might not be able to choose whose side you should take, but you can express your helplessness and fear caused by your parents' arguments. By doing this, you can remind your parents that they should understand how you feel and let them realize that the home does not solely belong to them as you are also a part of it, and that they should respect your feelings as well.