In March, Cyclone Idai devastated the mountainous district of Chimanimani in eastern Zimbabwe. As the disaster altered the area's landscape and people’s lives, Tzu Chi volunteers do what they can to tide the locals over.

In March of 2019, Cyclone Idai hit southeastern Africa, bringing torrential rains that caused flash floods and triggered destructive landslides. In the landlocked country of Zimbabwe, the cyclone claimed at least 344 lives and affected 270,000 people. Chimanimani District, a mountainous area in Manicaland Province located in eastern Zimbabwe, was one of the worst-hit areas with near total destruction. 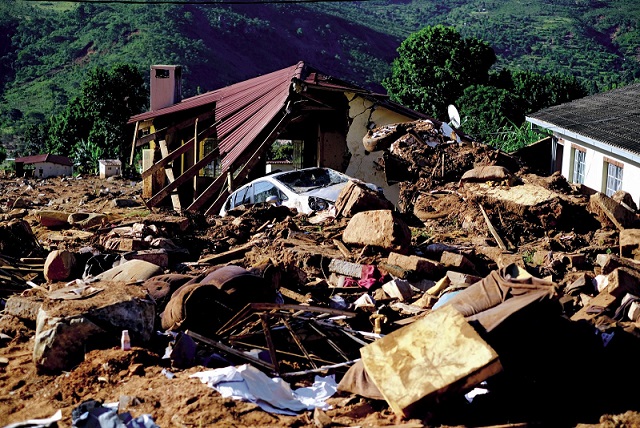 Mudslides destroyed houses and swept away buildings in Chimanimani District.

Entire settlements were swept away. Main roads and bridges were destroyed. Local survivors said that when the disaster hit, flash floods came from all directions, uprooting trees and taking away everything, leaving nothing but mud afterwards. With no water or electricity, the local survivors had to use standing water by the roads. They also had to endure cold nights in the mountains as temperatures would drop from 20 degrees Celsius during the day to less than 10 degrees at nighttime.

The week after the cyclone struck, Tzu Chi volunteer Tino Chu (朱金財) and local volunteers in Harare loaded a car with bread and water purification solution, and headed to Manicaland Province to survey the disaster. The drive to Chimanimani would normally take five hours, but as the cyclone significantly altered the landscape, they had to take a detour through rugged mountain roads and travelled for more than ten hours. The road conditions were so bad that the volunteers had to stop halfway and stay overnight outside a military base without any water or electricity before finally arriving to Chimanimani the next day.

After returning to Harare to purchase relief supplies, Tzu Chi volunteers had to also face the long-term problem of fuel shortages in Zimbabwe caused by a poor economy, foreign currency shortages, and other factors. People had to queue for at least four hours at gas stations to buy fuel. 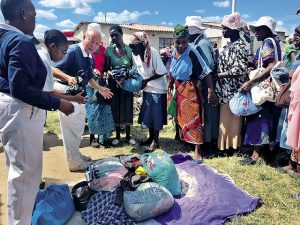 Learning of the severe impact that Cyclone Idai has brought to their country, poor people bring clothes and spare change for Tzu Chi volunteers to bring to those affected.

With three cars waiting to deliver aid supplies to the affected areas, Tzu Chi volunteers had to search for fuel every day by queuing at gas stations. "Lately, the longest that I've waited in line was six to seven hours. It's alright as long as we can buy fuel. There were several times when after waiting for hours, the station staff told me that there's no fuel to sell anymore! And without fuel, we cannot go to the affected areas…," Chu said, holding his tears back. "After visiting the disaster areas and witnessing the conditions with our own eyes, we really see that the affected people desperately need help."

In Eastview, a community where Tzu Chi has been caring for many years, the locals mobilized to help their country fellowmen. Before Tzu Chi volunteers arrived to their gathering site, many people were already there. More than 800 community members came, bringing clothes and spare change for Tzu Chi volunteers to bring to the affected people.

Living alone with no job, a 78-year-old woman took out nearly all of her savings—about 25 US cents—to donate for disaster relief. "Hearing the deaths and injuries caused by Cyclone Idai, I was so sad that I cried," she said. Poor people living in the Jacha area on the outskirts of Harare also brought their most valuable possessions to donate to those in need. "Clothes and shoes are what the survivors need, and these are things that we can give," said one of them.

Supporting One Another After the Disaster 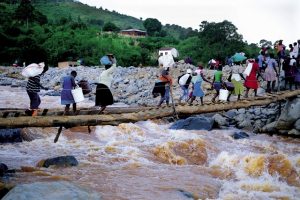 With no homes to return to, local people cross a river to go back to the shelters after collecting aid supplies from the government and NGOs.

In Chimanimani District, rocks and mud left by the flash floods covered the land, red soil was exposed on the slopes of battered hills, and severely damaged roads had isolated the region. Three weeks after the disaster, the local government was still trying to fix the roads and recover them to basic conditions, and the living circumstances of the survivors remained critical.

International rescue teams and rescue dogs continued to look for bodies of the deceased. In Kopa village at the foot of the mountains, an administration center and hundreds of buildings were wiped out by the mudslides, leaving hundreds of people dead or missing. To get supplies handed out by the government, the locals had to cross a makeshift bridge on a fast-flowing river that appeared after the cyclone.

On April 5 and 13, Tzu Chi volunteers held two large-scale distribution events in the disaster-hit areas, giving bean flour to seven shelters and handing out 2,000 blankets so the survivors can stay warm at night. More than 400 affected households also received oil, salt, sugar, corn flour, and clothes. The locals were so relieved and happy that they started to sing and clap their hands.

An aid recipient told Tzu Chi volunteers: "People from other organizations came, put down the supplies, and left. You, on the other hand, have personally handed the supplies to us and even prayed for us. I am very touched by what you have done for us. It's the first time I felt warmth after the disaster." Leading the volunteers to the place where her house once stood, the woman pointed to an area with nothing but yellow mud. "There were three rooms in my house. The yard was here, where we raised chickens. And my kitchen was there…," said the woman.

Recalling the night when the disaster struck, the woman said that the mudslide broke through her door. Her husband and her two daughters were injured, but she and her family luckily escaped and are now staying in an overcrowded shelter at a church. Having lost all of what she owned to the cyclone, she often wanders about spiritless, walking to the river to wash clothes or waiting for supplies to arrive. Her situation represents the living conditions of all the other survivors staying in shelters.

With the care and warmth brought by Tzu Chi volunteers, smiles have finally returned to the faces of the woman and her family. Putting on the clothes brought by the volunteers, her youngest daughter seemed to have found some hope to face the unknown future.

Tzu Chi volunteers pick up an old photograph from the debris of destroyed houses.

Among the group of local Tzu Chi volunteers working to help the Idai survivors, Jeam lost four family members in her hometown in Chimanimani District. "My family thought that the rains have stopped, but in fact, the flood was so high that it reached one's chest…," said Jeam. Back in her hometown, she could no longer hold back her grief. The bodies of her parents and siblings were not yet found.

Jeam saw a woman standing alone before the mud and rocks, approached her, and told her that her family was also swept away by the floods. "Let us not dwell in sadness and leave everything in God's hands," said Jeam, bursting into tears. The woman embraced her and told her: "Don't cry. We must believe in God and have faith that everything will be alright." Having lost six family members herself, the woman let Jeam weep on her shoulder, and both comforted each other as they mourned together.

Determined to transform her loss and grief into love and compassion, Jeam said that she will continue to volunteer with Tzu Chi and help more people in need, supporting Idai survivors on their road to recovery and healing.