Thank You for Being There

Thank You for Being There

In June 2012, after days of torrential rain hit Taiwan, Tzu Chi volunteers were the first to bring hot meals to those affected by the flooding in Budai, Jiayi. In 2018, when serious flooding struck again, the locals had faith that Tzu Chi volunteers would soon go to their aid again… 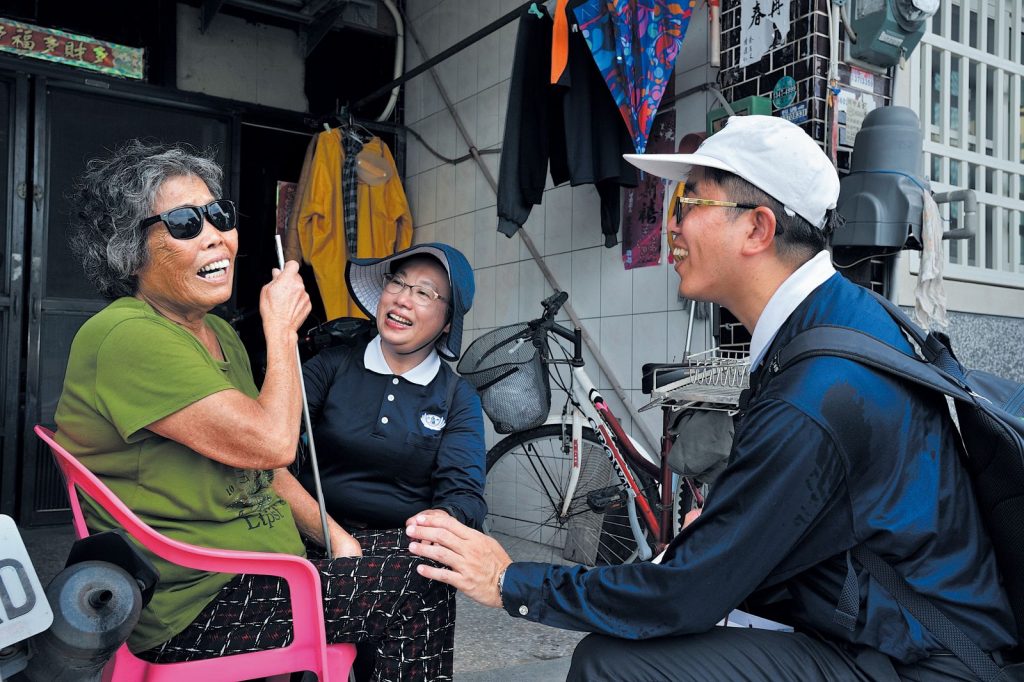 Tzu Chi volunteers visit an elderly lady in Budai Township after the flooding.

“I started to worry when it began to rain heavily on August 23, as the water kept flooding into our village,” said Li Fu-du (李福度), chief of Zhongan Borough, a village of Budai Township in southern Taiwan. Unfortunately, Li’s fears came true, for the pouring rain not only battered most of southern Taiwan but also caused flooding to the low-lying areas of Li’s village.

On the other end of Li’s phone, villagers kept asking, “Chief Li, my house is flooded! What should I do?” Li grew deeply anxious for his fellow villagers’ safety, and contacted the township office for help only to learn that several nearby towns were also inundated.

Residents were busy moving furniture to dry places in their houses. Many of them couldn’t cook because their kitchens were flooded. Even if they wished to go out to buy food, they couldn't go anywhere as the roads were also flooded.

“Tzu Chi volunteers will bring boxed meals to our village,” Li was sure about this. Back in June 2012, when the meiyu front and the southwest air current brought heavy rainfall to Taiwan, his village was seriously inundated. That was when Tzu Chi volunteers brought hot meals to the village for the first time. During that period of time, Li often saw how Tzu Chi volunteers provided aid and relief to those affected in the disaster areas on Da Ai TV.

Sure enough, early in the morning of August 24, Tzu Chi volunteers arrived just as Li had anticipated, and made their way through the floodwater while pushing along a rubber raft loaded with boxed meals. “I was so touched!” Seeing the Tzu Chi volunteers providing aid, Li’s heart filled with gratitude. 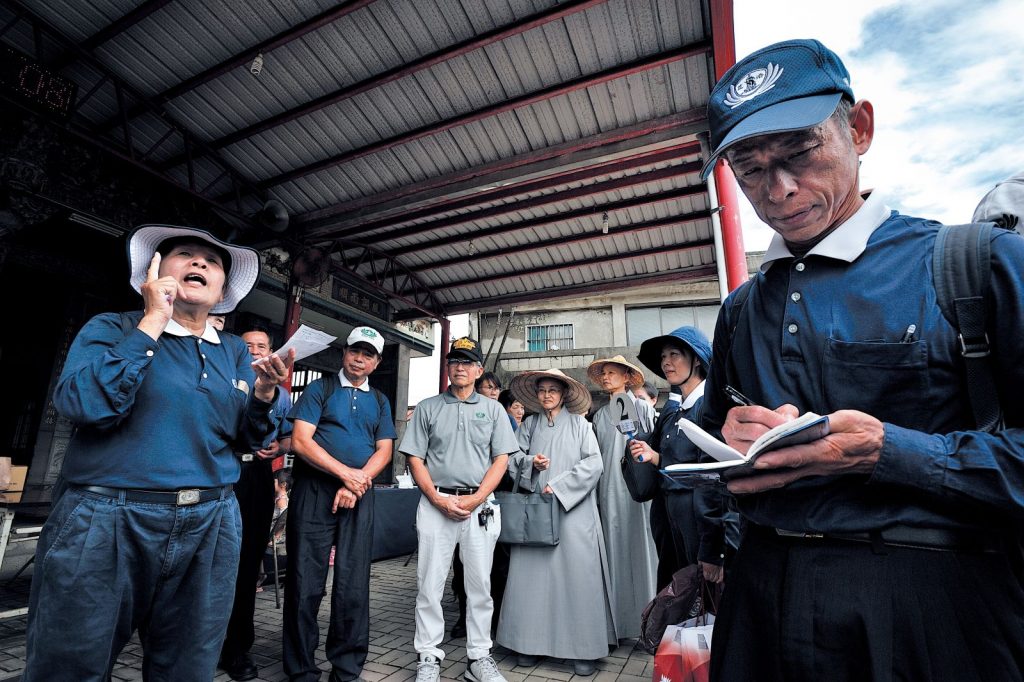 One week later, over 200 Tzu Chi volunteers from central and southern Taiwan split into 29 groups and set out to visit those affected in Budai and its nearby towns. They visited residents from door to door to survey the damage made in each household to determine whether assistance was needed. Among them, six groups of volunteers arrived at Zhongan Borough.

Most residents of Zhongan Borough make a living by aquaculture or farming. After the floodwater receded, fish farms and footpaths between farmlands became readily distinguishable again. Along the ditches between farmlands, many locals were trying to catch the fish that had escaped from fish ponds during the flooding with fishing nets. To ensure that home visits go smoothly, Li Fu-du and his five neighbors served as guides for Tzu Chi volunteers. “Please follow the routes we took last time for distributing boxed meals, so no household will be left out,” Li reminded his fellow guides one by one.

There are roughly 460 households in Zhongan Borough. Most of the youth in the households have left the village to earn a living elsewhere, leaving elderly family members behind. Zheng Li A-chen (鄭李阿趁), a lady in her early 80s, stood in the doorway of her house with her son. When Tzu Chi volunteers went to her house, she tightly held the hands of a Tzu Chi volunteer and said: “I was so scared! The water kept flooding in and I didn’t know what to do!” Tears began to fall from her eyes. The volunteer immediately embraced her and comforted her, while the others went over to pat her on the shoulder or hold her hands tightly. Her son Zheng Kai-jun (鄭凱駿) stood by her and said, “Thank you so much for coming!”

Zheng Kai-jun, the third son of his family, works in northern Taiwan. Having learned about the flooding in his hometown on TV a week ago, he anxiously drove back home right away. However, the homebound roads were impassable due to flooding. After wandering through several villages and repeatedly asking for directions along the way, he finally arrived home.

Zheng’s parents cried with joy when they saw their son return home safely. With their son being around, they felt a huge sense of relief. After days of cleanup efforts, their house had almost returned to its original state. Before their departure, Tzu Chi volunteers comforted Zheng Li A-chen once again: “It’s a blessing that your whole family is safe. Please let go of your worries and cheer up, so your son can return to northern Taiwan without concerns.” Zheng Li responded with a smile, which made the volunteers feel assured before they left. 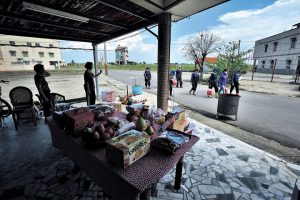 When visiting local households in Budai Township, Tzu Chi volunteers are met with a warm welcome from the locals.

Li Jiang Bao-yu (李江寶玉), who suffered a stroke two years ago and has to support herself with a cane, held the hands of a Tzu Chi volunteer in the doorway. She said, “I didn’t dare to come downstairs, so I stayed upstairs for two days!” Fearing that she might slip on the water accumulated in the house, her family members asked her not to go downstairs, and her daughter-in-law brought meals upstairs for her. “I'm grateful to our borough chief for bringing us boxed meals prepared by Tzu Chi, and also some rice dumplings too,” she added.

Her husband, Li Qing-hui (李慶輝), had been busy with cleaning up the house for several days. His feet had become red and swollen after being soaked in the dirty water for a long time. It was only after the water at home receded the previous day that his feet, which were treated with ointment, began to heal.

Grandma Chen, another villager affected by the flood, is in her eighties and lives alone. She looked thin and frail when standing in the doorway of her two-story house. Her eldest son had passed away, and her youngest son works in northern Taiwan, making an income that could barely make ends meet for himself. Without any financial support from her son, she can only get by on Old-Age Farmers’ Welfare Allowance, an allowance from the government.

Being illiterate, Grandma Chen couldn’t understand the borough chief’s explanation of how to apply for cash grants from the government's disaster assistance program. Tang Yu-huan (湯鈺環), a Tzu Chi volunteer who is in charge of the regular home visit operation in the community, immediately wrote down “subsequent visits required” in the home visit record. She hoped that with the help of Tzu Chi volunteers, this elderly lady who lives alone in her hometown can rebuild her life sooner in the aftermath of the flooding.