The COVID-19 pandemic has severely damaged economies the world over, including that of Malaysia. In response, Tzu Chi initiated a relief program that offered money to needy families for three months. Volunteers wanted the timely help to ignite a spark of hope and help the disadvantaged cope with the challenges facing them. 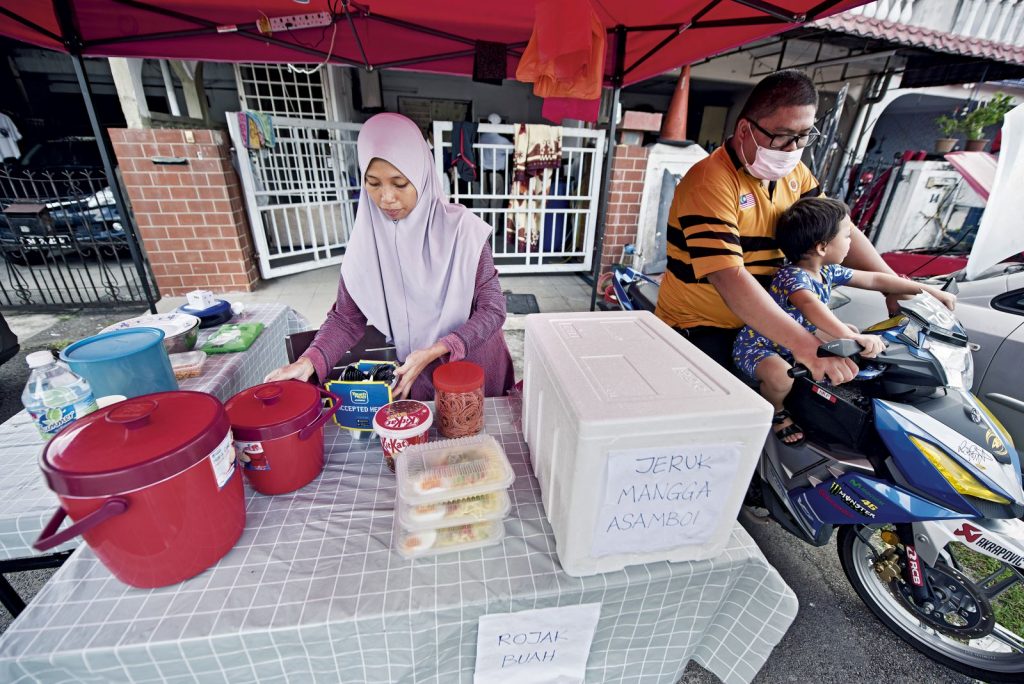 Mohd Irzwan Zulfitri bin Hamzah, on the motorcycle, lost his job twice because of the pandemic. He and his wife (left) decided to use some of the relief cash from Tzu Chi to start a business in front of their home. (Photo by Kevin Tan Kok Sieong)

Mohd Irzwan Zulfitri bin Hamzah, 28, lives in Ampang, Selangor, Malaysia. He was laid off by his employer after the Malaysian government implemented the Movement Control Order (MCO) in March 2020 to slow the spread of the coronavirus. Without a full-time job, Irzwan became a delivery man. He believed that so long as he worked hard, he would be able to put food on the table for his family. Unfortunately, he lost his job again after the government implemented the Recovery Movement Control Order in June and the demand for delivery personnel dropped as a result of more businesses returning to more or less normal.

With two children and a third on the way, Irzwan desperately needed help. "My son brought home a flyer from school about a Tzu Chi COVID-19 relief program. I read it and immediately decided to apply," said Irzwan. His application was approved, entitling him to three monthly installments of financial aid. He received the first payment in September 2020, with which he bought powdered milk and diapers for his children and daily necessities for his family. He used the second payment, in October, to start a business in front of his home selling ready-to-eat Malay food. He said in a phone conversation with a Tzu Chi volunteer that his business was doing well, which would at least help keep his family afloat while he continued to look for a job.

Irzwan's situation is representative of those of many others in Malaysia and around the world. The pandemic triggered a recession unprecedented in its severity. It seems that no country has been left untouched by either the disease or its economic ramifications.

Wong Chin Yoong (黃錦榮) is an associate professor in the Department of Economics, Faculty of Business and Finance, at Universiti Tunku Abdul Rahman in Malaysia. He pointed out that it would be difficult for the major industries most directly impacted by the pandemic—aviation, retailing, lodging, and tourism—to return to their past glory. He said this impact would extend also to small neighborhood stores. This is because people's routines have been reshaped by the pandemic; many people have acclimated to cooking at home or having their meals delivered to them. It's hard for people to go out shopping now or to spend money. Even when the economy is allowed to reopen, things will not be the same. Many companies have downsized, cut staff, or cut pay, taking down with them the livelihoods of many people.

Under such dark clouds of uncertainty, Tzu Chi volunteers visited residents of government low-cost flats to extend their care. They learned during such visits that many people were struggling with unstable incomes. To relieve their economic difficulties, the Tzu Chi Kuala Lumpur and Selangor branch decided to launch an aid program to help. The program was called "Kita1Keluarga," meaning "we are one family." 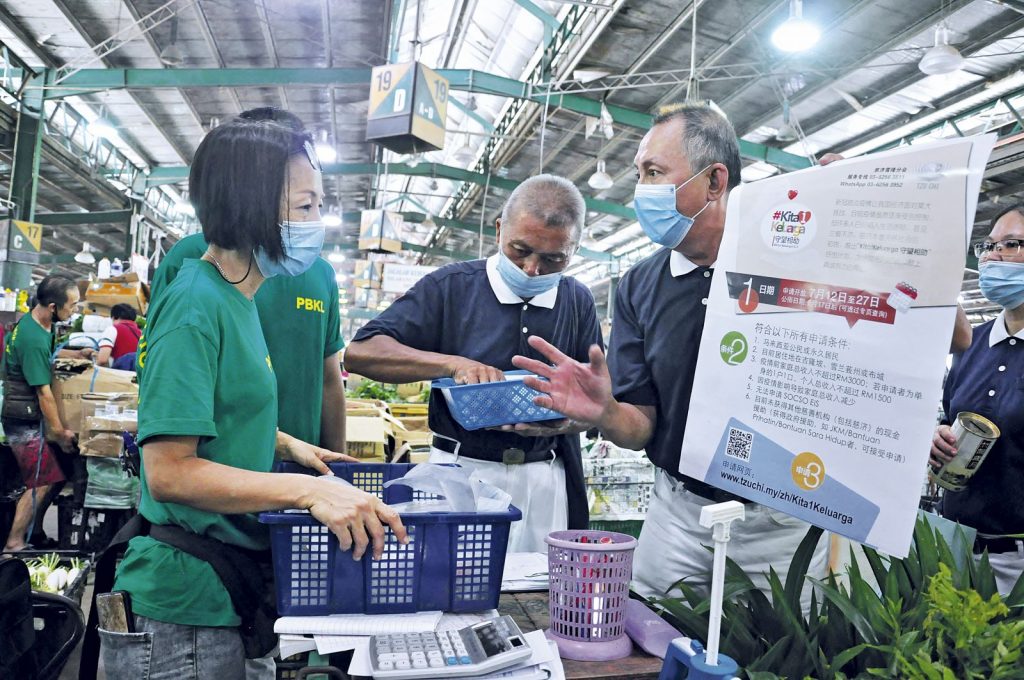 Malaysia is a multi-ethnic nation. The diverse cultures and languages of its people are a source of advantage and pride for the nation. After the pandemic broke out, the Malaysian government urged its citizens to live out the spirit of "Kita Jaga Kita" (We take care of us). In other words, the government hoped that people of all ethnicities could help one another in their joint fight against COVID-19. In line with this spirit, Tzu Chi Kuala Lumpur and Selangor launched the "Kita1Keluarga" program.

Lim Mei Mei (林美美), one of the persons in charge of this program, said, "In this worldwide crisis, we can't look to others for help. We should help ourselves instead. Those who are more fortunate should help those who are worse off. We hope that our project can set in motion a cycle of goodwill in society."

Go to Where the Needy Are
The government had, via various relief packages, tried its best to help businesses and people, but it couldn't meet everyone's needs. Every family had different problems, and the time they needed help and the kind of aid they required might be different. Therefore, it was necessary for private charitable organizations to supplement the government's aid.

After Tzu Chi decided to launch the program, volunteers bought newspaper ads to announce it. They followed that with 172 informational sessions in communities to further spread the news. Their goal was to help every family that needed assistance but had no other way of obtaining any.

Volunteers in Klang even set up service counters at several locations to help prospective aid recipients with their applications for Tzu Chi's assistance. These included service counters at Pelangi Court apartments, a health clinic in Bukit Kuda, and the Tzu Chi tutoring center at PPR Padang Jawa (PPR is public low-cost housing). Volunteer Chong Sui San (鍾瑞珊), of Klang, said: "When the needy can't come to us, we must go to them. How else can we understand the difficulties they face, day in and day out? It's a blessing to be able to take help and warmth to people whose lives have been plunged into distress or who don't even have enough to eat."

The application period for the program ran from July 12 to 28, 2020. Volunteers visited each applicant's home to evaluate and determine whether they were eligible for the help. The volunteers raced against the clock to get the money into the hands of the underserved. During the first two weeks of August, volunteers logged 10,769 shifts and completed more than 4,000 home visits. 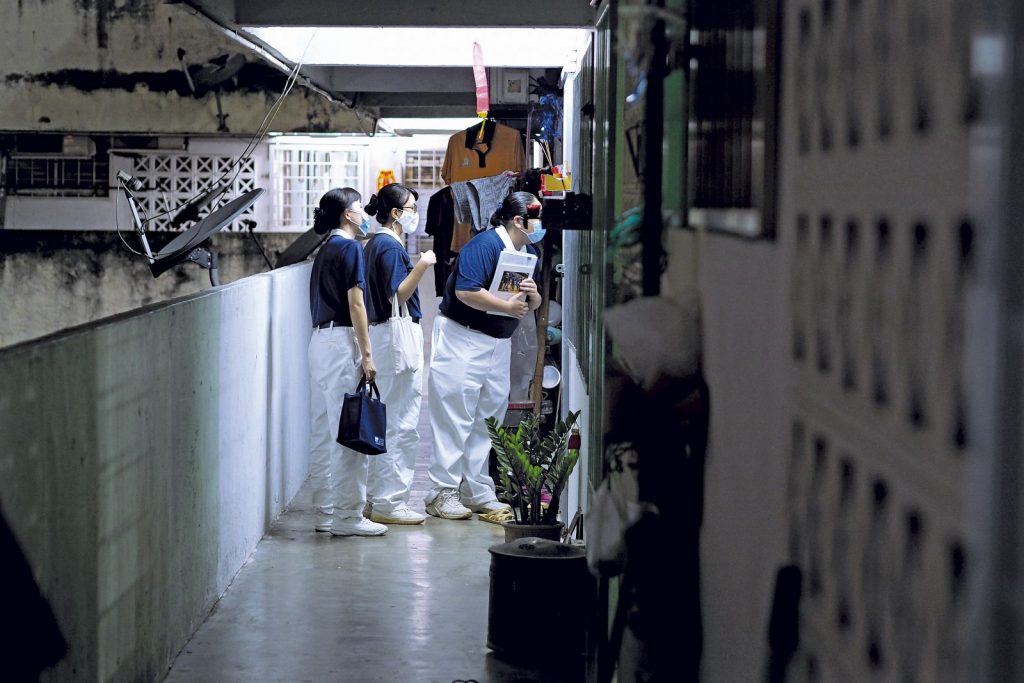 With precautions taken against the coronavirus, volunteers made home visits to learn about the situations of applicants for a Tzu Chi COVID relief program and provide them with appropriate aid. (Photo by Sam Pin Fook)

Of the nearly 4,400 applications received, 2,178 were granted, entitling the families to three months of financial assistance, from September to November. Each family received aid ranging from 300 to 800 ringgits (US$74-197) per month, depending on their situation.

Before volunteers visited the applicants, members of the Tzu Chi International Medical Association (TIMA) explained to them a comprehensive protocol prepared by TIMA for protection against the COVID-19 virus. Such procedures were for the benefit of volunteers and participating families alike. The risk of an infection during the visits could not be overlooked.

Volunteer Goh Kim Lan (吳金蘭), 71, convinced her family to let her participate in the home visits by promising them that she would be very, very careful in the process. Accompanied by her husband, she went to a police station to apply for a permit so that she could go on the visits. She was assigned to call on four families. The visits gave her a lot to think about. She learned how the economic situations of people, regardless of their race, had been affected by the pandemic. The pandemic is blind, impacting all—whether you are Chinese, Malay, or Indian.

Shine a Light in Dark Corners
Brickfields is known as Kuala Lumpur's "Little India." Indian shops and restaurants of all descriptions line the streets there. In their midst are more than 20 massage parlors which have provided a livelihood for many visually impaired people over the years. Seventy-six-year-old Yap Chee Ming (葉志明), a beneficiary of Tzu Chi's "Kita1Keluarga" program, lives and works here too. 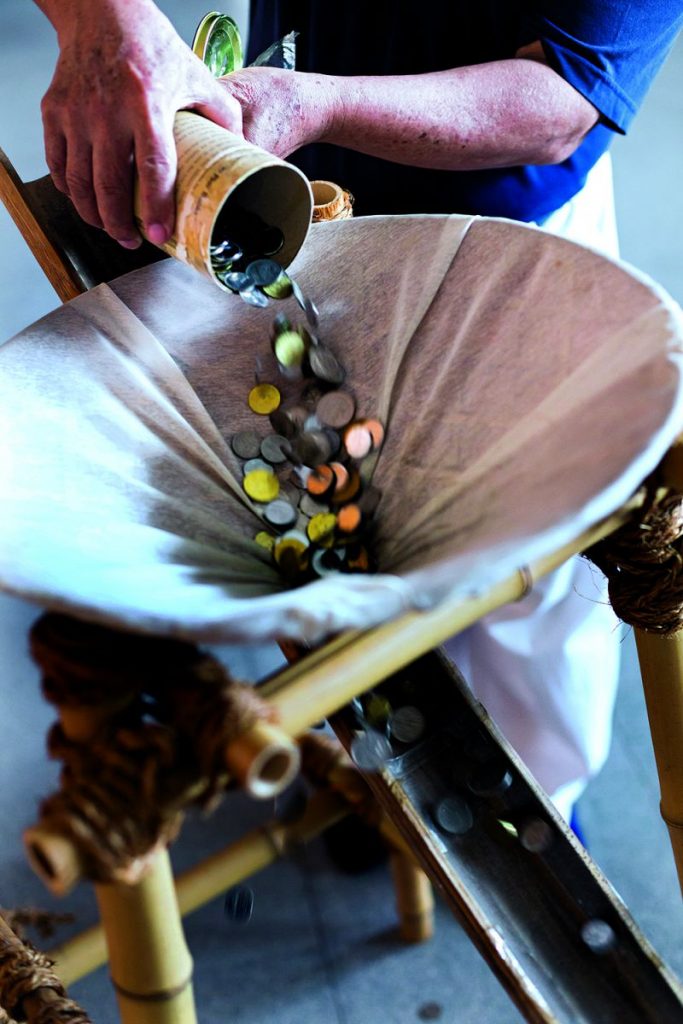 Volunteers conducted 95 gatherings during which people donated the money they had saved in their coin banks to help with Tzu Chi’s "Kita1Keluarga" program. (Photo by Sam Pin Fook)

Yap, his wife, and their two sons live on the third floor of a shophouse. Climbing the stairs up to his place was a little difficult for the Tzu Chi volunteers visiting him, even though they were much younger than Yap. They could not help thinking how much more difficult it would be for Yap—both elderly and blind—to negotiate the stairs. Once the volunteers had reached his home, volunteer Ho Sook Kuen (何淑娟) greeted Yap. He responded to her in a sonorous voice: "You're Ms. Ho, right?" The volunteers were surprised and taken aback at his sharp hearing, since he had no way of actually seeing Ho. He explained with a smile that he had been blind for nearly 50 years and had long since learned to tell people apart by their voices.

Yap's older son, 27, is a college graduate and holds a steady job. His wife and younger son earn some money doing simple packaging work out of their home. After the MCO was imposed, Yap went four months without any income. His older son had to provide for the whole family during that time.

Yap resumed working in July, but only made half of what he did before. Apparently, the caution to maintain social distance may have made people view massaging with a wary eye and consider it too close for comfort. His wife learned about Tzu Chi's relief program from the newspaper, so she asked their first son to apply online. Their application was granted.

"I'm grateful to Tzu Chi for noticing us disabled people in Brickfields and for sending people to help us," he said. "I'm really very happy." Despite being a recipient of the Tzu Chi aid, he worked hard to make money. Whenever a customer ordered his service, he took a taxi to work. Leaving his home raised his risk of infection, but he said, "I can't be choosy if I want to survive. Look at it this way: many restaurants in this area have shut down, and I'm lucky to still have work to do, so I must work extra hard."

After the "Kita1-Keluarga" program was initiated, volunteers from the Tzu Chi Entrepreneurs' Group worked hard to help raise money. Tzu Chi's efforts to help the underserved resonated with many company owners. They believed that businesses should at this time of crisis take up their social responsibilities to pay back society, so they readily chipped in to help.

To further support the program, volunteers held 56 charity sales and conducted 95 gatherings to which people brought their coin banks and donated the money inside. (Tzu Chi gives out coin banks and encourages people to save money in them and donate it to help the needy. This practice has its origin in the early days of Tzu Chi, when 30 housewives each saved 50 Taiwanese cents [1.2 U.S. cents] every day in a bamboo coin bank to help launch the foundation's charity work.)

Like the people who donated the money they had saved in their coin banks, Yap and his wife have since started putting their spare change into their bank for future donations. Yap shared a story: "A beggar had a dollar, but he donated 50 cents, or half of his entire wealth. On the other hand, a rich man donated a million dollars, which was only a fraction of his vast fortune. Of these two people, who do you think was more meritorious? My 50 cents may not have been worth much, but it was donated with my utmost sincerity." 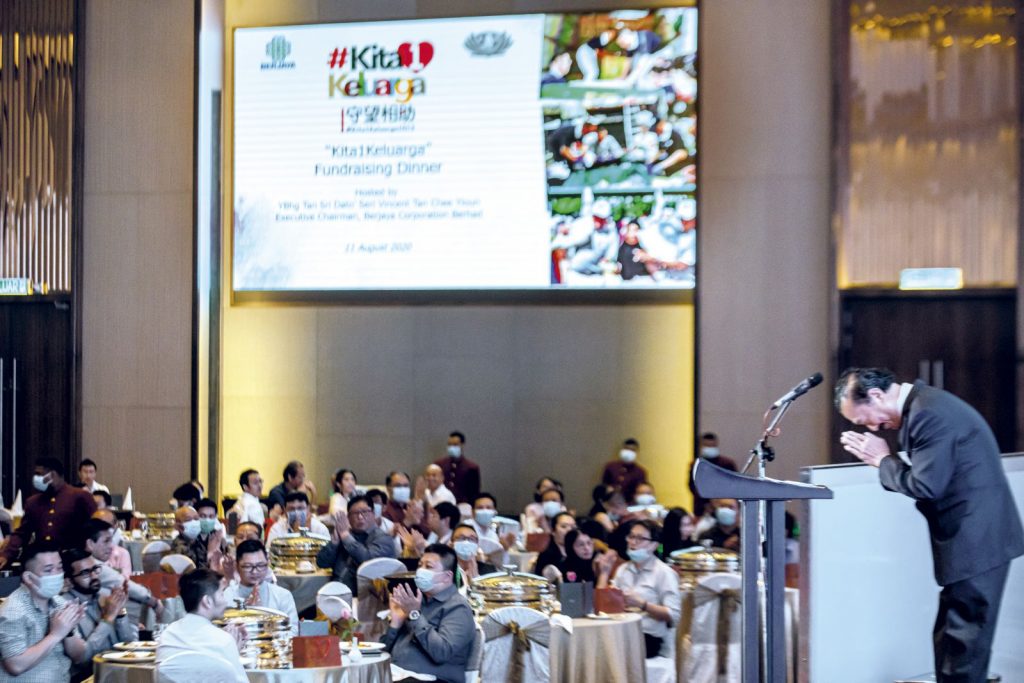 Tan Sri Vincent Tan Chee Yioun is a noted Malaysian-Chinese businessman and investor. He hosted a charity banquet during which he shared with the attendees the core values of Tzu Chi's charity mission and solicited their support for the foundation's "Kita1Keluarga" program. (Photo by Chua Teck Ching)