The sum benefit is greater than the parts when organizations of different religions work together to bring relief to the underserved. More people benefit from joint efforts than can be served by the organizations working independently.

"Master, the Tzu Chi spirit is very good, but Turkey is a Muslim-majority country, and I'm a Muslim. How do I take the Tzu Chi spirit there?" Faisal Hu (胡光中), then a 33-year-old Turkey-based Taiwanese businessman, posed this question to Dharma Master Cheng Yen in Taiwan in October 1999. 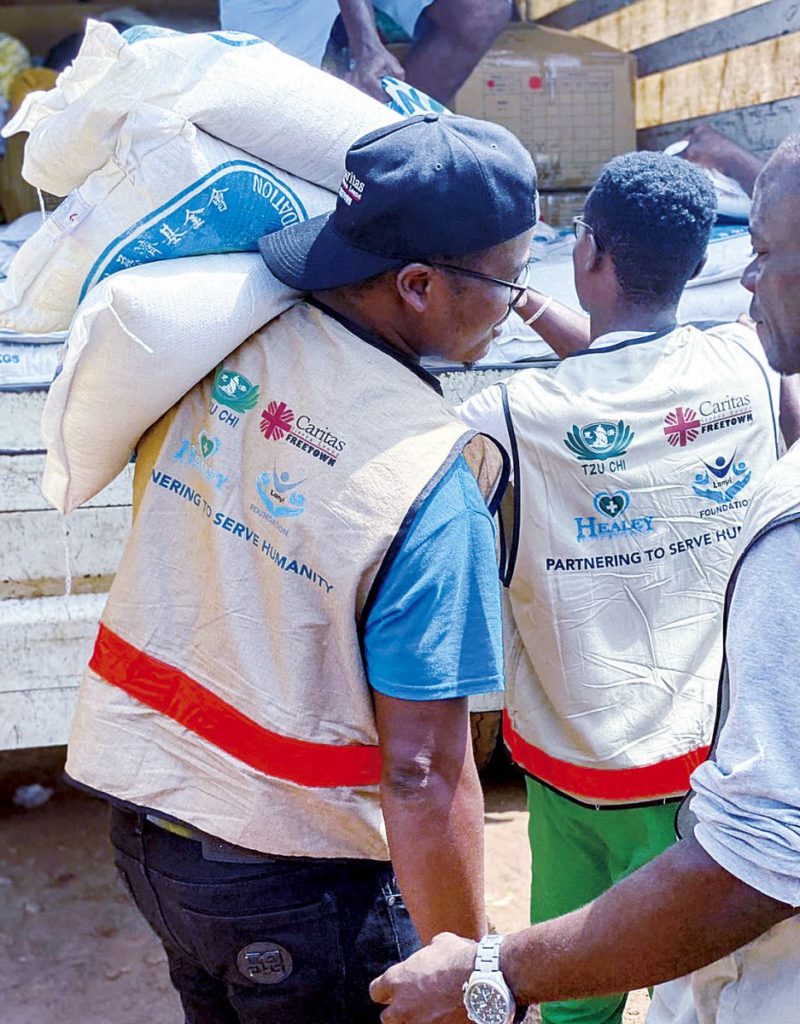 In March 2021, a fire ravaged a shanty town in Freetown, the capital of Sierra Leone, affecting more than 7,000 people. Tzu Chi worked with its partners in the nation to provide aid to victims. (Photo provided by Tzu Chi USA)

Tzu Chi at the time was deeply engaged in emergency aid operations following a massive earthquake that had devastated central Taiwan on September 21 that year. Though the Master was presiding over the operations in Taichung, central Taiwan, she took time out of her busy schedule to talk to Hu. Instead of directly answering his question, the Master talked about her younger days, back when she was carrying out her spiritual practice in Taitung, eastern Taiwan. She said that every day when she went out, she'd pass a church. "I wasn't a Christian," the Master said, "but every time I passed the church, I'd stop and take a deep bow [to show my respect] before proceeding to take care of the business that had taken me out."

She then pointed out that differences between races, languages, religions, and nationalities had created barriers between people. "But if we can let go of those differences and allow only love to stay, we'll be able to break down the barriers."

The Master's answer convinced Hu that his decision to join Tzu Chi was a wise one. He subsequently threw himself into his volunteer work for the foundation and has remained steadfast to his commitment to this day. The Great Love spirit of Tzu Chi, transcending religions and cultures, has inspired many people to join the foundation. It has also led many organizations of different religious faiths to work with the foundation to help the needy.

Debra Boudreaux (曾慈慧), the convener of the Tzu Chi United Nations task force, cited Tzu Chi's partners in Sierra Leone, Africa, as an example of the foundation's cross-religious cooperation with other organizations. In 2015, Tzu Chi had no branch offices or volunteers in Sierra Leone, so it began working with Caritas Freetown and the Healey International Relief Foundation to help underprivileged people there. The collaboration has provided significant aid for people in that country over the last five years. Tzu Chi has been able to provide folding beds, blankets, instant rice, multi-grain powder, and other aid to local medical clinics, orphanages, and welfare institutions. Deep ties have since developed between Tzu Chi and its partners in Sierra Leone.

"We've kept in close contact with the Catholic priests of Caritas Freetown," explained Boudreaux. "We've been able to help children orphaned by Ebola via the organization, and have distributed aid to flood victims in the aftermath of several floods."

When COVID-19 led to lockdowns around the world, Tzu Chi's cooperation with Catholic and other religious organizations enabled the foundation's aid to reach more people. Thanks to the help of their clergy and lay volunteers, Tzu Chi-supplied face masks, medical gloves, isolation gowns, and other PPE have been able to reach many people badly in need of such supplies. Their collaboration has also allowed Tzu Chi to help a lot of people financially hurt by the coronavirus pandemic. The partnering organizations even complied with the foundation's request to compile recipient rosters. Debra Boudreaux thanked the religious organizations that have worked with Tzu Chi, allowing the love of Tzu Chi to reach areas Tzu Chi volunteers would not have otherwise been able to reach. 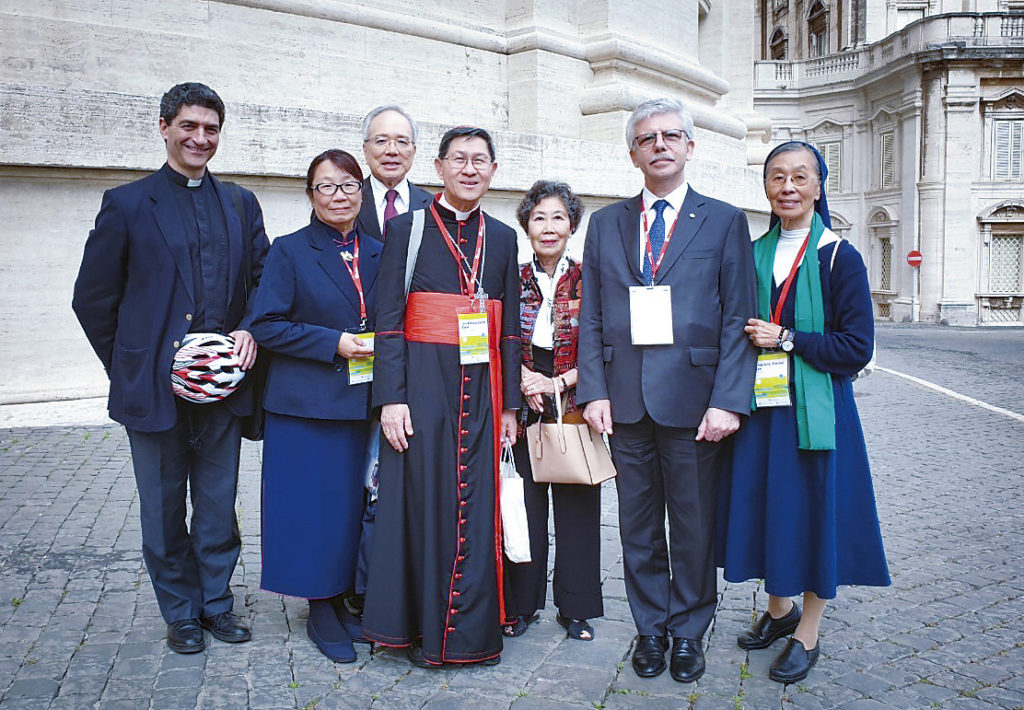 Debra Boudreaux (second from left) of Tzu Chi poses with Sister Emma Lee (far right) of Caritas Taiwan and other attendees of the General Assembly of Caritas Internationalis in 2019 in the Vatican. Tzu Chi's cooperation with Caritas had led to Tzu Chi volunteers being invited to the event. (Photo by Huang Jing En)

A Shared Mission
In April 1966, before Tzu Chi was established, three Roman Catholic nuns visited Master Cheng Yen, and they had a discussion on the teachings of their respective religions. When the Master explained that Buddhism taught compassion and love for all living beings, the nuns commented that the Catholic Church had schools, nursing homes, orphanages, and hospitals, and that priests and sisters were even helping the poor in remote mountain areas. They asked the Master, "Why haven't we seen Buddhists engaged in similar good works for society?"

The question from the nuns struck such a deep chord with the Master that it even helped lead to the establishment of Tzu Chi.

This episode is well-known by almost all Tzu Chi volunteers. Talking about it, Sister Emma Lee (李玲玲) of Caritas Taiwan lauded the three spiritual sisters that had visited the Master in 1966: "They helped the Master see farther, and inadvertently helped bring Tzu Chi into being. That being said, Tzu Chi couldn't have happened if the Master wasn't a sage herself." 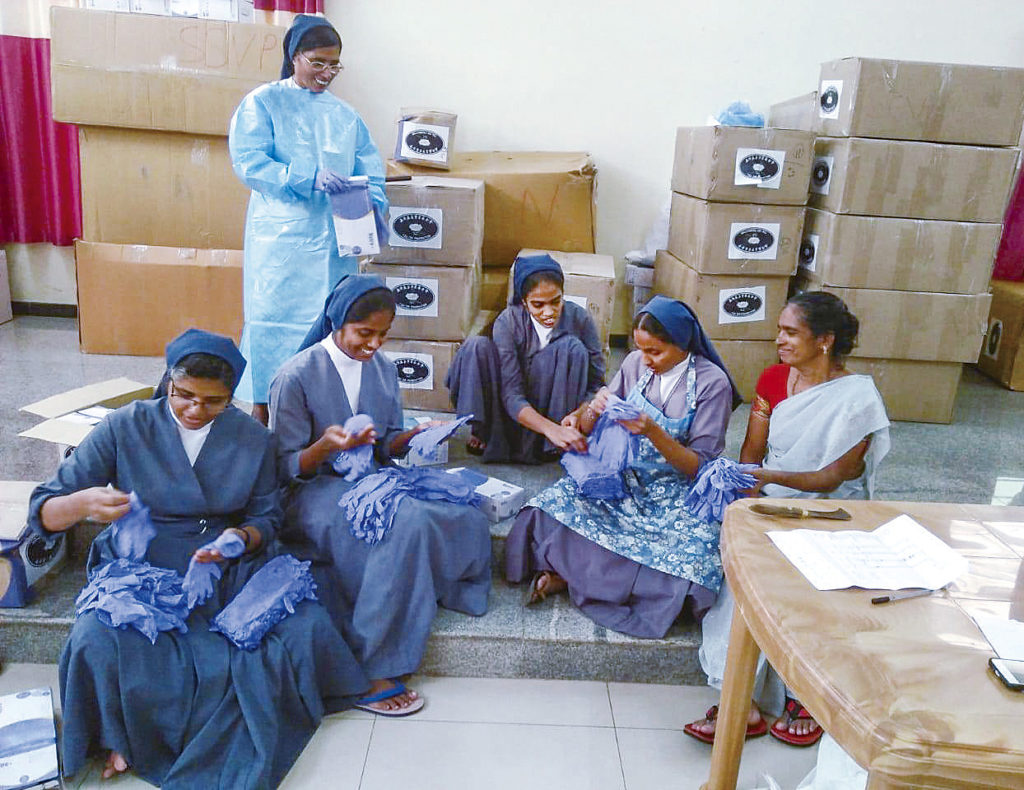 Sisters of the Vincentian Family in India prepare Tzu Chi-provided goods for distribution to the needy in India affected by COVID-19. (Photo provided by Tzu Chi Hualien headquarters)

In 1965, the Second Vatican Council published the Declaration on the Relation of the Church with Non-Christian Religions (Nostra Aetate), a rethinking of the Church's attitude toward other religions. The document opened up relations between Roman Catholicism and non-Christian religions. Encouraged by the declaration, Taiwan's Catholic Church began strengthening exchanges, especially in the social services, with non-Christian religious organizations in Taiwan.

This led the Church to invite Tzu Chi in October 1993 to co-host workshops on interreligious dialogue and cooperation. The person that recommended Tzu Chi to the Church was Sister Emma Lee. She explained the reason why they decided to work with Tzu Chi: "We believe in God's love and grace for wise non-Christian religious leaders. Since they have God's love and grace, the organizations they have established must embrace the truth, and that makes interreligious dialogue possible."

In January 1994, a social work workshop was co-hosted by the Catholic Church and Tzu Chi at the Tzu Chi College of Nursing (now the Tzu Chi University of Science and Technology) in Hualien, eastern Taiwan. The event centered on discussions and exchanges of experiences on whole person care, hospice, crime prevention, social participation, and other issues. Ritual ceremonies were split between Buddhist and Christian traditions. "If we held a Christian morning prayer in the morning, then we arranged a Buddhist evening service in the evening. The next day, we switched the order—a Buddhist morning service and then a Christian evening prayer. The whole experience was very beautiful," Sister Lee fondly recalled.

The interactive exchanges and ties between the two religious groups have persisted to this day. The latest instance of cooperation occurred at the end of 2020, when Tzu Chi donated winter clothing, blankets, socks, and wool hats to Caritas Taiwan for distribution to foreign fishermen working on Taiwanese boats. Lee personally attended the donation event. She uses the term "the Good Samaritans" from the Bible to describe the Tzu Chi volunteers she knows, and she stresses the importance of putting the teachings of one's own religion into practice. "The love of Christ urges us to help others. This is what we must learn."

Tzu Chi's cross-religious cooperation with other organizations allows the combined manpower and resources from both sides to benefit more people, exemplifying the truth that the whole is greater than the sum of its parts. Such cooperation is also part of the reason why Tzu Chi's footprints of charity have reached 122 countries and regions around the world. Like Master Cheng Yen says, Tzu Chi and its partner organizations share a mission that is backed by selfless Great Love. Let's hope that such selfless cooperation continues to ripple out and benefit more and more people. 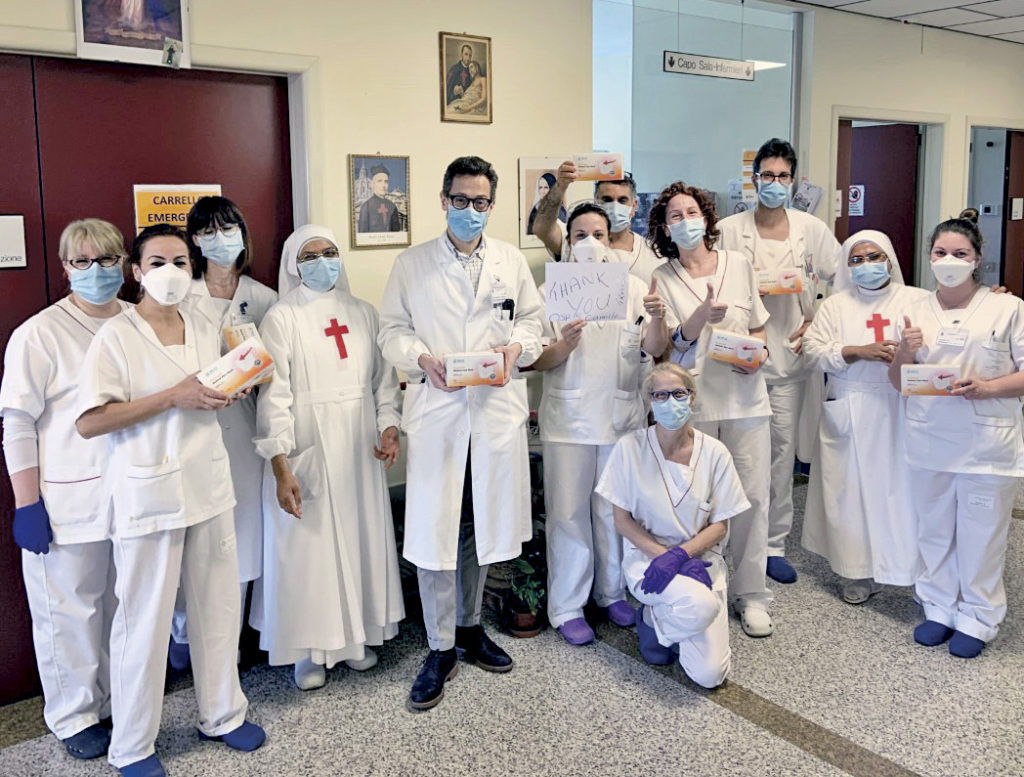 With the help of Fr. Giuseppe Didone, an Italian priest of the Camillian Order who has served in Taiwan for over half a century, Tzu Chi donated 20,000 medical masks to Fondazione Opera San Camillo in Italy in April 2020 for the use of medical workers. (Photo provided by Tzu Chi Hualien headquarters)