A building in Chinatown, San Francisco. The upper floors house SRO residences, typically rented out to people with low incomes. Behind each window is an SRO unit.

San Francisco is a bustling metropolitan city that offers beautiful scenery and a mild maritime climate year-round. It’s long been a favorite destination for tourists from all over the world. They come for the city’s spectacular views, its iconic architecture, its culture and history. One of the city’s best-known tourist attractions is its Chinatown. Established in the 1840s, this densely populated area is the oldest Chinatown in North America and the largest Chinese community outside of Asia. It has served as a gateway to the U.S. for many immigrants of Chinese ancestry over the years, some staying temporarily before moving to other locations in the U.S., others settling permanently to build a new life.

With its Asian-inspired architecture and numerous shops and restaurants, San Francisco’s Chinatown attracts more visitors annually than the Golden Gate Bridge. But the visitors aren’t just tourists—local Chinese people like to visit the place too, to shop for daily necessities and food ingredients. They also come when they miss home and are craving the sights, smells, and tastes of cuisines originating from their homeland.

Behind Chinatown’s prosperous facade, however, are the many underprivileged people crammed into tight living quarters—the so-called single-room occupancy tenants.

Unaffordable housing
Single-room occupancy (SRO) is a form of housing that typically caters to people with low or minimal incomes. An SRO hotel can contain more than ten or 20 units, each smaller than 107 square feet. Costing only one-fifth to one-tenth of the average rent, it is the “housing of last resort” for people of limited means. For these folks, it is often a choice between living in an SRO residence or becoming homeless.

An SRO unit can house a single individual or be home to an entire family. The bedroom usually doubles as a living room, a drying room for laundry, and a baby’s nursery. A dining table also serves as a desk. Bunk beds are common in the cramped spaces. Tenants typically share communal kitchens and bathrooms. Some rooms are equipped with washbasins, which allow the tenants to freshen up or wash some clothing by hand without having to leave their units.

Because kitchen and bathroom facilities are shared, tenants must stagger their access to the facilities and usually work out a schedule among themselves. A communal kitchen, for example, is used almost 24 hours a day: those who don’t work use the kitchen during the day, while those who do work cook at night.

The entire layout and furnishings of an SRO unit can be captured in a single glance. There is usually no private bathroom. Fifteen to 20 households share two bathrooms and a kitchen.

Liang, an SRO resident originally from China, moved to the United States in 1966 after marrying a man from the U.S. Her entire family, including her husband, mother-in-law, and children, are ethnic Chinese born and raised in America. Liang does not speak English. For the last 54 years, she has communicated with her family with body language.
She now lives alone in an SRO unit in Chinatown. She wants to stay because people there speak Chinese, she has friends there, and it’s a convenient location for grocery shopping or running other errands.

Ma, another SRO tenant, has lived in the same SRO hotel for more than four decades. He moved from Myanmar to Taiwan before eventually settling in San Francisco with his entire family. His mother, now in her 90s, lives in an assisted living facility. Ma used to help manage the SRO units in his building. He said the rents there used to be remarkably cheap—less than 80 U.S. dollars a month—but now they’ve risen to more than 400 dollars a month.

The last four decades have witnessed a change in the kind of people who reside in SRO’s. Such housing used to be dominated by older people of Chinese descent, but now younger people of all kinds of ethnicities live there too. This is a result of the expensive housing costs in San Francisco. Younger people who can’t afford higher rents have no choice but to move into an SRO hotel.

Huang is another SRO resident. Her room is considered “luxurious” compared to other SRO units. It has a full size refrigerator, an area where she can do some basic cooking, and three windows—one of which she uses to sun-dry her laundry. She has lived in her unit since she emigrated from China to San Francisco more than ten years ago, during which time her rent has increased from more than 400 dollars to the current 585 dollars.

One day she opened her door to see a small group of Tzu Chi volunteers right outside her room. As soon as she saw them, she said, “I know about Tzu Chi! I’ve read in the paper that Tzu Chi volunteers are delivering lunches to SRO tenants.” She showed the volunteers a news article about the meal delivery service she had seen on her cell phone. She explained that she had been too slow to sign up for the meal delivery service organized by the city government during the pandemic, so she was preparing three meals in her room every day. She expressed her wish that Tzu Chi could also deliver a vegetarian meal to her once a week. “I like vegetarian food,” she said. “Eating vegetarian is healthy.”

The volunteers told Huang that Dharma Master Cheng Yen, the founder of Tzu Chi, was sympathetic for people whose lives had been affected by the pandemic. To help out, she had sent some instant rice from Taiwan to the United States to distribute to those who needed it. “As soon as we receive the rice,” the volunteers said, “we’ll visit you and other tenants again.” Huang was happy when she heard that, and she said she’d look forward to their next visit.

SRO residents are mostly elderly or disadvantaged people. They don’t need much, just some care from society.

Social distancing made difficult
The United States has been hit harder than any other country in the coronavirus pandemic. To prevent the spread of the disease, people are urged to observe a social distance of six feet (1.8 meters). Such a precautionary measure is difficult if not impossible to practice in the tight living quarters of SRO’s. Shared facilities only increase the possible transmission of the virus. 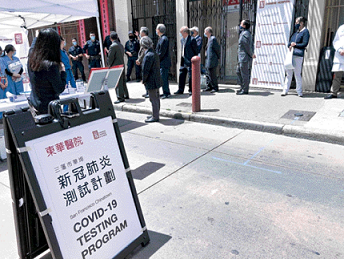 Because many infections are asymptomatic, the San Francisco city government and Chinese Hospital in Chinatown started a free COVID-19 testing program for local SRO tenants in May to prevent outbreaks. The government also launched a meal delivery service in partnership with local organizations for SRO residents to decrease the chance of transmitting the virus through the use of shared kitchens.

Tzu Chi was one of the organizations participating in the meal service. For nine weeks, until the end of June, they delivered vegetarian meals every Monday to SRO tenants.

Monday, May 11 was one of the delivery days. That morning, five volunteers went to a restaurant and packed 50 lunches consisting of chow mein, spring rolls, rice noodle rolls, and tofu mixed with vegetables. The food was appetizing, fragrant, and attractive. The menu had been decided on by participating tenants.

After they finished packing, the volunteers delivered the food to the SRO households who had signed up for the meal service. The volunteers also gave the SRO tenants cloth masks and encouraged them to take part in the COVID-19 testing program.

Tenant Xie Xue-yan (謝雪豔) told the volunteers that she has known about the foundation for many years. Her two children study at Gordon J. Lau Elementary School, where Tzu Chi has distributed food once a week for 12 years. She expressed her gratitude to Tzu Chi for the weekly distribution, saying that it has eased the financial burden for many families. Her family had also received financial aid from the foundation intended to help them through the pandemic. “We’ve just received your gift card and cloth masks,” she said. “Thank you, Tzu Chi.”

Gift cards
The San Francisco city government started its shelter-in-place mandate on March 17. Students began distance learning online after schools were closed, but many students from underprivileged families depend on their schools for breakfast and lunch to keep from going hungry. The school closures threatened this very necessary source of food, without which kids would go hungry.

Gordon J. Lau Elementary School is the largest grade school in Chinatown. According to school administrators, there are nearly 200 students in the school classified as “homeless.” This is because the local school district classifies students who live in SRO units as homeless. They have decided that a single room with a shared bathroom and kitchen isn’t enough to constitute a home. Additionally, students that are living with friends or relatives are also counted as homeless. No matter the reason, it is a difficult and unpredictable existence for these students.

School staff appealed to the local community to help these students and their families weather the pandemic by providing them with shopping vouchers so that they could purchase food and other necessities. Tzu Chi volunteers contacted the school principal and social workers when they learned of the students’ need for help. They were told that after launching a fundraiser in the community and working for three weeks, the school had raised only enough money to help 150 families.

Tzu Chi volunteers deliver vegetarian meals to SRO tenants while the food is still hot. The food was prepared by a restaurant in San Francisco’s Chinatown.

Tzu Chi decided to distribute gift cards to the remaining 50 families to help them out. Since this was during the shelter-in-place order, volunteers couldn’t visit the families in person; instead, they could only contact them by phone or text. To ensure that the families received the gift cards provided by Tzu Chi, volunteers first called them to confirm their addresses and identities before sending them the cards. Then they contacted them again to check that the cards had reached them safely. Only when receipt was verified would volunteers deposit 100 U.S. dollars into a card. This way, they could be positive that the financial aid didn’t fall into the wrong hands.

A week later, school administrators asked Tzu Chi for more help. They said that an additional 20 students from extremely indigent families needed aid too. In the end, the foundation helped a total of 69 students.

Through the food and monetary aid during the pandemic, volunteers hoped the underserved could feel some love and care from society.