A New Leg, a New Life

A New Leg, a New Life

Life threw him a curveball when his leg was amputated, but love and care from others helped him get back on his feet. 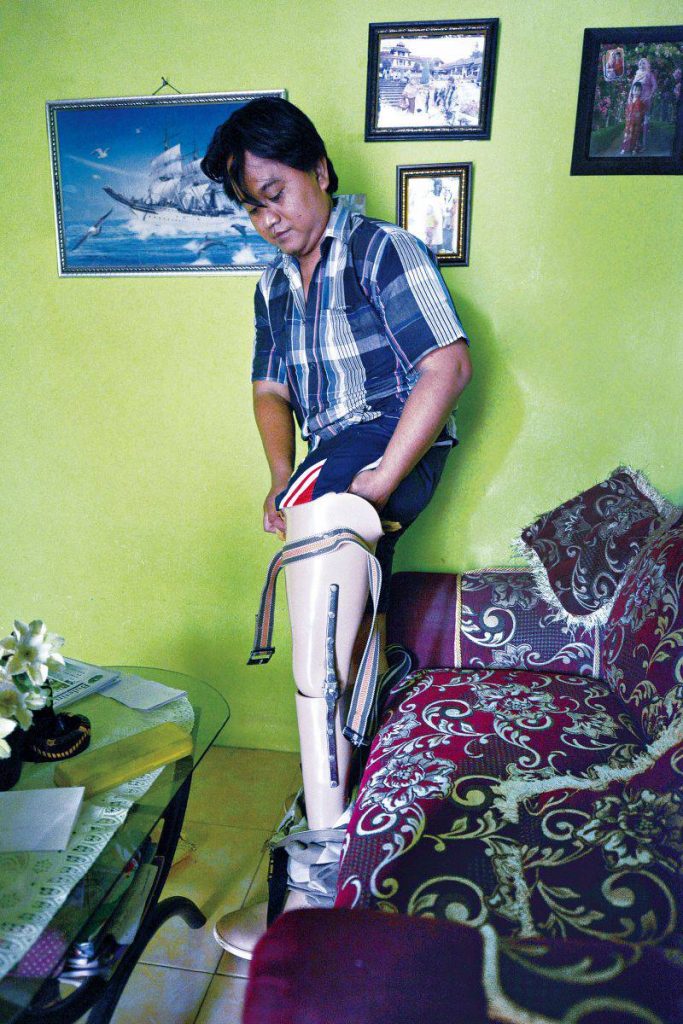 Anton is grateful to Tzu Chi for helping him get a prosthetic leg, thus enabling him to walk again.

Anton, 36, wears a friendly smile as he tends to the customers patronizing his vegetable stall. He looks no different from any other man his age. It’s only when he moves around that you might notice that his gait is different.

He lives in the village of Karang Rahayu, Cikarang, West Java, Indonesia. His working days are long. He goes to the Cibitung wholesale market every night from 11 p.m. to one the next morning to stock up on vegetables for his stall. He opens his stall in a traditional market between six and eight a.m. Offering water spinach, spinach, chilies, shallots, bottle gourds, and other vegetables, his stand is a display of rich colors.

Anton appreciates the life he is leading now, though he once felt so depressed that he wanted to take his own life.

An Accident before Eid al-Fitr
August 18, 2012—the eve of the Muslim holiday Eid al-Fitr that year—is a day Anton will never forget. He was going grocery shopping for his mother for the holiday when disaster struck. As he was crossing a street, a speeding minibus seemingly appeared from nowhere and knocked him flying. He landed in the street, only to have his left leg run over by a motorcycle.

Luckily Anton survived, but his left leg was in bad shape. Because it was during the Eid al-Fitr holiday, many medical workers had returned to their hometowns to celebrate with their families. Anton was unable to receive good treatment at the hospital, so his family decided to take him home and seek alternative therapies for him. “Who was to know that when my cast was removed at home, we’d discover that my leg had already rotted,” Anton recalled.

His family did their best to try to nurse him back to health, but after eight months’ treatment with alternative medicine, his leg still wasn’t better. Too poor to afford medical attention at a hospital, he resorted to getting by on antibiotics. Finally, in 2014, he learned from someone he knew about Tzu Chi, and so he applied to the foundation for help.

The volunteers who visited him for assessment decided to provide him with financial aid. They also accompanied him to a hospital in Jakarta for medical attention. Thankfully, the infection in his leg hadn’t yet spread to other parts of his body. He received four operations over the next nine months. Even though he walked with a limp after he healed from the surgery, he was finally able to stand and return to work. He continued selling vegetables at the market. It was at the market during this time that he met his future wife, Napiah.

A Wife Who Stands by Him
Sadly, Anton’s life didn’t remain peaceful for long. Just a year later, in 2015, he noticed a small sore on his left leg. The wound gradually grew bigger. He dressed the lesion himself and it healed a few months later. Much to his dismay, however, he found a second, larger lesion on the back of his left leg a few weeks later. What’s worse, it rapidly deteriorated. The badly infected sore led to recurrent fevers. Anton had no choice but to seek medical help.

Indonesia had launched a national health insurance program in 2014, but not all medical costs were covered. Thinking that he wouldn’t be able to afford treatment and the transportation fees to go to a larger hospital, Anton visited a free health center for treatment. A doctor at the health center told him that his leg had to be amputated to save his life, and that he would need to be fitted with a prosthetic leg afterwards. The artificial limb alone would cost 30 million rupiah (US$2,000).

Anton’s heart despaired when he received the doctor’s news. Though the amputation would be covered by the national health insurance program, where was he to get the money to pay for the prosthetic? The thought of losing his leg and his mobility distressed him so much that he even thought of ending his life.

He told his wife to take their child and go back to her maiden home. He said that he wouldn’t be able to support them and give them a good life. But Napiah wouldn’t hear any of that. She said to Anton, “When I married you, I’d made up my mind to be there for you through thick and thin. How could I leave you now, when you’re most in need of my support?”

At the end of his wits, he contacted Tzu Chi for help again. Volunteer Veriyanto The, from Cikarang, helped care for him this time. He remembers that Anton called him repeatedly before they were due to meet for the first time. “I could tell he was suffering in agony and was in dire need of help,” said Veriyanto, “so I cancelled several meetings that day and rushed to his home to check on him.” When he arrived, Veriyanto saw Anton’s leg wrapped in a cloth, his sore stinking and oozing pus.

Just like the first time around, Tzu Chi stepped in to help after learning of Anton’s situation. Veriyanto and other volunteers accompanied him through his surgery and recovery. The foundation also paid to have Anton fitted with a prosthetic leg after his amputation.

Napiah, as she said she would, stood by him throughout it all. She often took him on a motor scooter during this time to receive treatment. They would draw curious looks, but she didn’t mind at all. “There is nothing to be ashamed of. My husband can’t get around on his own. It’s a matter of course that I should give him a supporting hand,” said Napiah.

With her love and Tzu Chi volunteers’ encouragement and financial assistance, Anton pulled through this hard time in his life. He began to believe that he’d be able to go back to his old life and continue to fulfill his responsibility for his family. 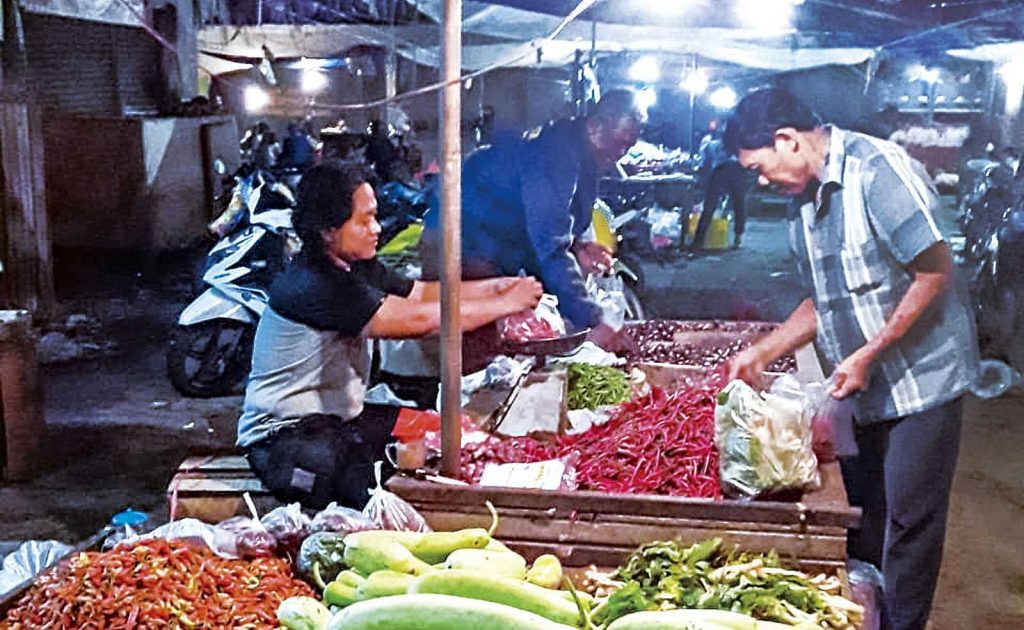 Anton cherishes being able to go back to his old ordinary life.

Back on His Feet
Though Anton can’t move as easily as before with the prosthetic, his artificial limb has allowed him to return to a normal life. He said cheerfully that he can now ride a scooter to the Cibitung market to purchase vegetables for sale, set up his stall on his own, and clean up afterwards. He relishes being independent and not having to rely on others. The expressions of sorrow and pain on his face are gone, replaced now by a bright smile, with which he greets and tends to his customers every morning.

“I’m determined to give my wife, children, and mother a good life and make them happy,” said Anton. “They are my strongest motivation to keep going.”

He thanks Tzu Chi for helping him get a prosthetic leg and regain his mobility, and he says with gratitude that volunteer Veriyanto has given him a lot of encouragement and support along the way.

Anton’s business is doing well. He has been able to improve his family’s finances and renovate his house little by little. He even donates part of his income to Tzu Chi so that he can help others in need.

Anton encourages people with disabilities not to dwell on the negative. He suggests that they participate in activities that can lift their spirits or even try to run a small business. For one thing, staying occupied is a good way to prevent one’s thoughts from getting caught up in the negative; for another, it is emotionally rewarding to be able to live on one’s own strength. As Anton knows full well, there is truth in the saying: “You have to fight through some bad days to earn the best days of your life.” 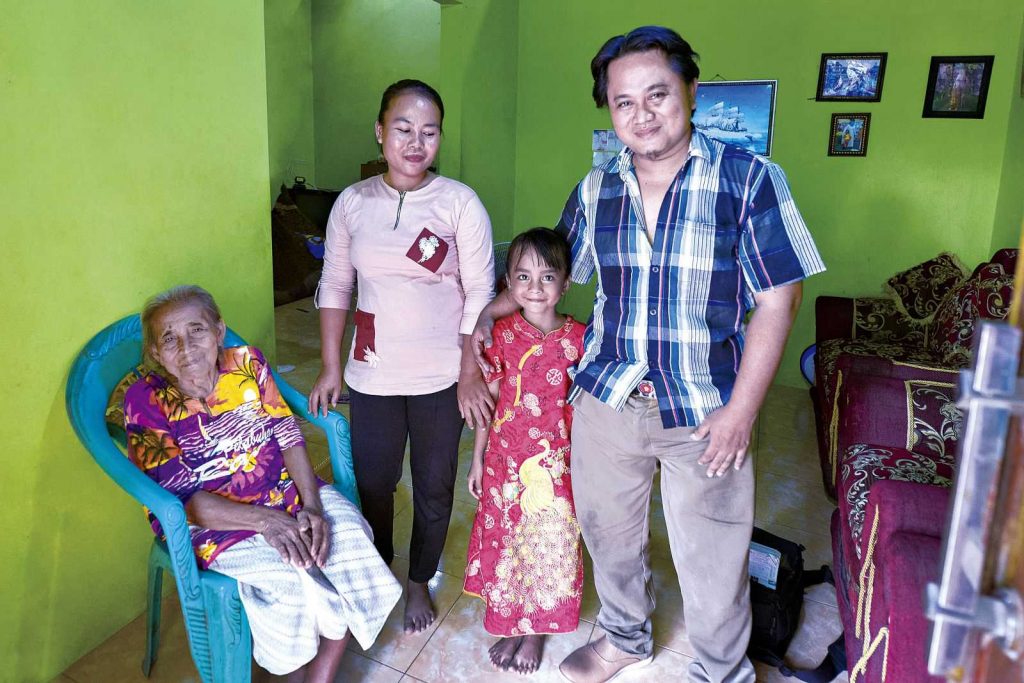 A bright smile has replaced sorrow and pain on Anton’s face. Providing his family with a good life is now his strongest motivation to keep going.