In the last 20 years, massive deforestation has taken hold in Europe, where illegal logging is often done by international mafia associations, large corporations operating in the timber sector, and with the complicity of governments.

In recent years, illegal deforestation headed by the mafia has been threatening the last of the virgin forests in Europe.

Europe is close to losing its last virgin forests.

The massive exploitation of forests all over the world has put the entire planet in crisis. We have become sadly used to seeing images of destroyed forests from Amazonia, Nigeria or Indonesia. But massive deforestation doesn't just happen in economically developing countries. In the last 20 years, it has also quickly taken hold in the old continent, where illegal logging is often done by international mafia associations, large corporations in the timber sector and low-cost furniture factories, with the complicity of governments.

The illegal timber market is the fourth largest criminal enterprise in the world after drug trafficking, counterfeiting and human trafficking.

The value of forest crimes in Europe is estimated at a staggering 60 billion dollars a year. Between 2014 and 2016, the illegal market increased by 26%. The phenomenon is not only far from regressing, but even booming. By deforesting, the corporations involved save enormous costs of transoceanic transport, as almost all of their customers are in the old continent, and they also manage to cross borders by bribing local police in collusion with the mafia.

As Western European countries have tightened their internal regulations and are unable to meet their need for timber on their own, the vast majority of deforestation takes place in countries like Serbia, Ukraine, Poland, Moldova, Estonia and especially Romania. While the largest importing countries have set up organizations to control the timber production chain, it is still very difficult to establish whether a piece of wood, raw or worked, is legally authorized or of mafia origin.

Located in the heart of Europe, Romania's virgin forests play an important role not only in the continent's weather conditions, but also the global climate.

Two thirds of virgin forests in Europe are found in Romania, and they create a unique ecosystem that is home to around 30% of Europe's large carnivores such as bears, wolves and lynxes. According to the Environmental Investigation Agency, these animals are the most seriously threatened by illegal logging. To date, 366,000 hectares of forest have already been illegally cleared. An area twice the size of London.

The National Forest Inventory of Romania states that the most alarming figure to date is the percentage of illegally cut wood compared to that granted by the state permits agreed with the European community. Over 50% of all timber cut in Romania was illegally harvested. It's a huge loss for the environment, the climate, and for the local economy. And with the wild Amazon-style deforestation, imposed with violence, the destroyers of Romanian forests endanger the survival of many rare fauna, often at risk of extinction.

Ecologist Mihai Zotta of Conservation Carpatia said that this is a very serious threat to the climate of the entire continent as Romanian natural forests play a decisive role in the European climate, given their large extension and strategic position in the heart of the Europe.

With no qualms, the mafia operating in this sector is very violent and unscrupulous, destroying nature and subduing the local population, often by bribing law enforcement and politicians. In fact, since 2014, six rangers have been killed while guarding the Romanian forests. Many others have been beaten or threatened. In total, there have been around 200 attacks on rangers in recent years.

Liviu Pop was shot and killed while investigating a case of illegal logging in the district of Maramureș, one of the most violent areas in the north of the country. This violent act has sparked major protests across the country, which eventually led to the Romanian parliament approving a law that allows forest rangers to carry a gun with them at work. Still, given the high level of violence, few civilians try to stop the mafia's forestry activity.

Kronospan, the largest international brand for wood-based panels, has a factory in Romania.

In Ukraine, the forests in the Chernobyl Exclusion Zone and along its entire perimeter record high radiation levels and the tree barks carry heavy metals released from the nuclear accident.

The Ukrainian state-owned company, and small private companies as well, not only deforest in areas bordering the zone, but also illegally inside it. The wood is not only used for export, but also to power stoves for heating and for the production of energy at a biomass plant in Ivankov. According to Green Report, a local activist organization has estimated that 50% of the trees come from contaminated areas. The combustion of these trees releases into the air the heavy metals from the nuclear disaster. This causes a new fallout, spreading these highly toxic and dangerous substances throughout the territory.

Even in Scandinavian countries, there are also issues caused by deforestation. The boreal forest ecosystem accounts for nearly a third of the remaining forests on Earth. These forests are inhabited by the last European indigenous population, the Sami. There are about 75,000 people in the northern part of Fennoscandia, in an area they call Sápmi. Reindeer farming is one of the pillars of the culture of the Sami people, who have lived in the forests of northern Scandinavia for generations.

Finland's state-owned timber factory, Metsähallitus, cuts the trees in these forests to produce pulp for Western countries in the production of quality paper, disposable handkerchiefs or kitchen towels. Though the production is legal, it's a great impact on the Sami and their millenary traditions. The deforestation of these forests also involves the destruction of the lichens that the reindeer feed on. Consequently, in order to survive, the Sami are forced to change and emigrate to other areas.

With the disastrous effects of forest destruction already evident and significant, there is an absolute need for the European community and its companies to review their policies, intervene and plan for the future. These are crucial steps that should be acted on immediately to leave a livable planet for future generations. 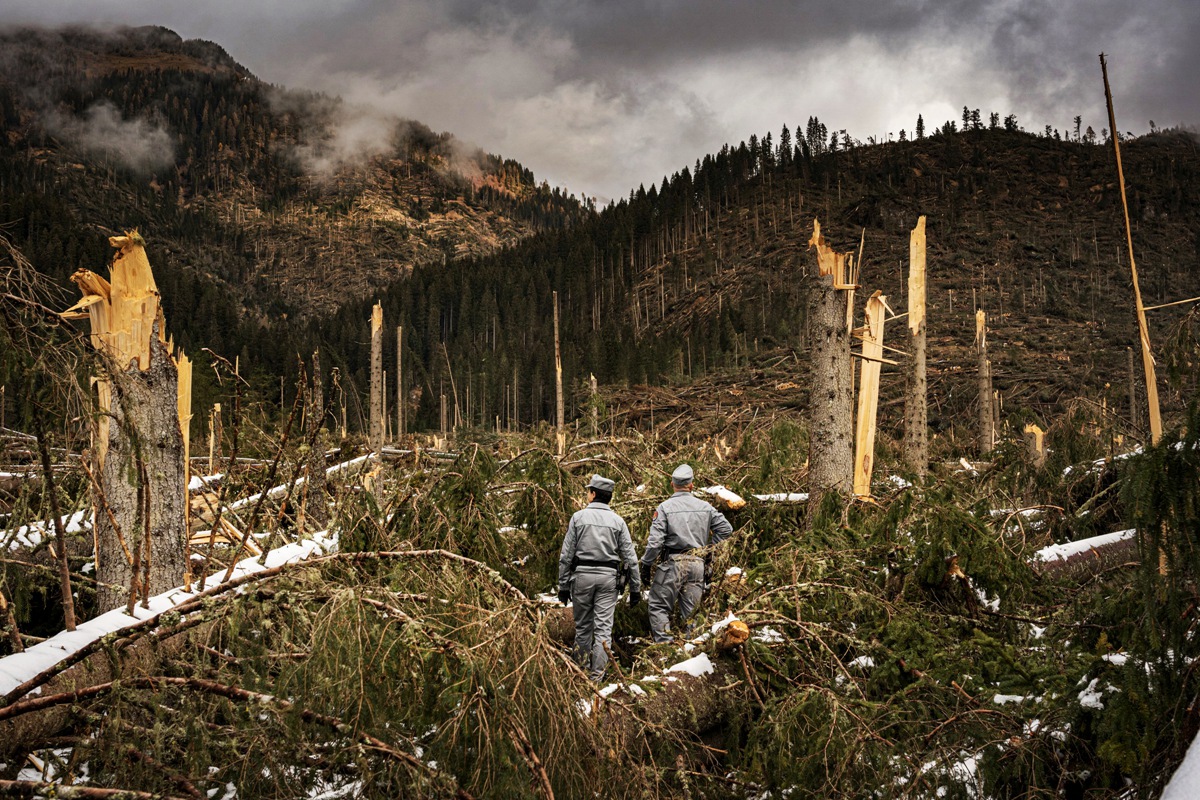 In Northern Italy, a storm has destroyed 1,400 trees overnight, and it is estimated to take at least 100 years for the forest to return to its original state.