Kalmykia: The Tibet of Europe

Kalmykia: The Tibet of Europe

In the Republic of Kalmykia, the only Buddhist nation of Europe, followers of Tibetan Buddhism, Orthodox Christianity and Islam live in peace and harmony with one another. 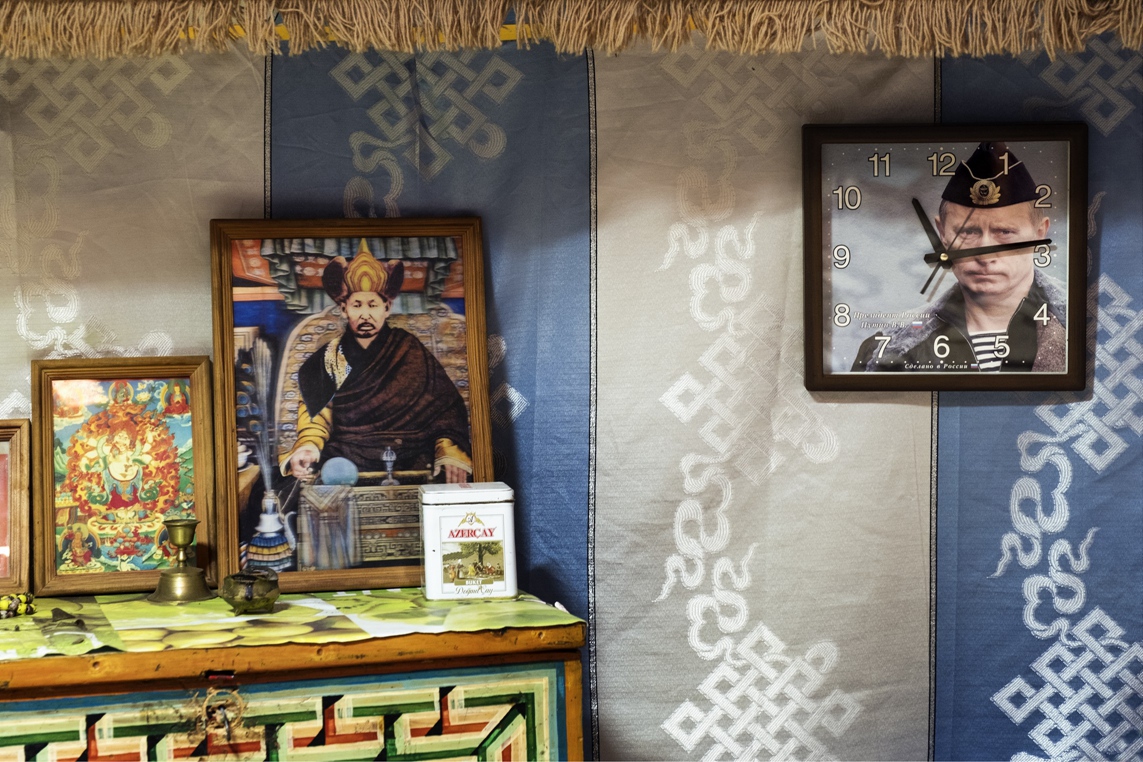 Inside a yurt in Yashkul, sacred Buddhist images share space with a clock depicting Vladimir Putin in his military uniform.

"When I want to be alone for a while and meditate, I like to come here. I feel a connection with my people's past." Together with our guide Dasha, we stand on a man-made hill on the outskirts of Elista, capital of the Republic of Kalmykia, one of the 85 state entities that make up the Russian Federation.

After the dissolution of the Soviet system, Lamaist Buddhism was fundamental to the reconstruction of Kalmykia. Today, the small Russian republic is the only region in Europe with a Buddhist majority, and it was the Oirats, the direct ancestors of the nomadic Mongolian Caleducians, who brought the Tibetan culture to the banks of the Volga. As the Oirats migrated from their homeland, they started to embrace the Vayrajana Buddhist faith according to the teachings of Lama Tsongkhapa in the 14th century. For two centuries, Buddhism remained a fundamental to the local culture, encountering no obstacles or opposition.

Things changed in the 19th century, however, when the Russian Empire imposed Russification and sedentarisation in the Caucasus and North Caucasus regions. With the establishment of the communist system, the Soviet Party's widespread laicization forced the Kalmyks to abandon their remaining Buddhist customs and integrate into the new secular state.

The trend was not reversed until the implosion of the USSR, after which Kalmykia managed to maintain its status as an autonomous entity in the newly formed Russian Federation. Those were years of great change. In 1993, Kirsan Iljumžinov was elected president and he revived Tibetan Buddhism so that it would play a central role in his people's daily lives.

In 1991, at the invitation of Iljumžinov, the 14th Dalai Lama Tenzin Gyatso came to the region on an official visit and have since placed Kalmykia on his political agenda. The Tibetan spiritual leader also personally chose the area to build the large Geden Sheddup monastic complex, inaugurated in 1996 and located between the capital Elista and the village of Arshan.

The growing spread of religious sentiment among the Kalmyks, including the younger generation, soon created demand to build a new sacred place that was more central. Thus was born the Burkhan Bakshin Altan Sume Golden Temple in Elista, which is still the largest Buddhist centre in Europe today.

A bride poses in a white dress in front of the Golden Temple in the capital city of Elista. The temple is the largest Buddhist monument in Europe.

The Golden Temple with its white, red and gold building was blessed in 2004 by the Dalai Lama. It houses a colossal statue of Shakyamuni Buddha and stands on an embankment near the centre of Elista, surrounded by Tibetan prayer flags made of coloured cloth that are always lashed by the strong wind blowing over the area.

Kalmyks who profess Lamaist Buddhism (48% of the total population) coexist peacefully with followers of Orthodox Christianity (18%) and Muslims (5%). There are Orthodox churches, a mosque and a synagogue in Elista. In addition to the Golden Temple, many other signs testify to the presence of Tibetan Buddhism in the nation. The white lotus flower, a symbol of purity and perfection in Buddhism, is featured on the official flag of the Republic and in the monumental fountain in the central Lenin Square. Outside the capital, a landscape dotted with white stupas is clearly visible over the flat and monotonous local steppe. In villages, even remote ones, it is also not difficult to find stupas, statues of the Buddha, small pagoda-shaped temples and prayer wheels.

The boundary of the P221 provincial road between the Republic of Kalmykia and Volgograd Oblast in the Volga region of Russia is a territory undergoing desertification.

Despite a renewal of Buddhism in the nation, the Republic is one of the driest anthropised region in Europe. At the end of the 1950s, its territory was included by the Kremlin in a planning programme that intensively exploited pastures in the less industrialised areas of the Soviet Union. The region's scarcity of resources combined with the excessive productivity demand of the Communist Party led to the drying out of the area, which triggered an unstoppable process of soil erosion that led to partial or total desertification.

"Buddhism has taught us that nature and human life are interconnected and that the desertification of the environment corresponds to the desertification of the inner life. The current situation of our Republic derives from the miseries of the past, but our spiritual richness helps us every day to counteract the difficult environmental conditions and improve the place where we live," expressed Hongor, who runs a tiny tourist agency in Adyk.

Amidst the daily struggle for survival in an ecosystem that is harsh and complicated, it is the Kalmyk people who do not give up and remain firm in their Buddhist faith. In their resilience, there is intense spiritual strength that leads them to chart new paths for the future. They may not be always optimistic, but they always show the determination in their search for harmony with nature.

The aerial view outside Volgograd, previously known as Stalingrad, shows the process of soil degradation and desertification.