As Ukraine continues to struggle in armed conflict, one of the most pressing issues for the country is helping war veterans reintegrate into society, find inner peace again, and return to a normal life. 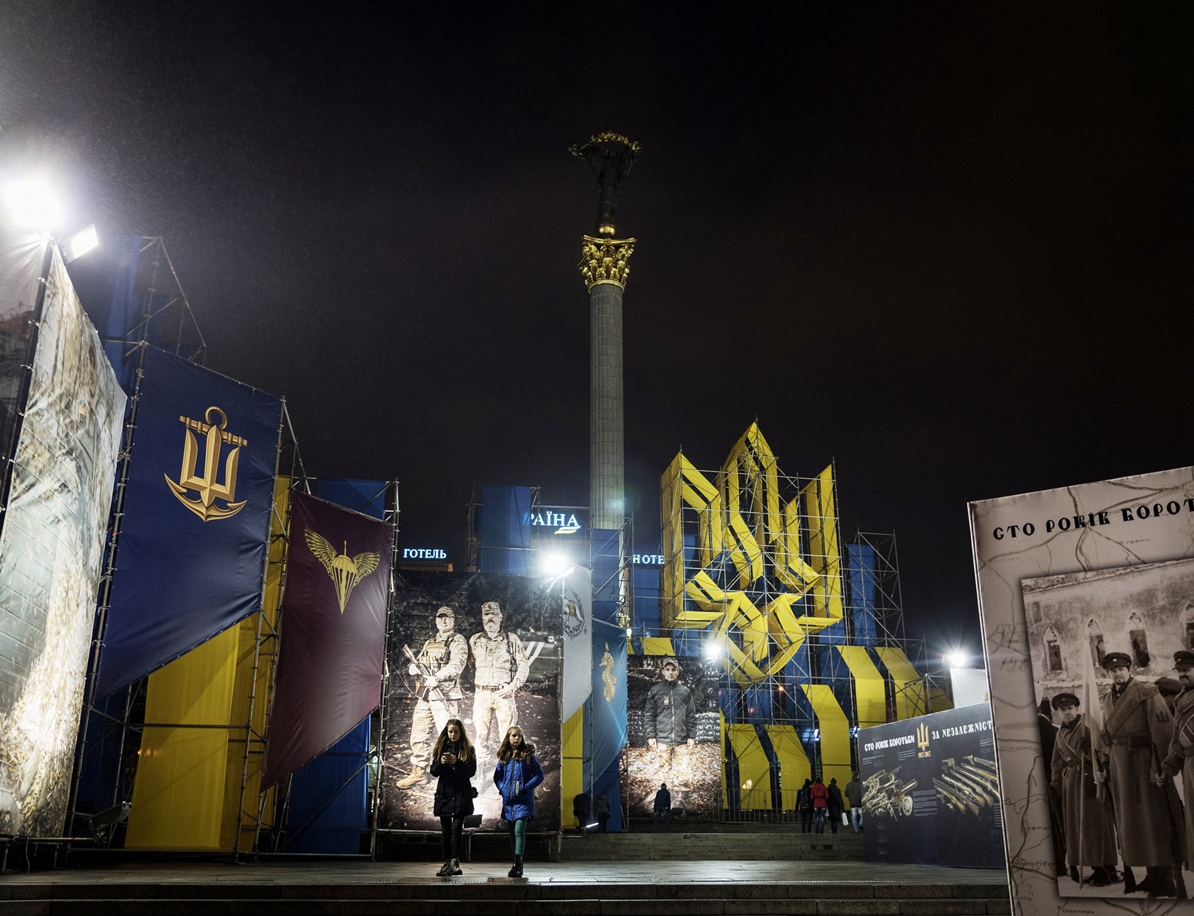 A symbol of Ukraine, the main square in the capital of Kiev is the venue for celebrating a century of war against the Russian occupation.

After the success of the Maidan revolution in 2014 triggered armed conflict between pro-Russian forces and the Ukrainian government, for the first time since its independence in 1991, Ukraine found itself facing the worst of all evils: war. From the summer of 2014 until February 2015, the conflict was at its most intense. Thousands of people of all ages, men and women, left for the frontline to defend their homeland from the Russian advance. In this period of chaos, battles were fought that left a physical and psychological mark on the country.

The terrible defeat at Ilovaisk, the battle for control of Donetsk airport and finally the battle for the Debaltseve railway junction are probably the most notorious within and outside Ukraine for the number of deaths and the cruelty of the fighting. The extensive use of Grad missile systems has contributed to the destruction of entire neighbourhoods, forcing civilians and soldiers to live underground for long periods of time, protected from explosions. As consequence, post-traumatic stress disorder (PTSD), a mental condition triggered by a major traumatic event, has spread like wildfire across Ukraine and crept into the homes of thousands of Ukrainians.

Without any previous reference of psychological treatment for veterans in the country and the inability of institutions to deal with the problem, the heavy burden of reintegrating thousands of soldiers into society has fallen on the shoulders of non-governmental organisations. Probratimi, developed during the years of conflict, has been making a difference in assisting veterans. Founded by Artem Denysov, a psychologist determined to do his part at such a delicate time in the country's history, the organisation has adopted the innovative Danish therapy system called Bodynamic. The method, which is based on "somatic developmental psychology," has been very successful not only in treating PTSD but also in the later stages, when veterans are asked to identify their personal goals. The aim is to encourage sociability and reflection, stimulate the senses and understanding of oneself and others. A fundamental aspect is to provide veterans with the right tools to help other veterans, making use of the trust between those who have shared the same experiences. 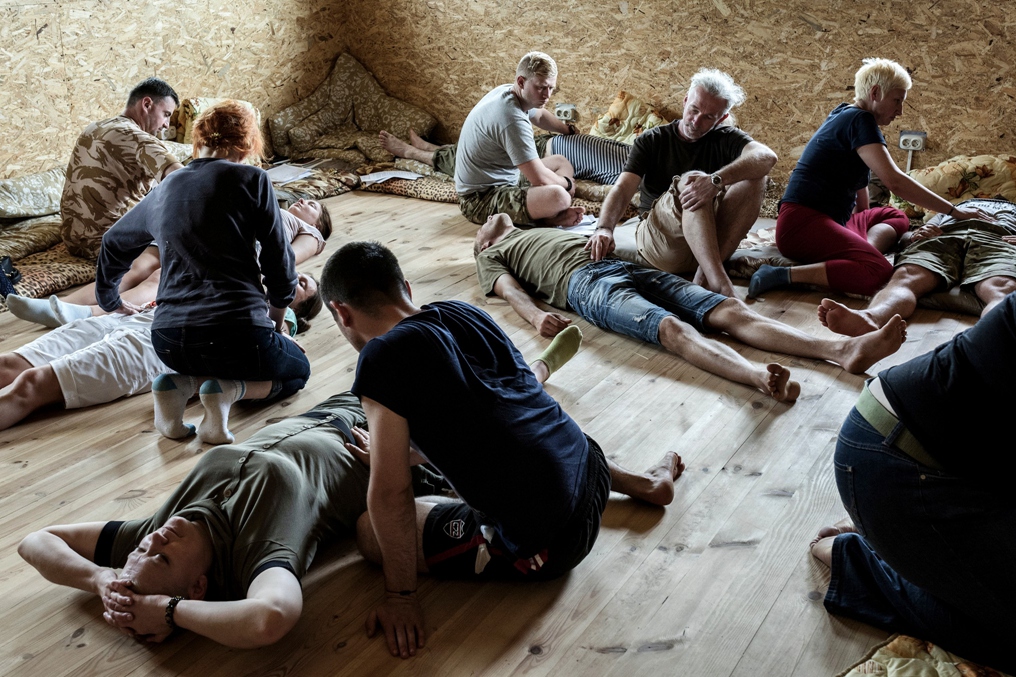 Probratimi organizes courses to teach veterans help one another through the Bodynamic approach.

For returning soldiers, one of the most frequent problems is the feeling of inadequacy in the new context and environment, which poses one of the main obstacles in their path back to a normal life. And for those who have returned from the front with serious disabilities, their issue is much more complex to overcome. In many cases, the most effective medicine to combat the trauma of physical disability is sport. Hence, the great success of the Invictus Games in Ukraine. Created in 2014, thanks to an idea of Prince Henry, the Invictus Games are a multi-disciplinary sporting event designed specifically for war veterans who have suffered permanent disabilities in service. In Toronto, in 2017, Ukraine participated in its first edition of the games and came home with 14 medals.

Vadym Sviridenko is one of the athletes in the Invictus Games that has won eight gold medals. Wounded in the battle of Debaltseve, Vadym was captured after spending four days lying in the snow. Returning to the ranks of his comrades after a prisoner exchange, he suffered the amputation of all four limbs due to frostbite. With his extraordinary strength of mind, Vadym achieved results that would otherwise have been unthinkable. His terrible physical condition has not prevented him from attending all kinds of events and travelling the world to take part in sporting competitions such as the Washington Marathon or the Invictus Games. 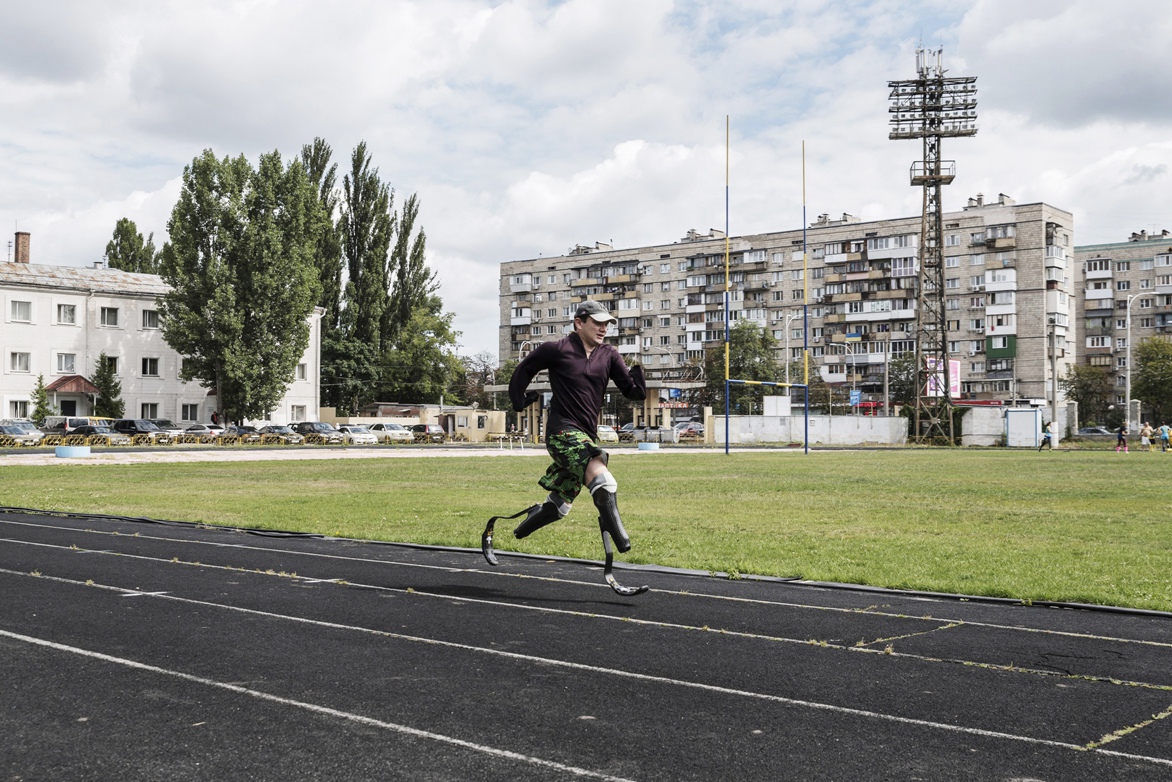 Vadym Sviridenko at a training session for the Invictus Games, in which all athletes are servicemen or veterans who have been seriously injured.

To better understand the magnitude of the plight of veterans in Ukraine, it is necessary to resort to some figures. The number of veterans is estimated to be somewhere between 400,000 to 450,000. The main problem for the difference concerns those who have fought in voluntary battalions without joining the regular army and, more generally, all those who have been in the war without a legally recognised position. The number of women who have served in the combat zone is even harder and more complicated to count, as this issue is closely related to the patriarchal culture prevailing in Ukrainian society. Although women were at the front taking an active part in the fighting, they were officially registered as cooks, seamstresses or orderlies since Ukrainian law did not allow women to hold other positions. In 2018, however, thanks to Invisible Battalion campaign led by drone pilot, LGBT activist and film producer Maria Berlinska, the law changed, effectively regularising the presence of women in the army.

As Ukraine struggles with the ongoing war, it will also have to face one of the most pressing issues in the country: the healing of veterans from their physical and psychological scars and their path back to a normal life. 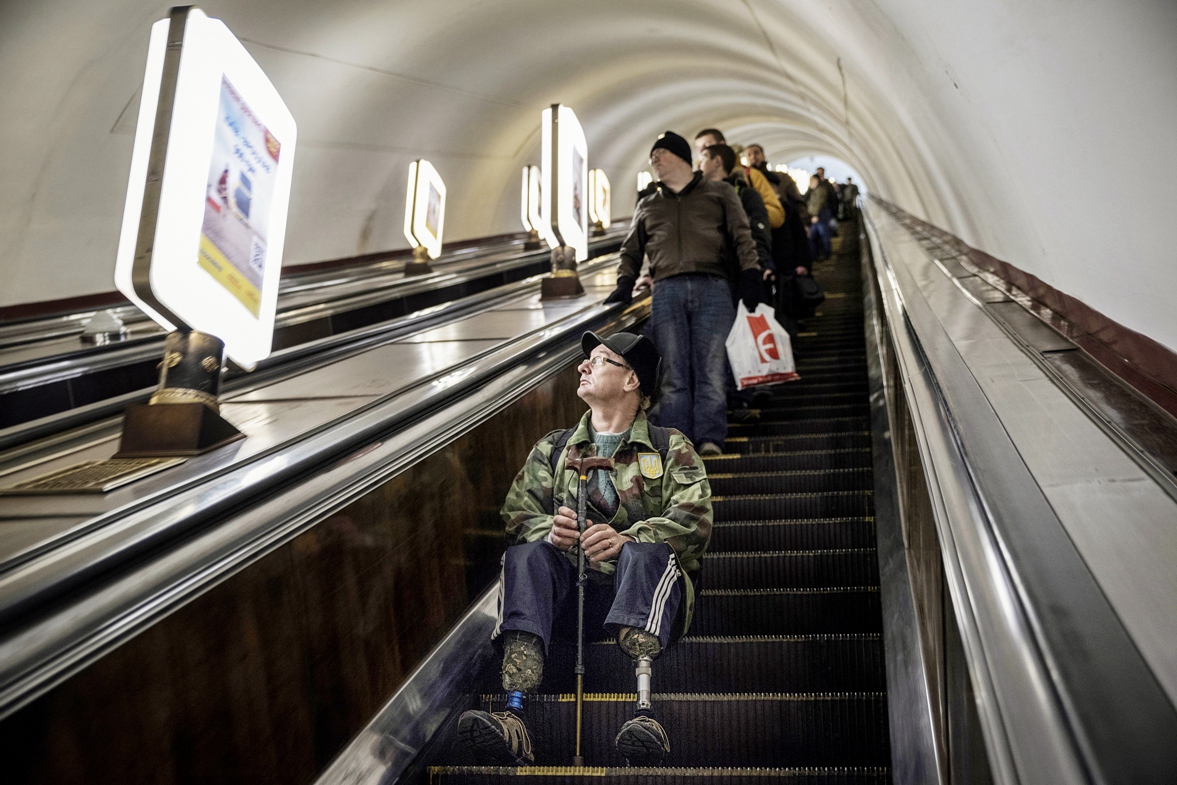 Tolik heads home after a demonstration for disabled rights.