A Sad Future for Elephants?

A Sad Future for Elephants?

Hwange National Park, a natural reserve in Zimbabwe, has been so successful in their conservation of elephants that the growing population is putting a strain on the park's natural resources. With a shortage of food and water, where can these elephants go?

The population of elephants in Hwange National Park has grown beyond the capacity of this natural reserve, leading to a shortage of water and food.

"We saved the elephants of Hwange National Park but we have a problem, now they're too many", says Mark Butcher ('Butch' for friends), a former ranger with the Zimbabwe Parks & Wildlife Authority, who later became head of Matabeleland Forestry, and finally an eco-lodge creator and promoter of responsible tourism, always at the forefront of wildlife conservation.

There are no rivers in the park and during the dry season the pools of water filled by the rains dry up inexorably. In the past, thirsty elephants migrated to the Zambezi basin in search of water, but now, with the increase in population, the migratory corridors have been occupied by villages and crops. In order to keep the pachyderms inside the park all year round, the Zimbabwe Parks & Wildlife Authority started digging a series of wells a few decades ago to pump water into the parched ponds.

Today, due to the chronic lack of funding from government agencies, private individuals like himself are carrying out this programme. The project has been a huge success and the presence of elephants in Hwange has quadrupled in a few decades, reaching the impressive number of 44,000, 10% of the total remaining in Africa. But now a problem has arisen: the number of elephants is far too high for the park's vegetation, which is largely devastated. Anyone wandering around the park today is shocked to see mopane trees in some areas practically eaten down to their roots.

Encouraged by this surplus of elephants, Zimbabwe has not been too shy this year about selling the rights to hunt up to 500 elephants in order to generate government revenue. "Revenue from elephant hunting will be particularly important for the country because of the economic setback caused by the Covid-19 pandemic," said Tinashe Farawo, spokesperson for the Zimbabwe Parks and Wildlife Management Authority. The sale of licences to hunt elephants is nothing new and it was in this park in the country's deep south that a few years ago a photo of a tourist/hunter who paid 60,000 euros to shoot and be proudly portrayed in front of a giant, dying elephant, went viral, shocking all wildlife conservation groups. For Mark, the selective culling of elephants in order to reduce their excess numbers is certainly not a solution, given the exponential increase in poaching throughout Africa, which is now practised on a large scale by criminal gangs equipped with automatic weapons. 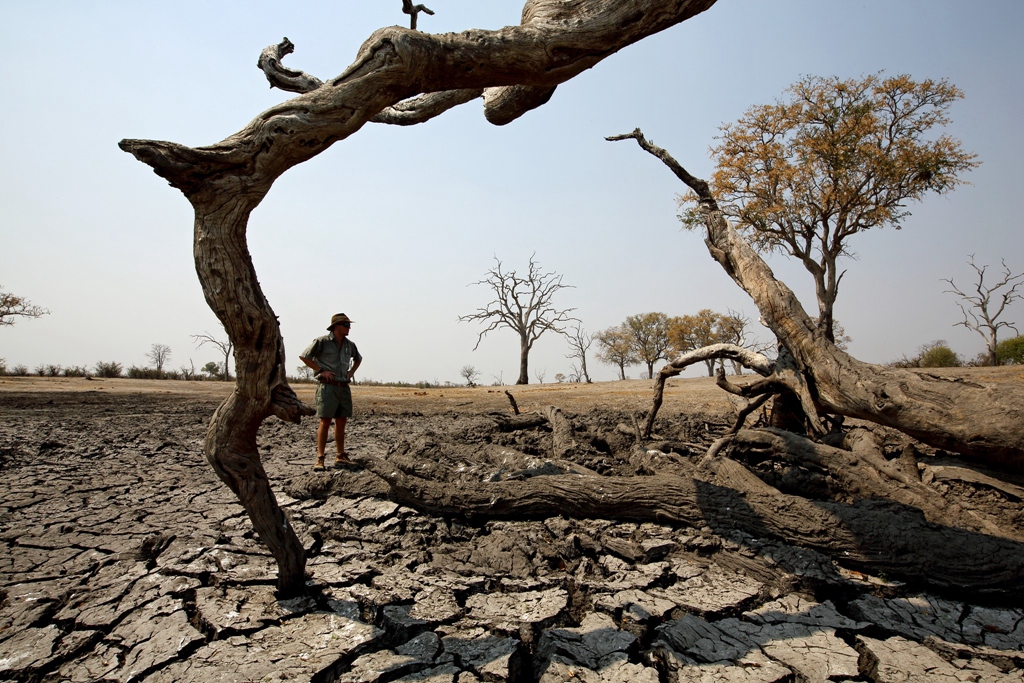 There are no rivers in Hwange National Park so the only water sources are the pools of water filled by rains. During the dry season, the pools dry up inexorably.

Villages close to the park pay the price of living with the animals, as Johnson Ncube, community leader of the Ngamo area, south of Hwange, confirms, "In my area, which has about two thousand people, we are subsistence farmers; we grow maize, sorghum, millet, but mostly we raise cattle because the soil is sandy. The lions and elephants that come out of the park damage the crops and raid the cattle." To give a positive spin-off to the local community, in the spirit of the wider 'Campfire project', which was set up in Zimbabwe in the 1980s to reconcile the parks with the villages that had hitherto been excluded from enjoying the protected natural resources. "Now my people take care of the wildlife because they realise that, in return, they get water, sanitation, schools and employment, and soon a clinic, through tourism," Ncube says.

Butch – who also subscribes to the policy of sustainable use of wildlife – is betting on the growing role of photographic safari operators located in the buffer zones around the parks, so that their presence can replace the economic contribution brought to the villages by big game hunting. "The European Union legally imports trophy tusks from Zimbabwe, South Africa, Namibia and Tanzania," he recalls. "Hunting has been an important resource for depressed areas, both in economic terms – through the sale of licences – and in terms of protein intake. But it is time for ecotourism to provide an increasingly viable alternative, so that this 'sporting' practice remains confined to just a few private farms." Or disappear altogether.

Meanwhile, the parks department does not have the means to quench the enormous pachyderm population and Butch is seriously concerned about the future of the elephants and the entire Hwange ecosystem. "Letting the elephants, and with them many other animals, dehydrate is not an ethically acceptable solution. At the same time it is impossible to opt for contraception – it only works in zoos and small parks – or to relocate pachyderms. Moving a six-tonne animal costs about $20,000, and there are no free areas that can accommodate thousands of wild elephants. It would only be tantamount to shifting the problem. We hope for the expansion of the range, the area suitable to support the species, and the return of wildlife corridors with the development of the Kavango-Zambezi Transfrontier Conservation Area, a protected area straddling Botswana and Zimbabwe: it is our dream. This is our dream, although we are concerned that the elephants, who have been used to staying within the park for generations, will no longer be able to recognise the ancient migration routes."

In the sunset, elephants and hippopotamuses are drinking water from a pond.