Once an oasis of stability in the perennially crisis-ridden Horn of Africa, a grueling civil war is pushing Ethiopia into a humanitarian disaster of famine, suffering, and the loss of countless of lives. 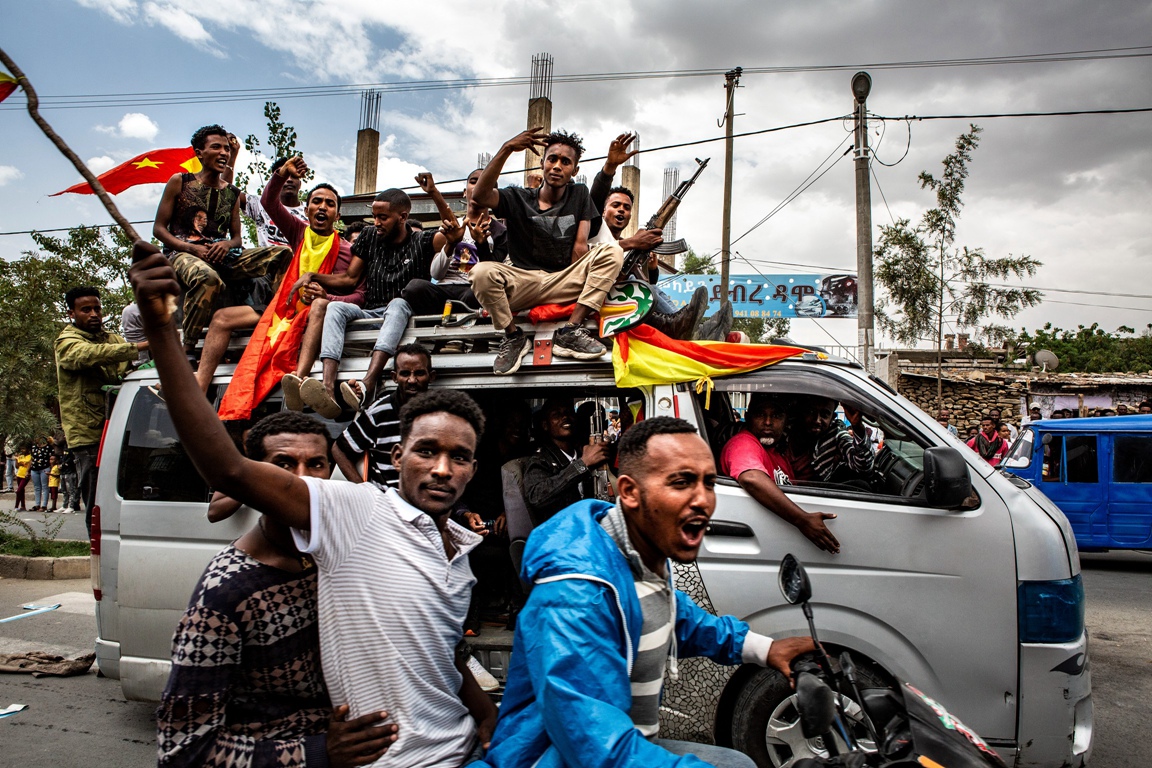 On 29 June, people of Mekelle cheering after the Ethiopian army fled the city the night before.

Abiy Ahmed, Ethiopia's prime minister since 2018, first acclaimed for ending the 20-year conflict with neighboring Eritrea (this is why he was conferred the Nobel Prize in 2019), now accused of sparking a new internal war against rebels in the northern region of Tigray. For Ethiopia, the region of some six million people has always been a thorn in the flesh: before 2018, the Tigray People's Liberation Front (TPLF) had held power in the capital Addis Ababa for 26 years. Although they are only seven per cent of the total population, Tigrayans occupied many key positions in politics, in economy and in the army. Then Ahmed, who is an Oromo, the largest ethnic group in the country, ousted the TPLF from the levers of power.

Tigray was scheduled to hold local elections in 2020, but Ahmed used the Covid pandemic as an excuse to postpone them. However, in September 2020, the TPLF organised the vote, which resulted in a landslide victory for the separatist party. Two months later, Tigray militiamen stormed a national army base in Mekelle, the capital of Tigray. In reaction, the Prime Minister sent the army for 'punitive action', at one point in the conflict also using troops provided by Eritrea. In the ruthless war that has been shaking the region since then, hunger, unjustified violence against civilians and systematic rape have also been used as weapons. Accusations of war crimes are addressed to all warring parties. The infrastructure of the region has been almost completely destroyed. Medical assistance is almost non-existent. Some have been demanding that Ahmed be stripped of his Nobel Prize. 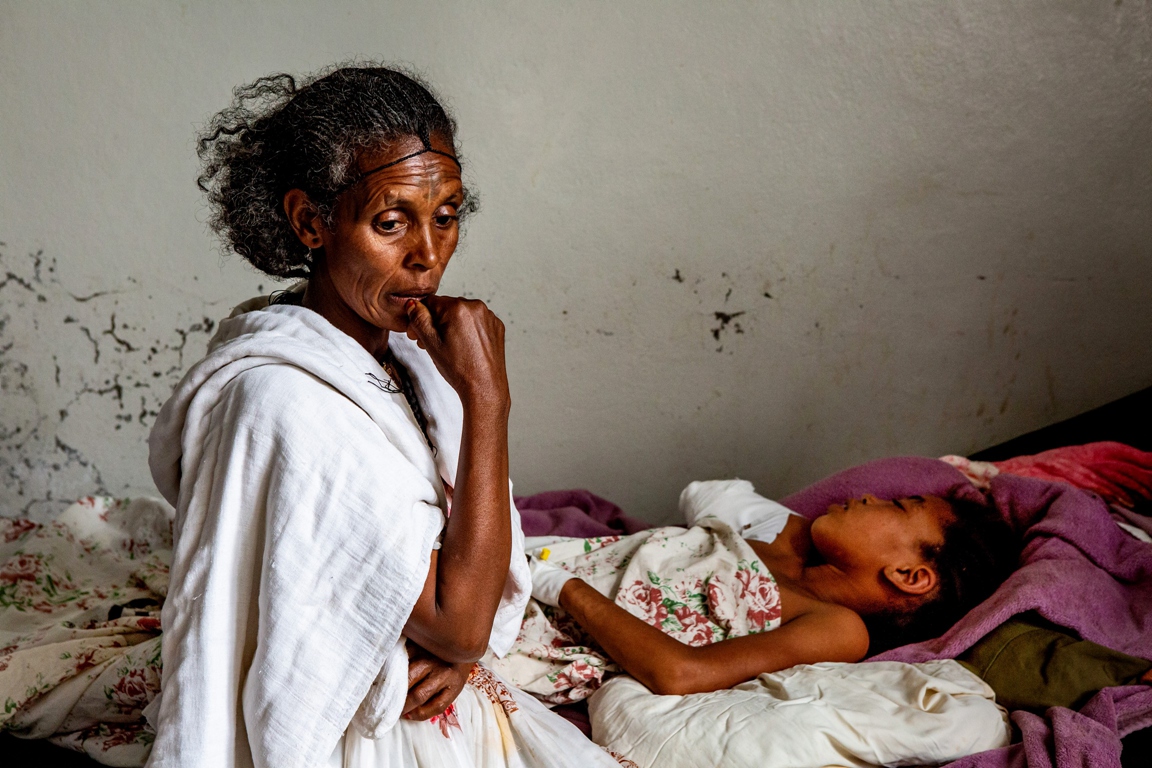 As the access road was blocked by the Ethiopian army, 12-year-old Genet was sent to the hospital too late and her arm had to be amputated after an air strike.

Ayder hospital, in the city centre, is the only remaining hospital in Tigray. In a corner of the intensive care unit, Tsigabu Gebreterisae, a 45-year-old woman who looks 15 years older, is sitting next to a bed where her 12-year-old daughter Genet is sedated by morphine. For a few days Genet has had no right arm. "What should I do?" says the woman. "My daughter is injured. My son is dead. My village is destroyed and I don't know where to go. But I cannot kill myself. After all, I have six other children." Five days have passed since an ambulance convoy managed to take 26 injured people to Ayder hospital. Among them was Genet, whose arm had been blown off by shrapnel from a bomb. Doctors had no choice but to amputate it.

Just like its hospital, Ethiopia's former model state is now on the verge of collapse. In recent years, the country has experienced one of the fastest economic expansions in the world. Although not a model of democracy, for some time multi-ethnic Ethiopia represented an oasis of stability in the perennially crisis-ridden Horn of Africa region. But since Prime Minister Ahmed came to power and tried hard to curb the influence of the Tigrinya elites, Ethiopian history has been repeating itself with yet another chapter in its long and tragic trail of inter-ethnic conflict. Jeffrey Feltman, US Special Envoy for the Horn of Africa, recently warned: 'Ethiopia has 110 million inhabitants. If tensions develop into widespread civil war, what happened in Syria will seem like child's play by comparison'. 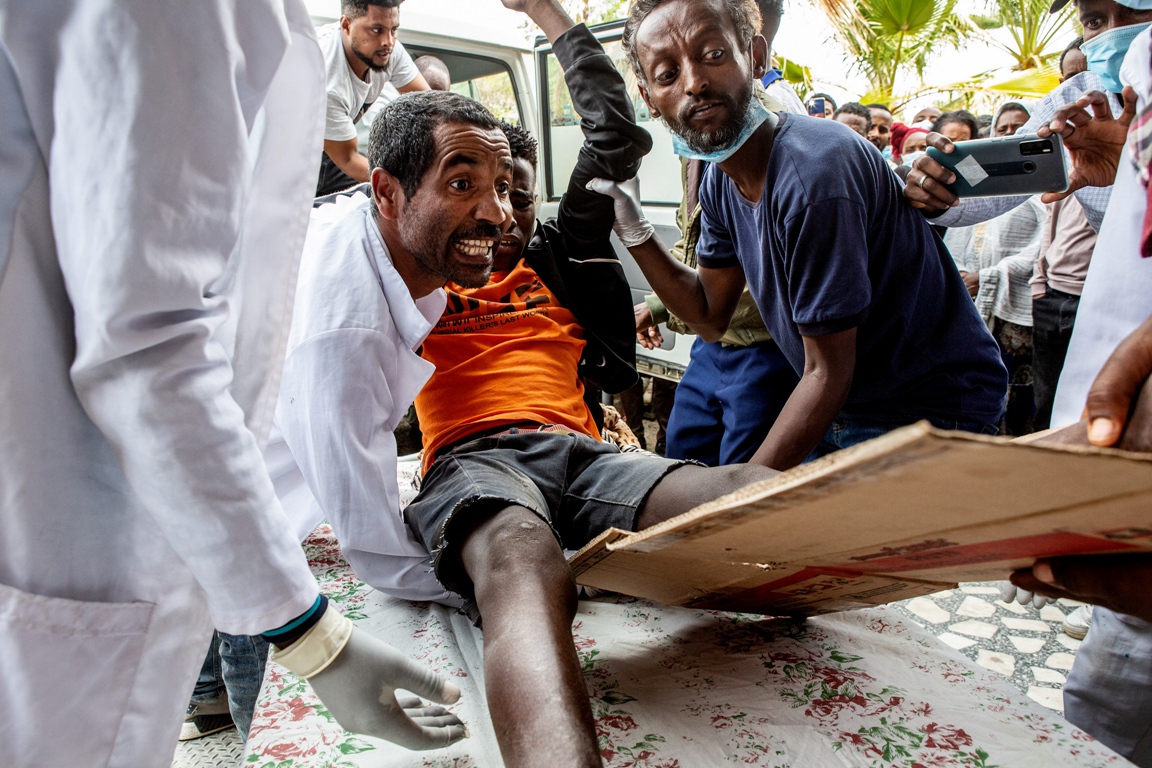 On 22 June, the Ethiopian air force attacked the village of Togogwa, killing 64 and injuring more than 200 people.

Indeed, the humanitarian situation in Tigray has been worsening dramatically in recent months. Anti-TDF coalition troops have systematically cut off access to food for the population, destroying crops and threatening farmers with death if they attempt to cultivate their fields. Hunger was used as a weapon, and targeted the most vulnerable: between March and May 2021, the rate of malnourished children in villages accessed by humanitarian agencies rose from 30 to 50 per cent. According to USAID, the US government's aid agency, 350,000 people in Tigray were at risk of starvation at the end of June. Estimates now speak of nearly one million. But humanitarian corridors to allow agencies to bring food have not been opened. Indeed, in some cases, convoys attempting to reach Mekelle through the neighbouring Amhara region, hostile to Tigray, were attacked.

Rape has also been used as a weapon in a totally indiscriminate way. In the Ayder hospital complex, the 'One Stop Centre' is a clinic where nurses and psychologists take care of 'survivors', as they call their patients. Hagush Gebremedhin, 50, is one of the most experienced nurses. "In the past, the victims of rape were mainly teenagers and younger women. This time it is different," she says. Since the beginning of the last conflict, the nurse reports having assisted hundreds of raped women. At least 120 of them were minors. The oldest patient was 70 years old, the youngest four. A colleague had to take care of a three-month-old baby girl. The rapes often took place in front of relatives, husbands or parents, who were forced to watch and sometimes killed immediately afterwards. "I have never seen anything like this," says Gebremedhin.

Not long after the Tigrinya militias took Mekelle, Prime Minister Ahmed hastened to declare a unilateral 'humanitarian ceasefire'. The opinion of many observers is that he did this to save his reputation after the disastrous flight of his army. But what many people think is that the prime minister feared that, on the wave of enthusiasm for the recapture of the Tigrinya capital, the TPLF would decide to advance eastwards, towards the Amhara and even further south, to Addis Ababa. And unfortunately, judging by the way the fighting front is shifting eastwards with the involvement of Gibutine militias, this time by the TPLF itself, this is what seems likely to happen in the coming months. With the gloomy prophecy of US correspondent Feltman ever closer to coming true. 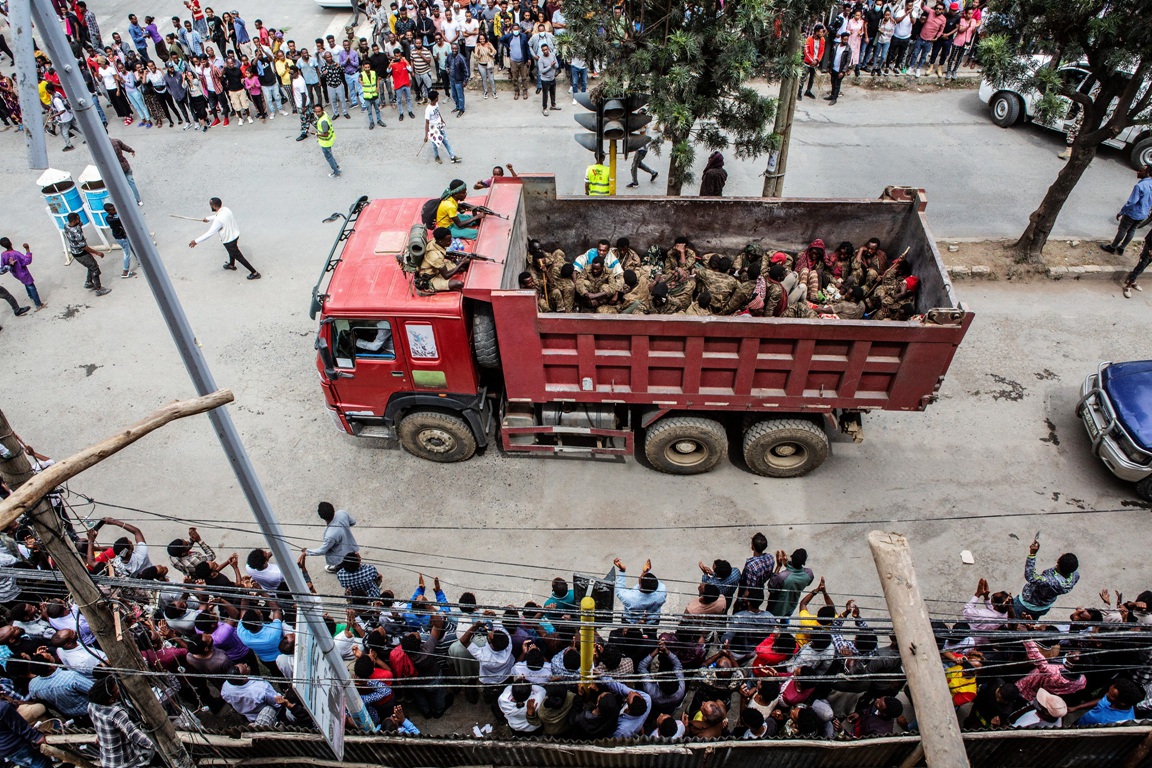 After the armed conflict in Mekelle was over, about six thousand Ethiopian prisoners of war were captured.