Covered in smoke, smog and particulates, Delhi is one of the most polluted cities in the world. For those who are well off, they can buy masks, air purifiers, and even oxygen for a temporary relief. But for many others, a breath of fresh air is a luxury they cannot afford. 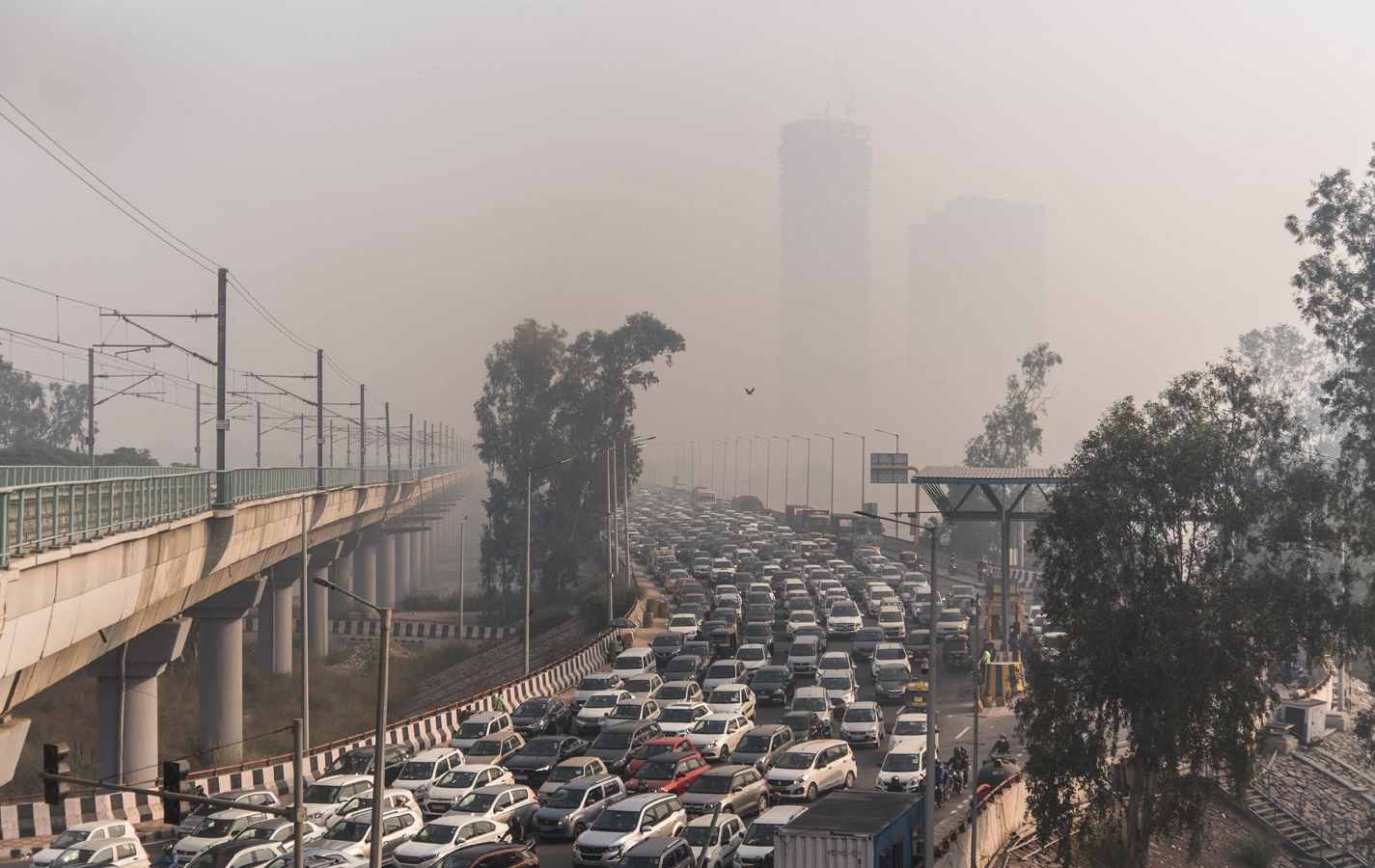 A jam-packed New Yamuna Bridge in the morning rush hours.

Early in the afternoon, Daljeet arrives at Citywalk in Delhi with her mother. The youngster often walks around the exclusive shopping centre, but today she's not looking for designer clothes, beauty creams or exquisite cakes to go with her tea. Today this young lady has come to buy oxygen. "Please, make yourself comfortable and put the cannulas in your nose" is how Ajay begins, the owner of Oxy Pure, the first bar to offer people the chance to breathe clean air, and which opened in the Indian capital in May 2019. A 15-minute session costs between 300 and 500 rupees, depending on the aroma (Daljeet chooses cinnamon, her mother eucalyptus), and demand is so high that the owner, entrepreneur Aryavir Kumar, is planning to open a second bar at Indira Gandhi airport.

The success of Oxy Pure is linked with some alarming data: Delhi is the most polluted city in the world. A "gas chamber" of 25 million people where – particularly in winter – smoke, smog and particulates create a toxic cloak that's impossible to escape from. More specifically, in the period from 2018 to 2020, the Indian capital only met the standards set by the World Health Organization (WHO) on seven days. What are these standards? The WHO recommends that the PM 2.5 concentration level shouldn't exceed 25 μg/m³ (24-hour mean), and if the level exceeds 80, a red alert is triggered: well, the average recorded level in Delhi is 300 μg/m³, and on certain days it reaches 400, 600, sometimes even 800. 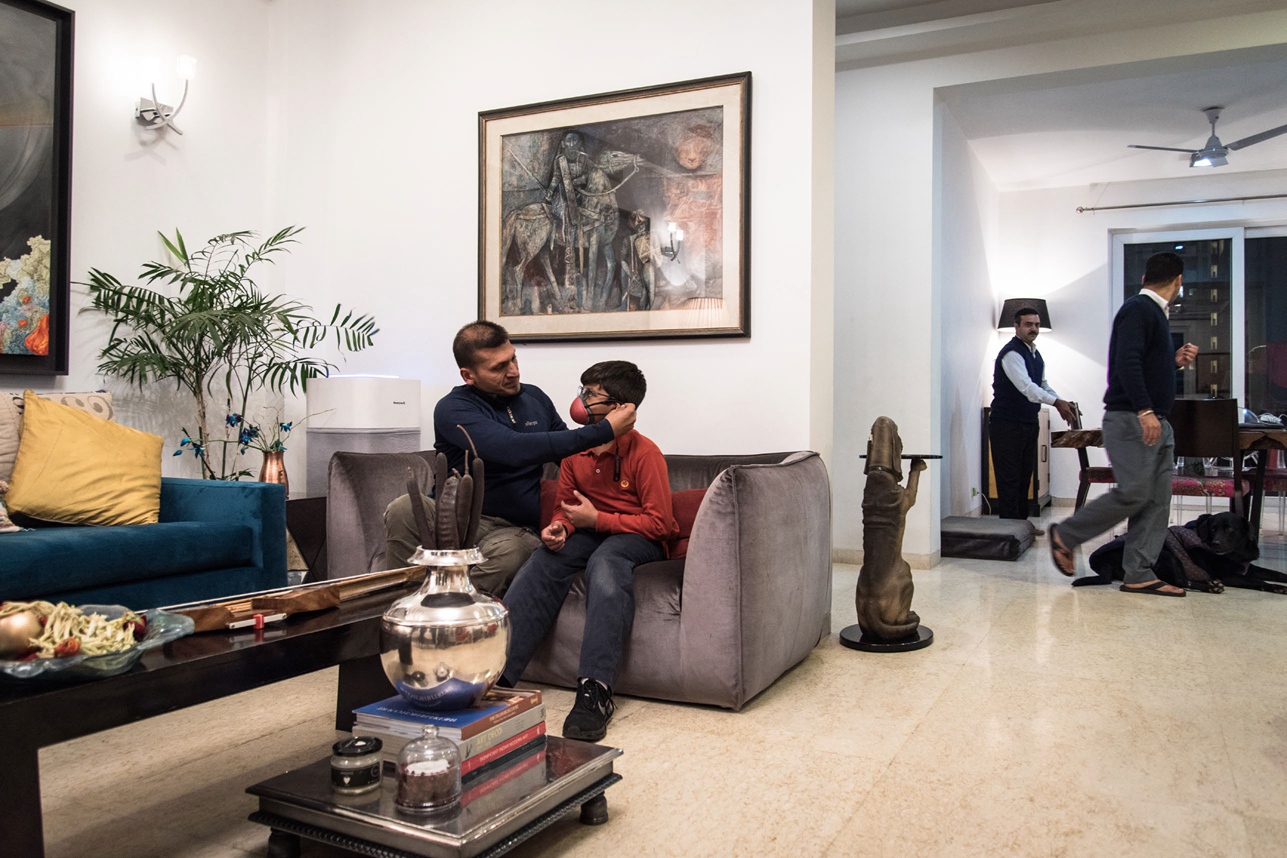 Jai Dhar Gupta helping his son put on a mask that his company produced.

For a long time doctors have argued that breathing the Delhi air is the equivalent of smoking two packets of cigarettes a day, and the consequences are devastating: it is estimated that in this megacity 30,000 people die prematurely each year as a result of the smog. A real "airpocalypse", as the newspapers have called it. And in these early months of 2021, the authorities are loath to order new traffic restrictions to alleviate the pollution, because they don't want to slow down the economic recovery following the turmoil of 2020. The capital's politicians – not knowing what else to do – have invented a mobile app that enables citizens to send photos and report anyone causing pollution, but the real question is: where does all this pollution come from?

The sun has just risen from beyond the Yamuna, the river that runs through Delhi. At dawn the fog envelops everything and it's only Tanvee's voice that pierces the muffled silence: "what you see over there – the girl explains – is one of the world's most polluted waterways." Tanvee Kakati, a program manager for Swechha, an association that aims to raise the awareness of younger generations about respecting the environment, organises walks along the Yamuna to teach primary and lower-secondary school children about the disasters the pollution is causing. "The city of Delhi discharges hundreds of millions of litres of sewage into the river every day, yet 70 percent of Delhi's drinking water comes from here." Tanvee tells the children about the damage that poor environmental management can cause to people and she explains that the fog surrounding them isn't natural at all: it is, in reality, smog. The pollution comes from a variety of sources: emissions from factories on the outskirts of the city, dust from construction and demolition sites, the exhaust fumes from millions of vehicles (both public and private) and the fires lit by hundreds of thousands of poor people (300 million throughout India) who, every day, have to burn whatever they can for heat and to cook: wood, plastic, rubber or whatever they can get their hands on. 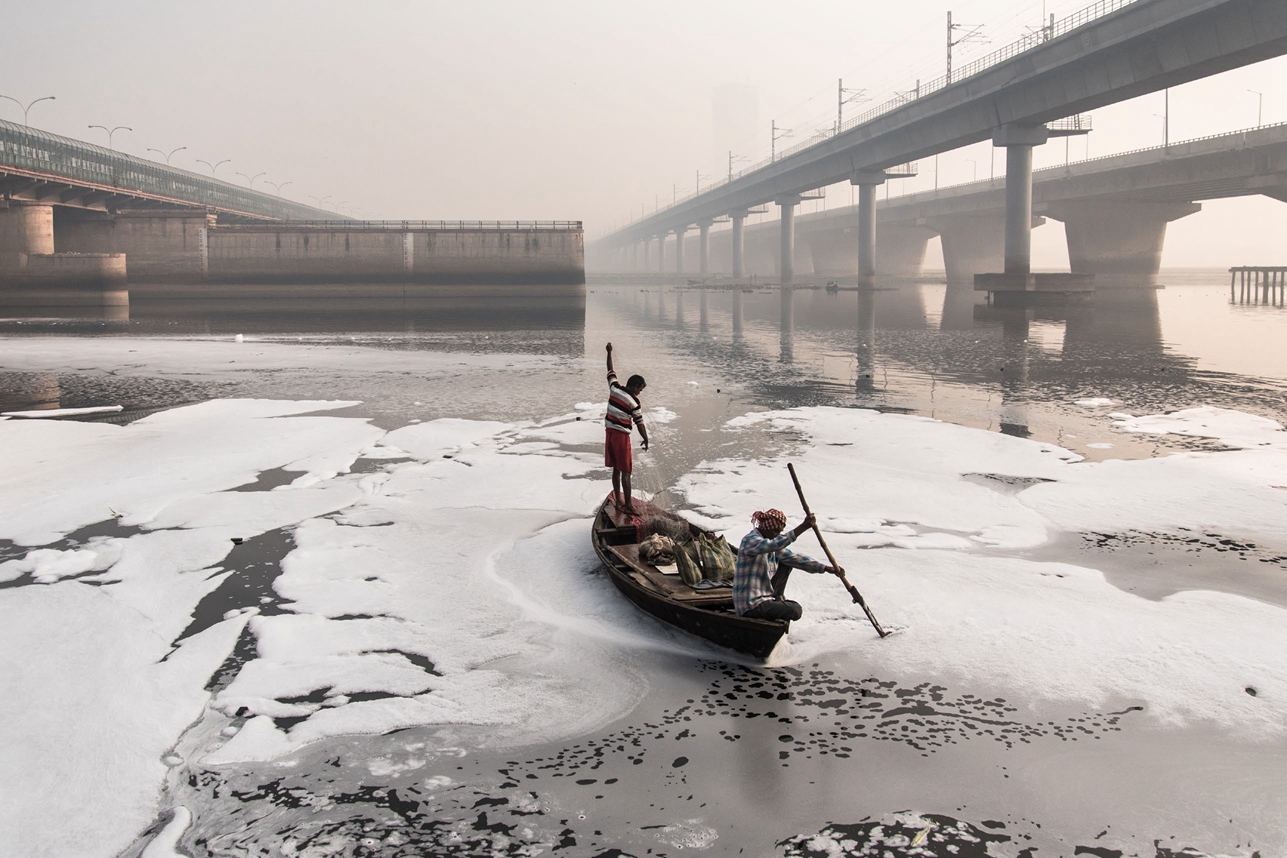 Every day, an immeasurable amount of waste gets dumped into the Yamuna River.

Despite being home to just over 18 percent of the world's population, three years ago India accounted for more than 26 percent of deaths and disability attributable to air pollution worldwide, in other words 1.24 million deaths. The most at risk are the poor: labourers, rickshaw drivers and street vendors who spend most of their time out in the open, without adequate protection. Those who can, buy themselves an air purifier, like those sold by Dhariyash Rathod, CEO of Smart Air India, a company headquartered in China: their products cost from 8,000 to 40,000 rupees (from approximately € 100 to € 500) and in four years they've sold just over 10,000 units. Others, like interior designer Mrignaina Kumar, mitigate the pollution by filling their houses full of plants or by spending their weekends in one of the city's green lungs, like the exclusive Delhi Golf Club where the rich play golf with masks on.

"Along with air purifiers, using face masks is the only serious tool we have for combating the pollution. But beware, there are masks and then there are masks" explains the entrepreneur Jai Dhar Gupta as he sits in his house in Palm Spring, a residential complex to the south of the city. An outdoor sports enthusiast, in 2015 Jai became aware that he was suffering with severe lung problems and he decided to dedicate his life to fighting the pollution. He founded Nirvana Being, a company through which he produces and sells high quality purifiers and face masks, and he's launched a Facebook page called AirMergency. Starting a campaign which, in his words, feels like tilting at windmills. "For Indian politicians, the environment is not a priority – claims Jai – and many of them even deny that there's a cause and effect link between pollution and illness. All they're capable of doing is closing schools, advising against outdoor activities or recommending people gargle with warm water if they have a sore throat. Nowhere near enough, right?" 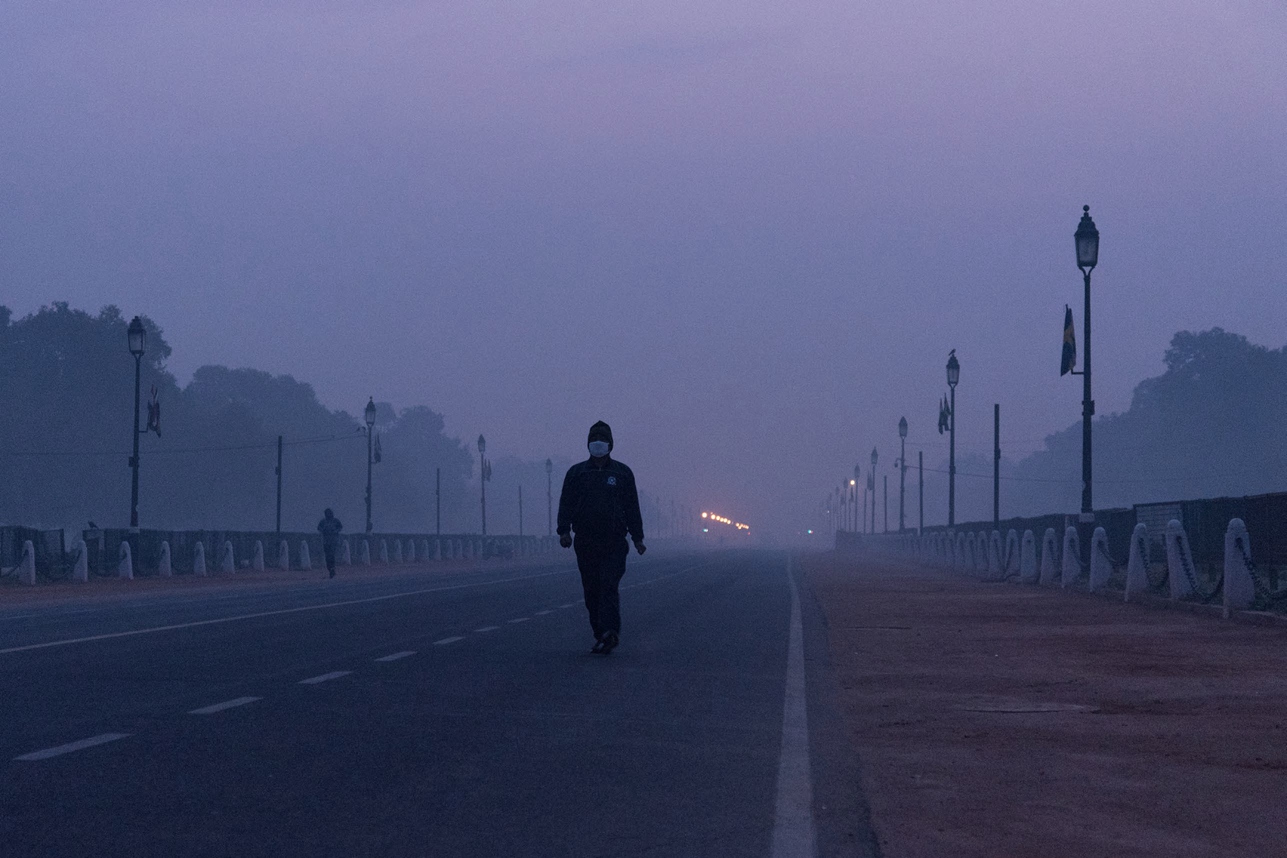 On the Rajpath, a man wears a mask to his morning jog.