The Long Road to School

The Long Road to School

In the remote region of Zanskar in Northern India, the teachers of Lamdon Model High School must battle harsh weather conditions and cross treacherous mountain paths just to reach their school. However, they know they are bringing hopes to those living under the Himalayas. 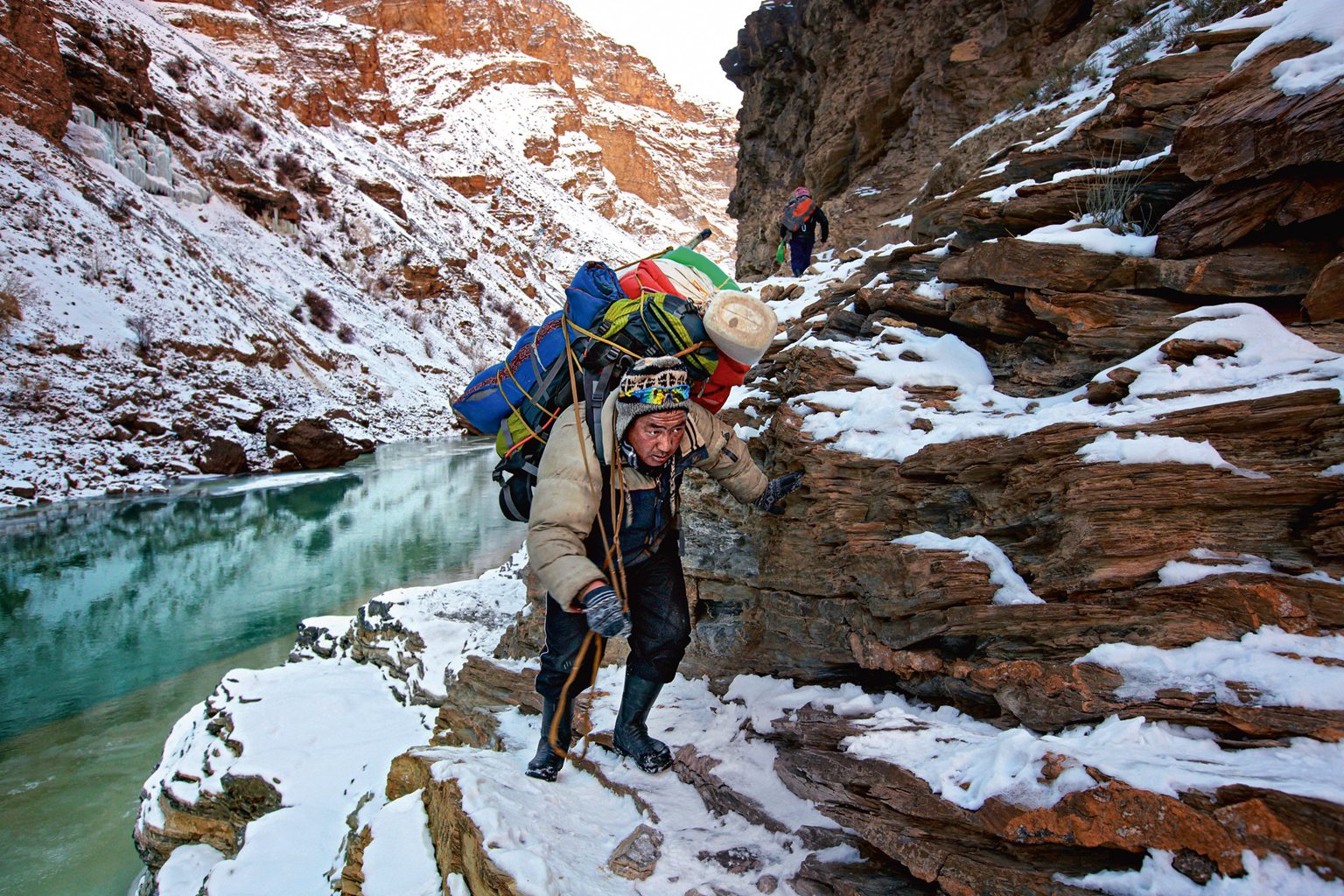 When the temperature is not low enough for the river to freeze over, travelers must climb the treacherous rocks on the side or risk getting stranded in the valley.

We walk in the shadows, squeezed between gorges where the sun cannot penetrate even at noon. Sometimes the icy surface of the river is smooth as a mirror, showing phantasmagoric designs and requiring good balancing skills. At other times, the upper layers of the ice melt, leaving on the surface a film of icy water in which to dive with boots or barefoot, if the former are not sufficiently waterproof. In some places the river seems to dissolve completely under a blanket of fresh snow, and the journey becomes apparently easier. But it is only an illusion, after passing a curve, the waters recur strongly and the ice becomes thinner and thinner, forcing us to take a new step, clinging to the overhanging rocks.

For a couple of days, my adventure began in the company of some teachers from the Lamdon Model High School in Padum on the Chadar, the valley crossed by the Zanskar river. Zanskar is a remote region of northern India nestled between the Great Himalayan Range and the Karakorum, halfway between Kashmir and the ancient Tibetan kingdom of Ladakh (the country of high passes). Independent kingdom until 1842, it was subsequently annexed to India which tried, without much success, to impose on it language and culture. Within this high-altitude desert, few oases alternate with Lamaist monasteries similar to miniature fortresses, which overlook the river of the same name.

In this place unchanged over time, at the end of January, the temperatures collapse beyond -30 ° under the gusts of the Himalayan winds. The waters of the river, impetuous throughout the year, begin to slow down the pace until they are completely imprisoned in their bed. It is the moment, in some respects magical, in which the Zanskar, which winds northwards to the confluence with the Indus, turns into a river of ice.

This important atmospheric event offers the inhabitants of the valley, isolated from the end of October, when the snow makes the paths impassable and the only carriage road, a new possibility of contact with the rest of the world: walking on ice.

The appointment with some of them is in Leh on February 20th. Obviously everyone tries to return to school only a few days before the start of classes. For this reason Targay, the zanskarpa guide (inhabitant of Zanskar) who will accompany me along the way, seems slightly worried. In recent years, the global warming of the planet is starting to show its effects even in the icy Himalayan valleys. This year in particular the temperatures have never dropped below -30 °, and the second half of February presents itself at high risk, with the ice that at various points could have completely melted, or be too thin to support the weight of men and sleds.

On this first day of walking, the very temperatures that do not want to go too low to zero degrees forced us to take some challenging rock climbs with the help of ropes that slowed the march. But during the night, the full moon and the myriad of stars so bright as to make the use of torches useless, they tightened the river in a cold grip and I wake up with the frozen sleeping bag next to Targay happy before facing the day more challenging than the entire route. The one in which the rock walls on the sides of the river are so steep that "If there is no ice you can only get out of it with wings."

After the second day, the ice is again fragmented and broken in many places. We return to climb the mountain and in some passages we find ourselves with water at our knees. Targay starts to be very worried about the return journey. "We are at the end of the winter season and the melted ice at this point can no longer recompose during the night. Every day the situation worsens. The abundant snowfalls of the previous week would make even an attempt to return along the paths that reach steps over 5,000 m impossible. The risk of getting stuck in the valley until late May seems to be extremely real." 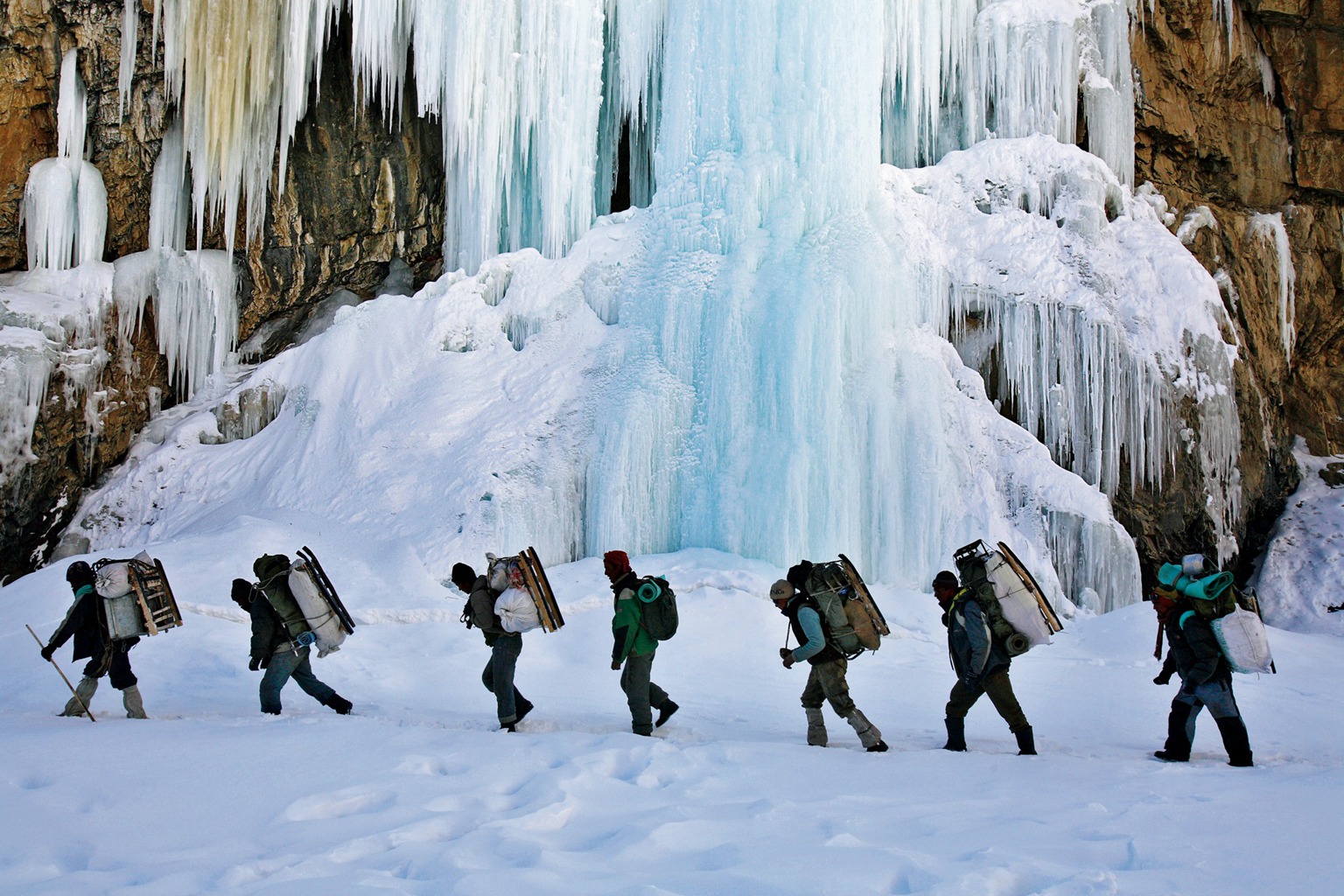 The locals of Zanskar walking past a magnificent frozen waterfall.

So when the valley widens and the path climbs up from the riverbed to cross the first villages with semi-submerged houses covered with white snow, with children sliding on rudimentary skis made with rubber hoses tied to their feet, Targay decides not to waste precious time and with a couple of porters we immediately begin the return journey. I reluctantly greet Thinley, Chadar's veteran janitor, Rajiv and other teachers, promising to return to see them in the summer when the streets are open and the school is in full swing.

A few months later, I decided to keep my promise to return in the summer to meet the teachers at the height of their school activity and share with them the ceremonies for the birth of the Buddha. I thus arrived in Padum the capital of the ancient theocratic kingdom of Zanskar, at the beginning of July.

In a place so deeply marked by religion, one of the most important days for the population is undoubtedly the commemoration of the birth of the Buddha. On this holy day, teachers and students of the various schools of Zanskar go to one of the Dalai Lama's summer residences to receive prayer books that they will carry in procession. Along the path that winds between monasteries, almost all the inhabitants of the valley cluster at the edges of roads and paths bowing to the passage of the procession, to receive the blessing of the books from the hands of the students who rest them on their head. It is an ancient collective ritual that today's students live in a joyful way, transforming sacredness into play and fun.

The following day some classes of students go to the monastery of Karsha, one of the oldest in Zanskar, accompanied by Thenzim Dhandup, the school's teacher of geography and political science, to attend the ceremony presided over by an important Lama from Dharamsala, the Indian city where the Tibetan government in exile is based. After an endless series of prayers accompanied by the sounds of the gongs, the Lama will consecrate offers of rice, barley and other foods to the purifying fire to reach the divinity.

After spending several days inside the school observing the work of the students, I decide to accompany Stanzin Phadah, a young eighteen-year-old student to reach Shilapu a village of 25 souls perched about a 4-hour walk from Padum. where live their parents. During the school year she lives with relatives near the school, but on weekends she returns to the village to help the family with the work in the fields and milking. Resuming the journey towards the school, take advantage of the long journey on the steep path to revise the English lesson in view of the mid-school year exams.

Definitely the study is not an easy thing and even less obvious for the boys and girls of these valleys as beautiful as they are remote and still far from modernization. As well as teaching for professors who in winter must face the Chadar to reach school, it becomes a real mission to be able to pass on the knowledge to the young ones. 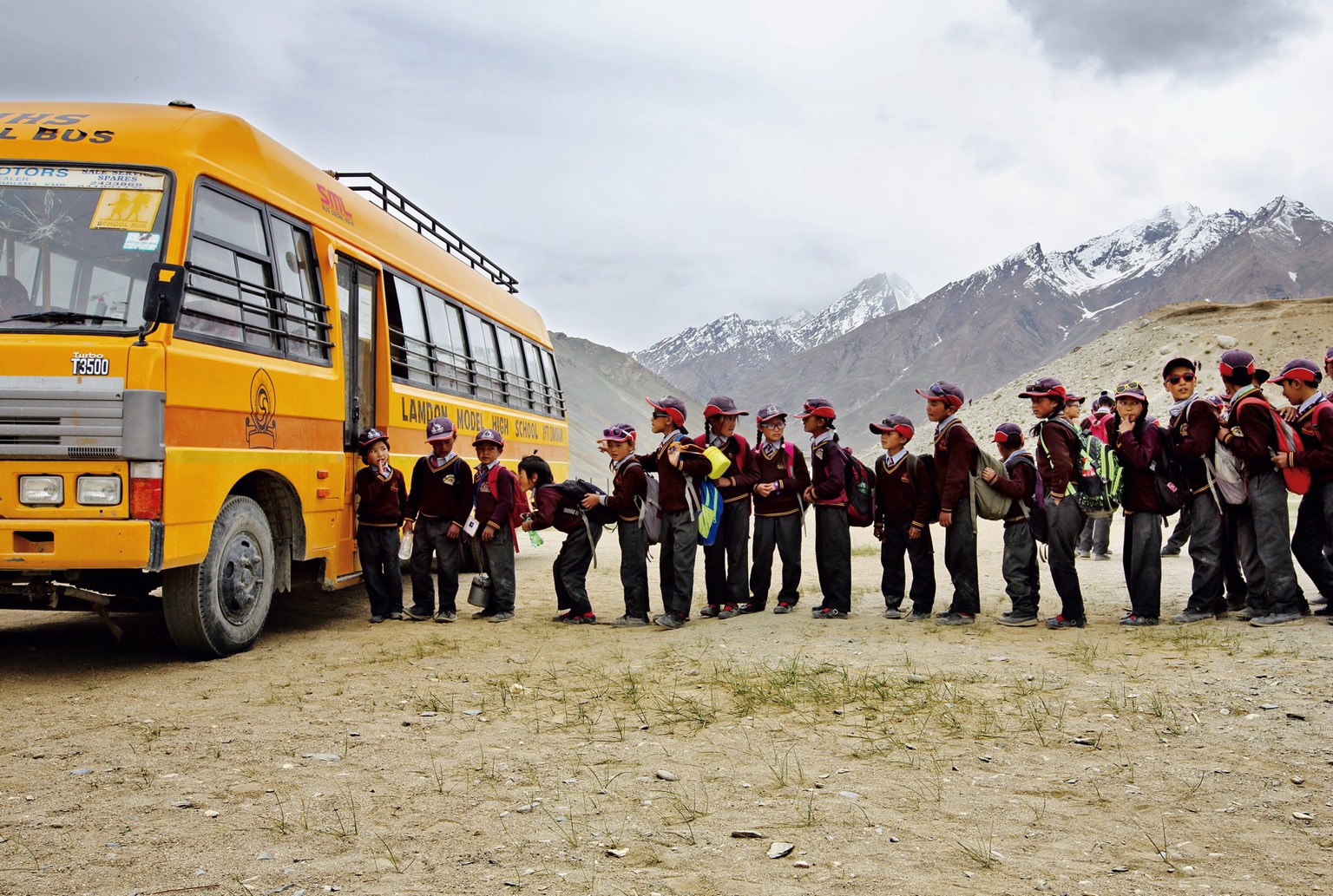 The village schools scattered in the Zanskar valley are largely supported by international organizations that pay teachers' salaries, while many private families help students by paying their tuition fees.