Forty-five years ago, Bunker Roy, an Indian, founded a training center for his homeland's marginalized rural population. His Barefoot College imparts basic knowledge and skills that improve the everyday lives of the poorest – for example, by building solar-powered battery lamps. 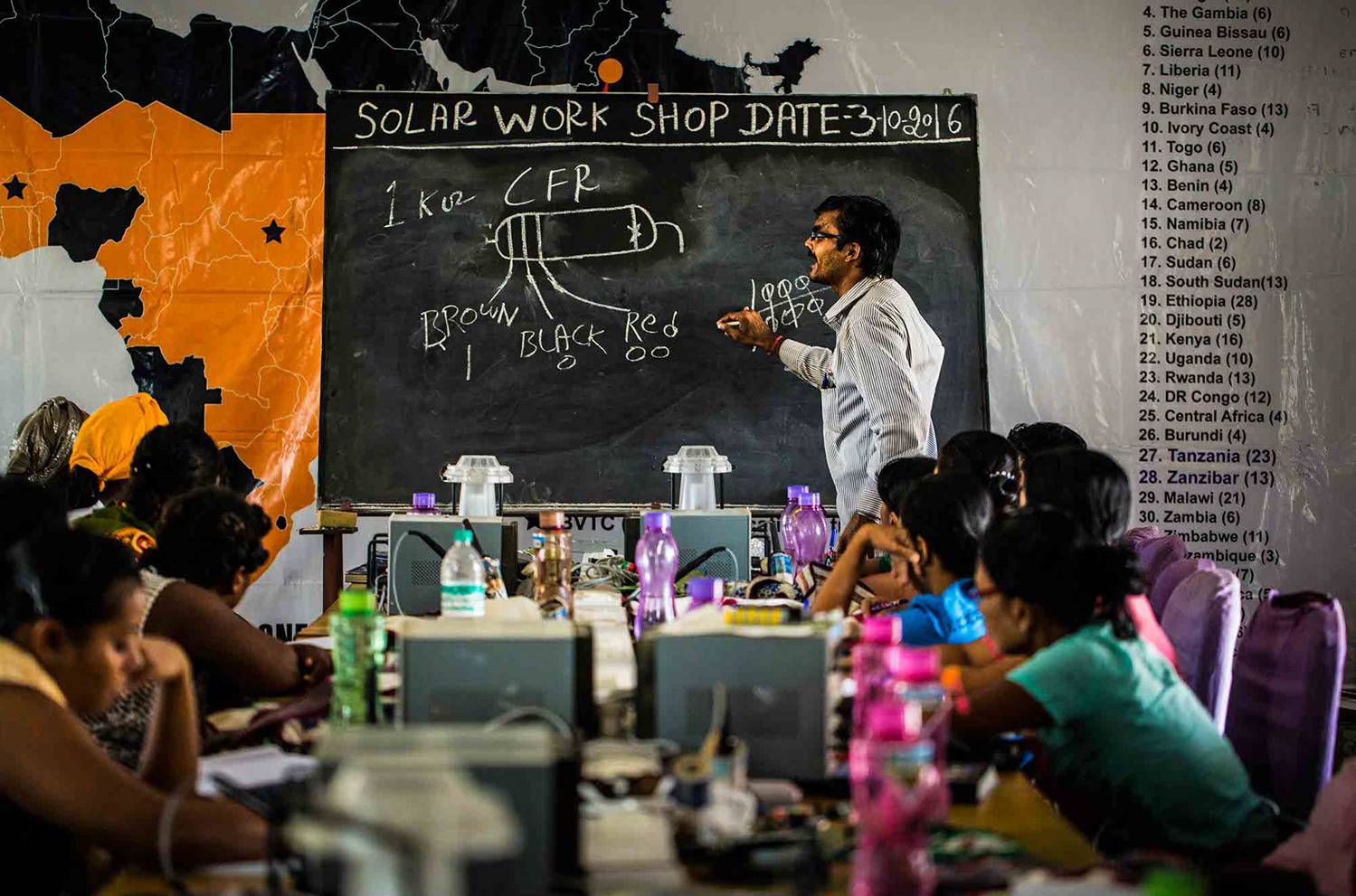 What began around 45 years ago in Tilonia has so far had an impact on the lives of approximately three million people in 77 countries of the global south, who have been able to experience basic education here and thus improve their lives.

The people of Tilonia did not understand why someone like Bunker Roy would voluntarily stay in their village. Only thorny bushes, goats, and poverty far and wide. Even the mountain's view to the north gives no hope: a pale plain cut by a dead-straight train track. If you boarded the train, it would take a hundred kilometers to reach Jaipur, the capital of Rajasthan. But why go there, where no one waits for a have-not from the country. The city with its possibilities is a distant, foreign world.

Roy moved into the abandoned, somewhat eerie lung sanatorium on the outskirts of the village of Tilonia, put a mattress on the floor – and stayed. He even talked to people from the lowest castes. This, of course, caused chatter in the area. Had he done something wrong? Had he been cast out? Maybe he was a criminal. Or was he crazy?

Roy had attended the best schools in India's capital, Delhi, but instead of starting a middle-class career immediately afterwards, he had traveled across the country. In the northwest, there was a drought so bad that people were starving. That's when Roy decided to help.

"I had enjoyed such a good education," he tells me. "Now it was time to give something back." So he procured an earth auger, and with it, he moved about the villages, digging wells and installing hand pumps. Five years this went on. Then he had seen enough. "I realized that people were missing more than water," he says. "There was no electricity, no education or medical care. And people didn't know their rights as citizens – they were forgotten and disconnected." So it took nothing less than: Education. 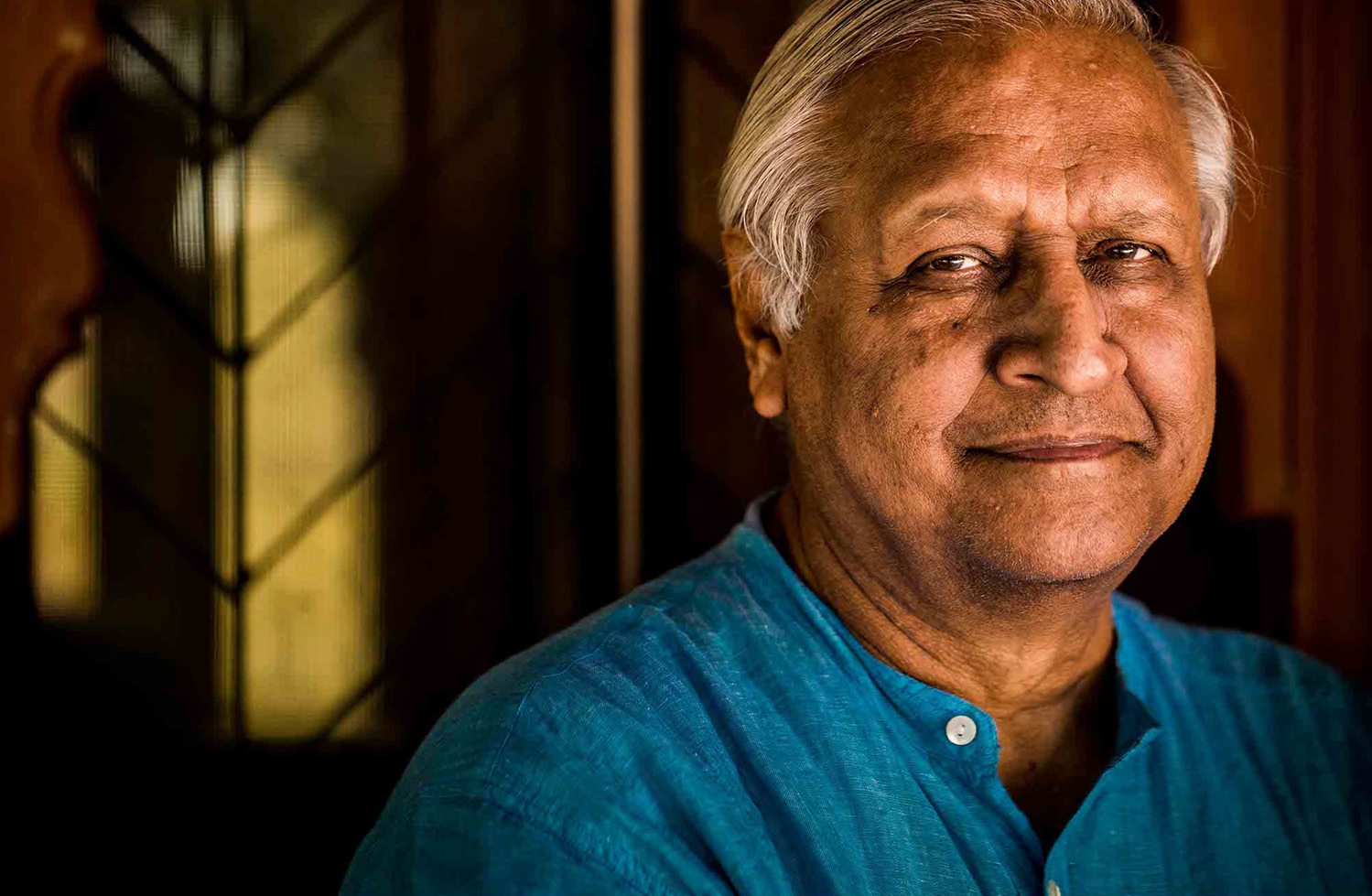 Today, now 72, Roy sits modestly smiling – and barefoot – in his small, unlocked office in Tilonia. In 2010, Time magazine ranked him among the 100 most influential people on the planet, and his organization is one of the top 20 non-governmental organizations on Earth.

And now came the crucial idea: Instead of hiring trained teachers from the city, Roy looked around among the residents. "I realized that of the people who came to us, everyone was particularly good at something." And so, in 1972, what must have been the world's most unusual educational institution, Barefoot College, was born – a school by and for people who couldn't even raise enough money to buy shoes. Roy rented the entire sanatorium for one rupee a month and turned it into a campus. The curriculum included hand-me-down skills. "I chose people who were professionals in their fields – craftsmen, midwives, people with medical knowledge." And they now began to pass on their knowledge. "It was a pretty loopy idea that didn't get much attention at the time," Roy recalls.

In development policy, the realization that structures imposed from above or monetary gifts weaken the recipients' own initiative and reinforce dependencies has only been gaining ground in the recent past. For Bunker Roy, on the other hand, it was already obvious in the early 1970s that everyone can actually take care of themselves. "In the countryside, I learned what incredible abilities people have. They find amazing ways to survive."

What the judge of character Roy can do and how Barefoot College works are all evident in Bhanwar Lal's biography. "I was 14, a shepherd boy," the tall, gaunt man recounts, making the deep furrows that Rajasthan's sun has carved into his face over five decades dance. "Bunker caught me sneaking water from his well." The lad wanted to run away, but Roy wouldn't let him. "He gave me small tasks at first. Then bigger ones. At one point, he came up with the insane idea that I should build a new campus on a piece of land two miles from the sanitarium. The old sanatorium had become too small."

To this day, Lal cannot read or write. But together with craftsmen from the village, he erected the new building complex in the traditional stone construction style of the region – apartments, meeting center, kitchen, clinic. The highlight: large cisterns lie in the ground, storing water supplies for years. 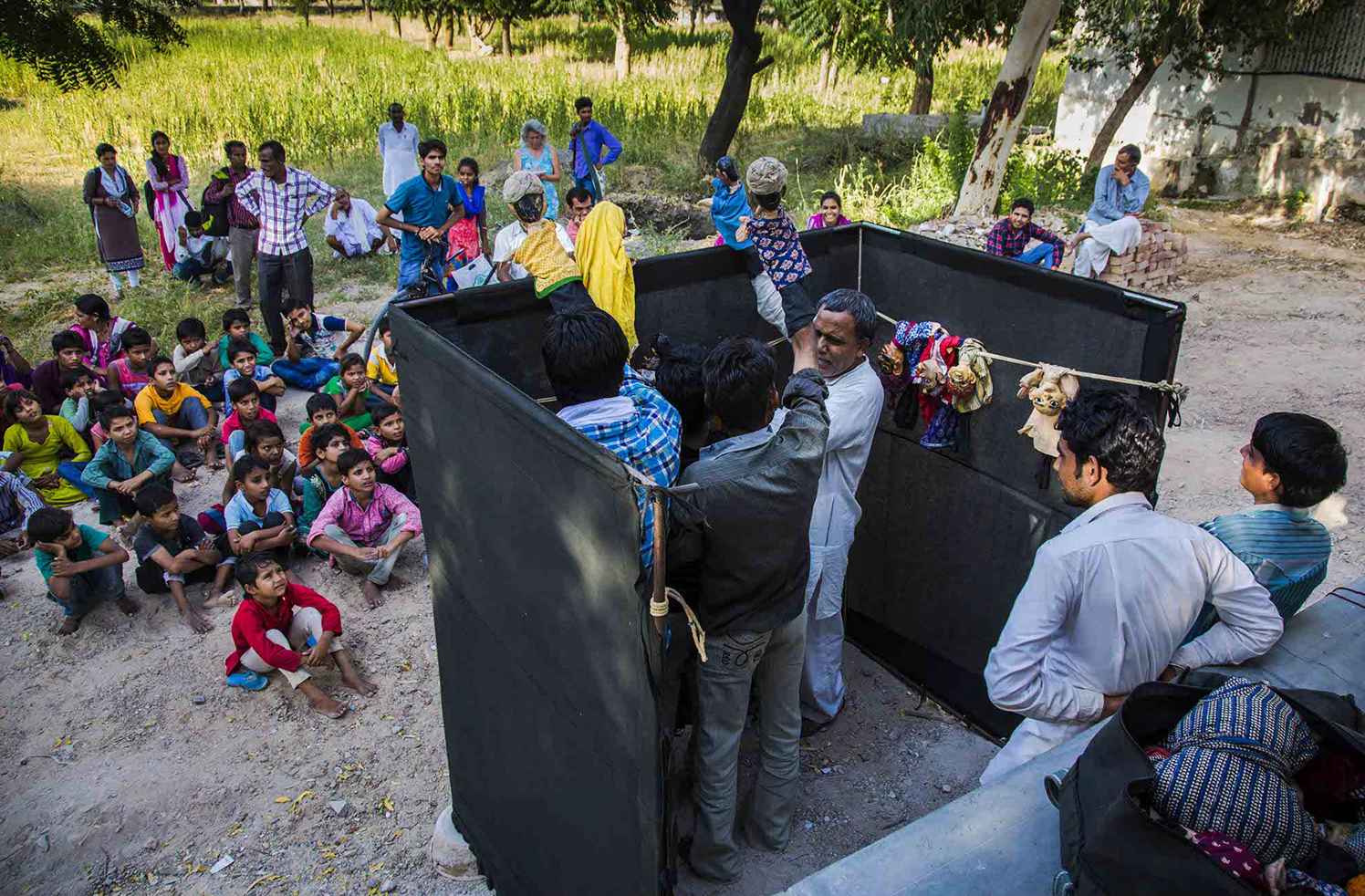 If you want young and old to learn something, it's best to gather them in front of a stage. Show and jokes, then real people to discuss history with, that's what the Barefoot Puppet Theater relies on. People love the centuries-old game with the crooks and the good guys, the fools and the smart ones, despite all the satellite dishes, soaps, and news.

But Tilonia also includes the long-drawn-out toot of the trains that pass every half hour over the plain full of "wild garbage," the thorny brush that clings to the dusty plain of the whole district.

"Garbage gone wild," growls Hanuman, the gardener. "This place was full of it, too." No one in town had believed that anything but these thorns would grow on the rocky piece of land Roy had bought for the new campus. Bunker Roy, however, trusted the farmer's expertise, and today the site resembles a garden. Hanuman strokes the bark of a thick banyan he planted 28 years ago. That was just the beginning. Grinning broadly, Hanuman points to the hundreds of seedlings in his plantation. He shakes his head vigorously. Two weeks earlier, there were 9,000 seedlings here; now, there are only exactly 6,383. The rest have been transplanted to their new destinations.

If a gardener can create green shade in the desert, why shouldn't people here learn to use solar technology? Some 1.2 billion people worldwide live without electricity, 300 million in India alone. Barefoot College is trying to at least bring light to the huts. "It started as a very small project in 1984," recalls Bhagwat Nandan, the teacher. "I got a solar panel that powered two dim lamps. We used those in a night school for girls. This was followed by a government order to equip other schools." Teachers were to maintain the small installations. To train them, the solar workshop was born. "But with the men, there were only problems. Back in the village, they didn't work. So we decided to train only women." 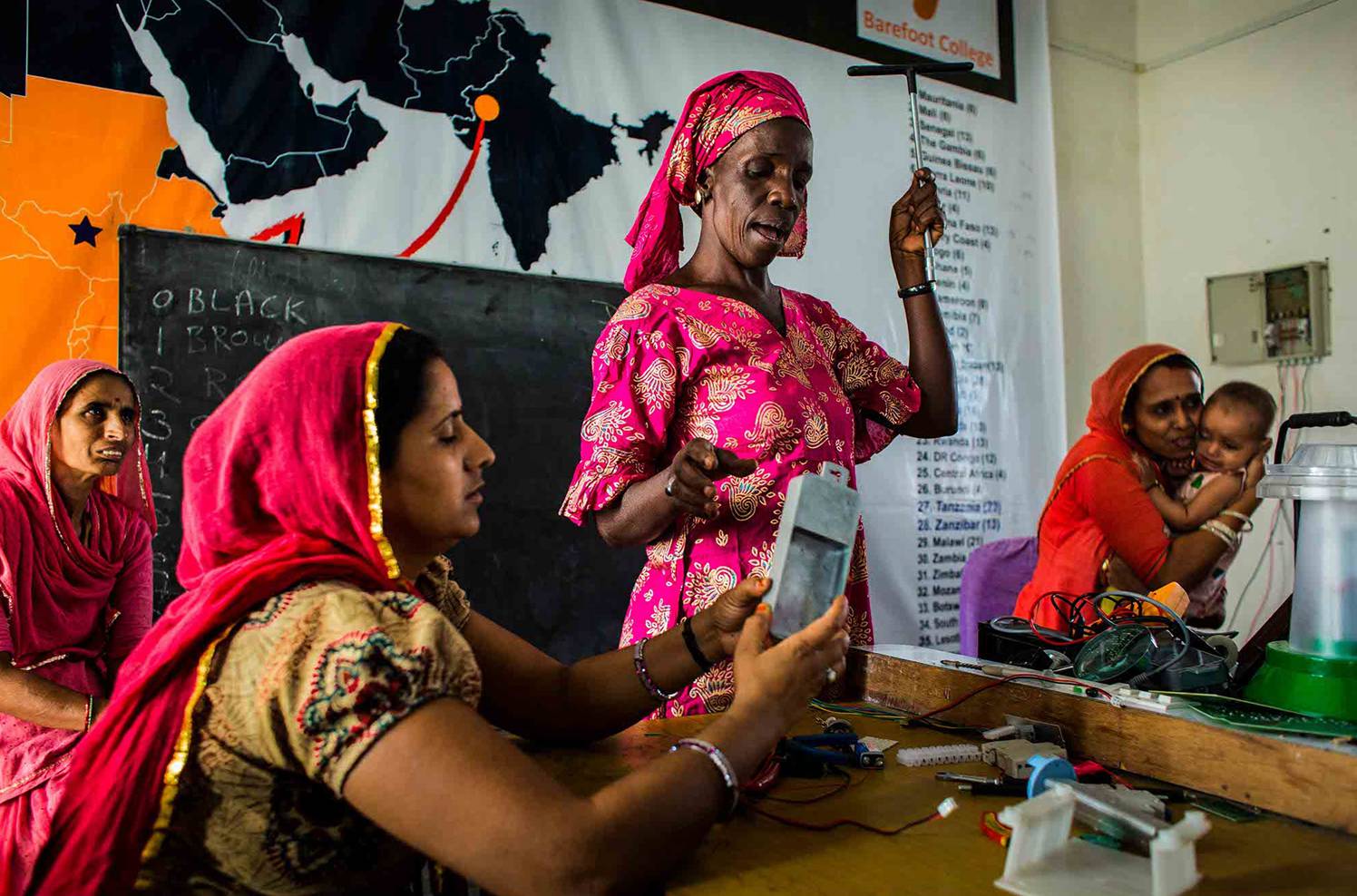 Women from all over the world learn in Tilonia how to screw together battery lamps and charge them with solar power. With this knowledge, they bring light to their home villages, so far to around 500,000 households.

"Screwdriver!" calls Manna, the trainer, holding up a screwdriver. "Screwdriver!" 36 women from eleven countries answer in chorus. "Nose pliers!" yells Manna, presenting the next tool. "Nose pliers!" comes the echo. The names of 23 tools, from screwdrivers to pliers, are learned by the aspiring female solar engineers at the beginning of their six-month training. Then follow the components needed to build a solar lamp: Resistors, circuit boards, diodes, capacitor batteries. Finally, the students have to calculate: Values of resistors and shunts. To do this, they stand at the large blackboard at the front of the workshop and draw the correct values of various resistors in front of all the other women. Some here have never written a word, most of them have never spoken in front of so many others.

The women will return to their home villages with light and a lot of confidence after their training. Aminata Diallo from Senegal talks about the drought that threatens her crops and the irrigation system to which she plans to contribute her salary as a solar engineer. Kingeline from Madagascar wants light in the evening to learn to read, Memphyna from Micronesia dreams of bringing light to every neighboring island, no matter how small, Amira from Syria wants to use her solar wages to send her children to high school, four women from Mexico want to make jewelry out of shells in the evening, Mariéme from Mali just shakes her head and laughs: "Le soir? Allah, dodo!" By that, she means: Until now, she could only pray in the evening and then go to bed. With the light, that will change.

Water, education, rights, equality, light, work, health: most aid organizations focus on solving one of these problems. At Barefoot College, however, the various aid projects developed as organically as Hanuman's garden. In 1988, Bunker began the schooling experiment with teacher Bhagwat Nandan: Over 7,000 children have since successfully completed school at Barefoot College. Besides, there are crèches and night schools for youngsters who have to work during the day, boarding schools for runaways and disadvantaged children, and of course training for future teachers. Bunker Roy has even created a children's parliament where students can practice democracy. The hospital on campus is staffed by dentists, doctors, midwives, and a pathologist, all of whom have no traditional training. They pass on their knowledge to health workers for villages cut off from medical care.

And when change is slow, you just have to ride it out. Bunker Roy found that very difficult during his first time in the country. "Patience!" he smiles, imperceptibly cradling his head, "How endlessly everything takes! Dealing with that was not easy for me." But he stuck to his credo: "You have to let people do it themselves. Our future depends on ordinary people being able to solve their problems on their own." 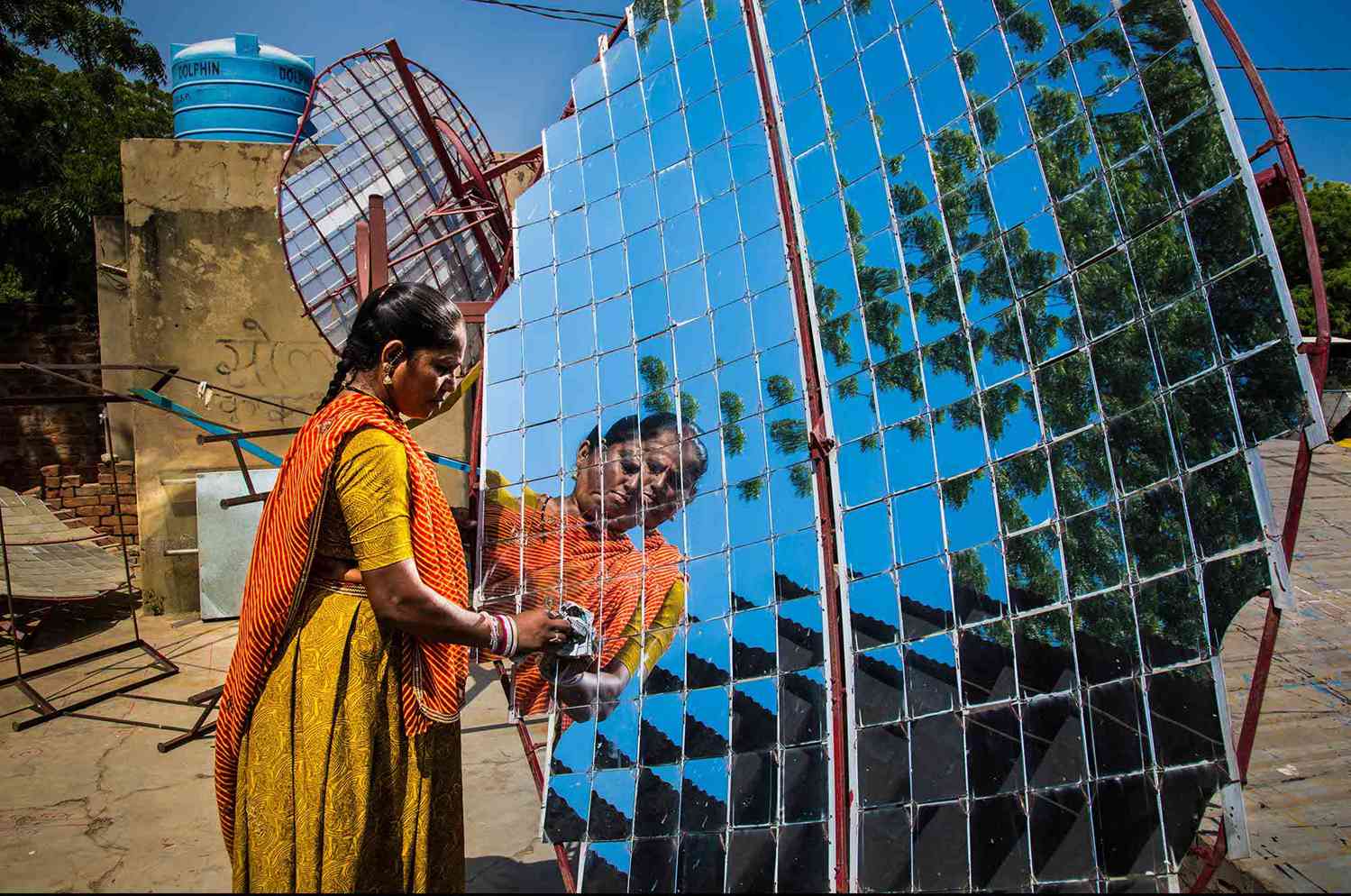 The village community determines a price that the individual families have to pay for the solar moms' service. It is in the range that a family had to spend on candles and kerosene until now.