The First Buddhist Monk in Uganda

The First Buddhist Monk in Uganda

The most venerable Bhante Bhikkhu Buddharakkhita, first Uganda's Buddhist monk, was born and raised as a Roman Catholic. The Theravada monk through his teachings and meditation instructions is on a mission to spread Buddhist tradition across the African continent. 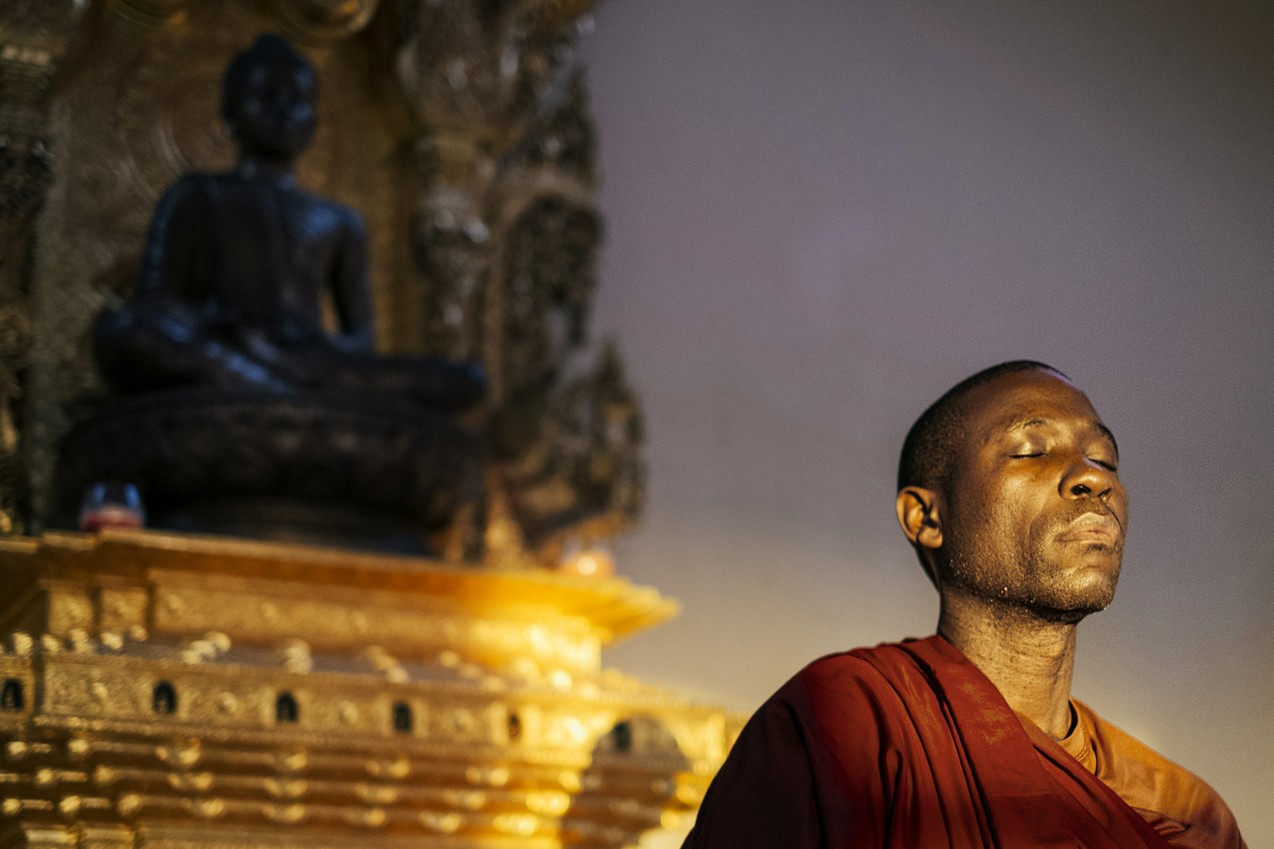 Despite the criticisms and misunderstandings, Buddharakkhita firmly believes that Buddhism can bring peace and happiness to Africa.

Founder and abbot of the Uganda Buddhist Center and temple, and author of Planting Dhamma Seeds: The Emergence of Buddhism in Africa, Buddharakkhita was born Steven Jemba Kabogozza on 10 October 1966.

He picked interest and converted to Buddhism in 1990 while studying in India and has been teaching mindfulness meditation in Africa, Australia, Europe, Asia, South America and the United States of America since 2005.

"I had gone to India to study business studies at the University of Panjab, which turned into Buddhism," said a 54-year-old shaved head monk in an interview from his hillside centre overlooking Lake Victoria at Garuga, about 40 kilometers, south of the capital, Kampala.

His change of heart to embrace Buddhism followed the two month strike during his studies at the University of Panjab. "There was nothing which was going on. It was all a mess. I was so frustrated and I wanted to leave," says Buddharakkhita.

"However, I met two monks from Thailand who weren't part of the strike. These people were so peaceful. Their lifestyle was very admirable. I got attracted to these monks and they became my only friends," he said.

"Whatever they did aroused my deep feelings of loving, kindness and gratitude. I got interested in Lord Buddha teachings and I embraced Buddhism very well. I felt very peaceful and forgot all the problems." 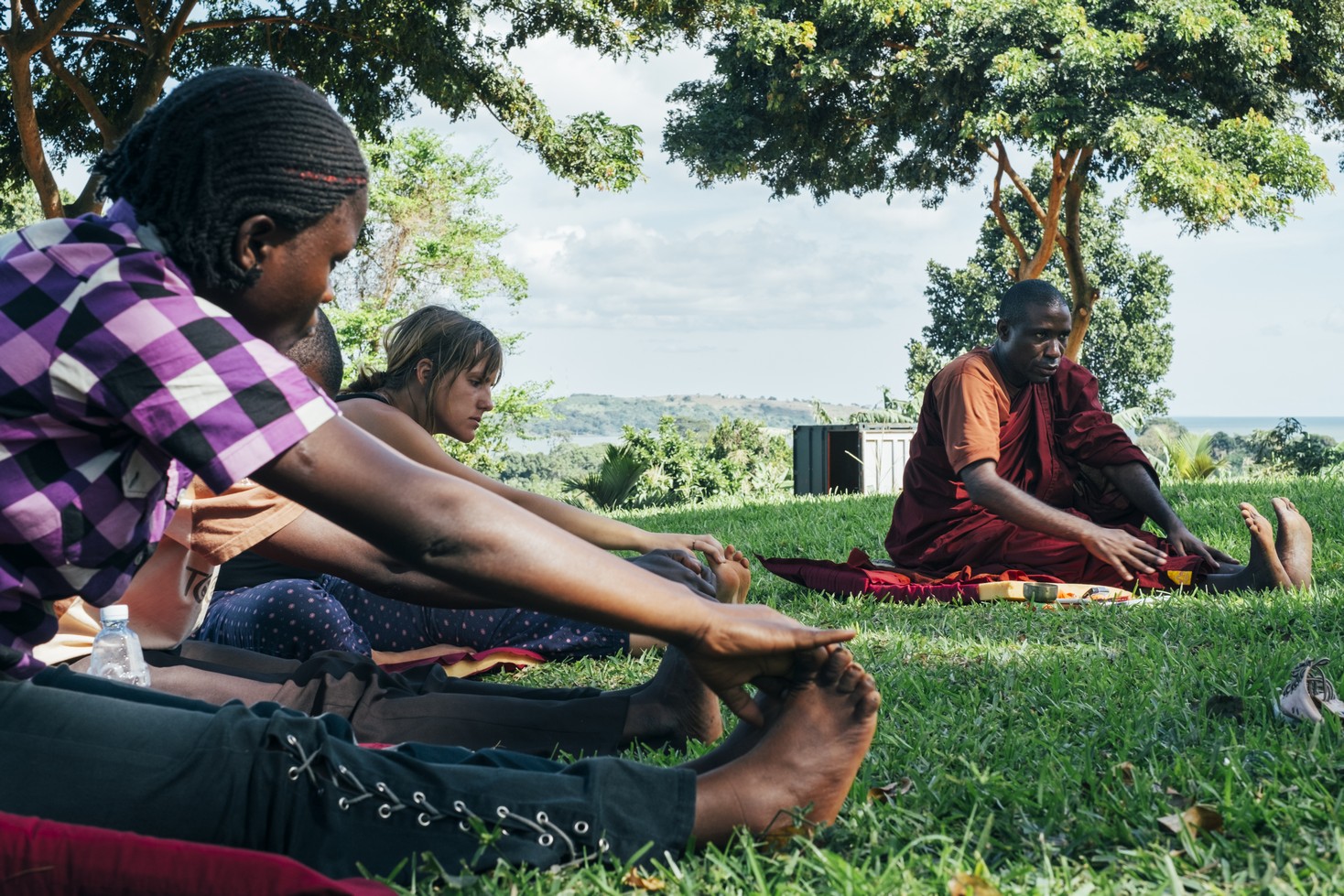 Before the COVID-19 pandemic, many foreigners used to come and receive training from Buddharakkhita.

A monk for 19 years now, Buddharakkhita started his training in 2001 as a novice, was ordained as a Theravada Buddhist monk at the Tathagata Meditation Center in San Jose, California in 2002 by the late Most Venerable Sayadaw U Silananda.

His training took him from India to West Virginia, U.S. and Brazil before he finally returned to Uganda and established the Buddhist centre in April, 2005. He spent eight years under the guidance of Bhante Henepola Gunaratana at the Bhavana Society.

"I disengaged from my teacher in 2009. I told him that I was going to be on my own. He blessed and told me from now onwards, you are on your own."

Buddharakkhita's pursuit to become a monk hasn't been an easy ride in the foreign countries he traveled and lived. He was once a scuba dive instructor in Thailand.

"It was very difficult for me to make ends meet as I didn't have a permanent job in those foreign countries. I became a scuba dive instructor for two years to make a living," said Buddharakkhita

Buddharakkhita who was once attacked at his center and narrowly escaped a bullet at close range over suspicion of being a wizard continues to encounter public misconceptions and cultural misunderstandings about Buddhism.

"People think Buddhism is Asian and Chinese, attached with kung fu, taekwondo and karate, not belonging and relevant to Africa. I blame it on a lack of education. In schools here, they haven't educated us about Buddhism," he said.

He is now focusing to make change and paradigm shift about Buddhism in Africa, saying, "I am teaching Theravada Buddhism with African flavor and context to really make it relevant to Africans and make sure people understand and don't see it as something weird, foreign and Asian."

"I’m looking at meditation practice and how it can heal intergeneration trauma. Most people are traumatised. We have colonial hangovers and a lot of stuff is going on," says Buddharakkhita.

"We do mediation classes, compassion in action, spiritual retreats and yoga from time to time to help purify the mind from greed, delusion, hatred, fear, confusion, anxiety and mental impurities,"

"All these activities are geared towards bringing happiness within oneself and getting knowledge about how to be peaceful." 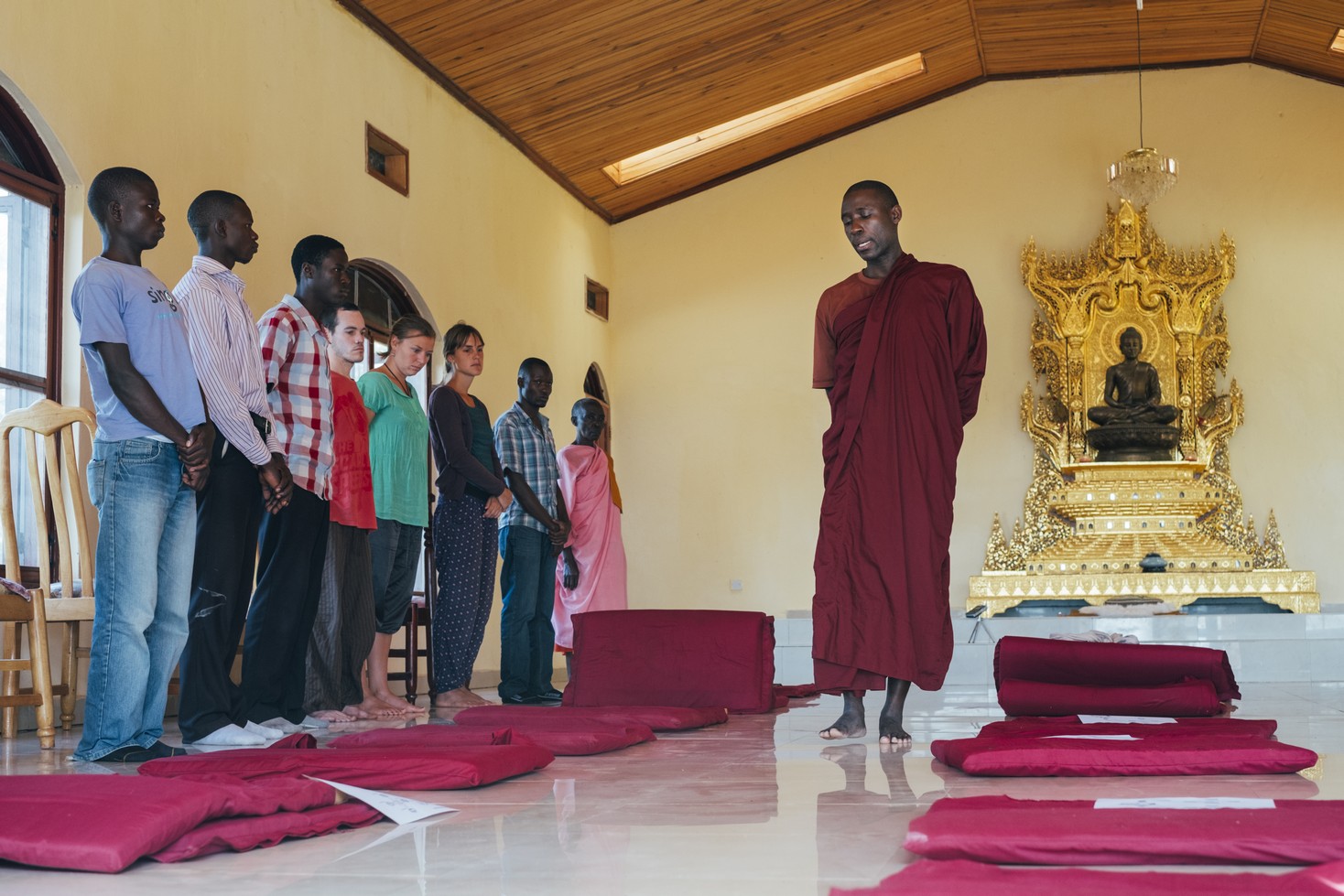 The statue of the "African Buddha" was built by Buddharakkhita's followers in Thailand.

Buddharakkhita’s humanitarian initiatives have focused on social and economic programs such as women and youth economic empowerment and education to viably improve and uplift the people’s economic standards.

Over 5,000 people have access to safe and clean water daily in his neighborhood, and women and youth have been trained in entrepreneurial skills. His ambition is to train at least 54 novices in the next five years, one for every of the 54 African nations to teach and spread the message.

"We lack African monks who are well trained to teach and be torch bearers in the continent. In Uganda we are only two monks in a country of over 40 million people," said Buddharakkhita.

In 2015, Buddharakkhita founded the African Buddhist Union, an umbrella group aimed at uniting practitioners across the continent. "There is a lack of networking among Buddhists and organisations in Africa. Each of them seems independent. My role is to make sure I solve this problem and make sure there is a network," said Buddharakkhita.

The COVID-19 crisis in Uganda and the subsequent eight-month lockdown restrictions imposed by the government last year has negatively affected Buddharakkhita's work. He hasn't been able to travel or receive foreign guests.

"We are struggling. We have few supporters financially. There is no independent or international organization funding us. It's just people and individuals who are funding this cause but are not as many as other religions," said Buddharakkhita.

"I am eternally grateful to all people who have helped and supported us thus far. They have given us a long life, beauty and strength. I want to give them four fold blessings." 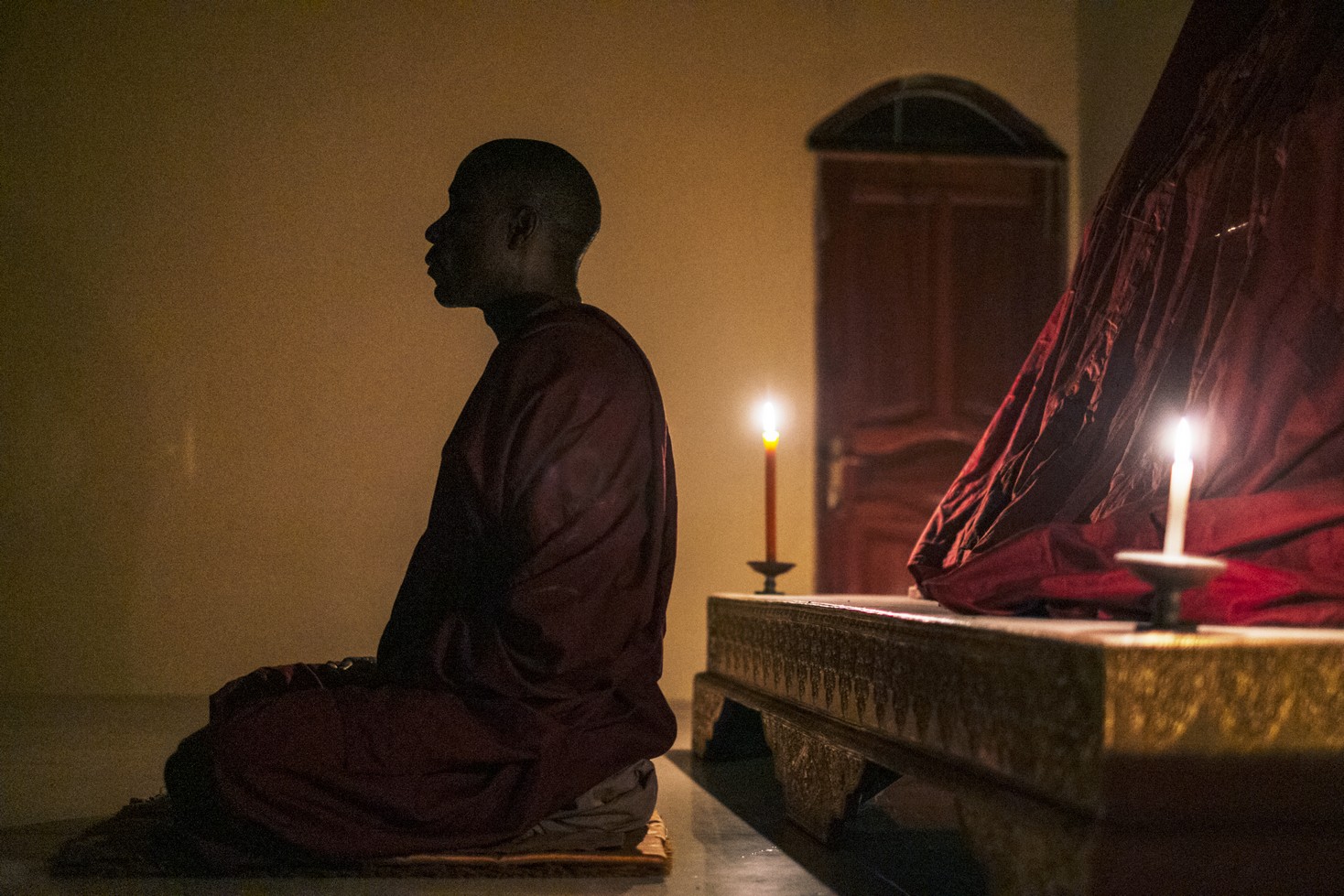 After a busy day teaching classes, Buddharakkhita meditates in front of the Buddha statue.