A Ride on the Bergen Railway

A Ride on the Bergen Railway

Enjoy a scenic ride on the Bergensbanen, the highest railway in Northern Europe which crosses the Hardangervidda plateau at 1,237 meters above sea level. 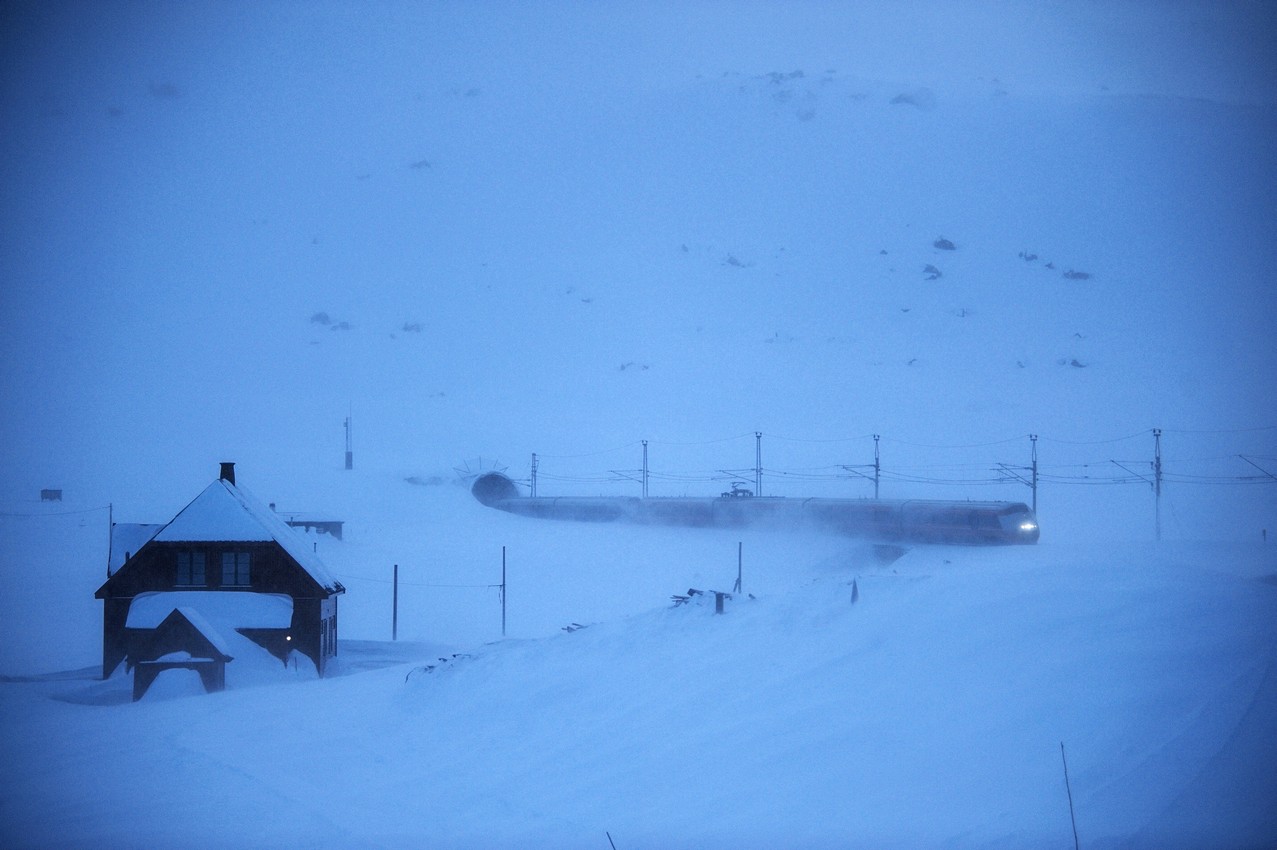 The howling winter winds and heavy snowstorms cover Finse in a beautiful but strangely unnerving carpet of white.

When the train leaves the Oslo railway station, only an imperceptible metal squeak seems to presage what it means to cross, in the middle of the winter, one of Europe's most challenging territories. The Bergensbanen, the highest railway line of this importance of the European continent, crosses the mountain range that divides eastern Norway from the fjords and rough mountains into western Norway's Atlantic shore, connecting Norway's capital to Bergen, the second-largest city in the country. At least seven hours of travel, to be done especially in winter, to understand what it meant to build 493 kilometers of tracks, 300 bridges, and 182 tunnels that all together reach 73 kilometers. At the beginning of the journey, the train glides silently between villages that emerge from a snow carpet while the passengers quietly look at the screens of their smartphones.

The visionary project of a railway linking Oslo and Bergen was the dream of Hans Gløersen, the forest superintendent in Voss. In 1871 only one ship skirting the Skagerrak joined the two cities that summed up the country's different identities, divided by the mountains between the sweetest climate at east and the much harsher west.

Despite controversy and difficulties worthy of a Nordic saga, in 1883, almost two thousand workers coming mainly from neighboring Sweden had already built about a hundred kilometers of the railway that meandered from the fjord of Bergen to Voss, sixty meters above sea level. Only seventy-five kilometers were missing, but the most significant problems had yet to come because reaching Taugetvan, the highest point of the railway, needed to climb the mountains for an altitude of 1250 meters more, in a challenging natural environment. 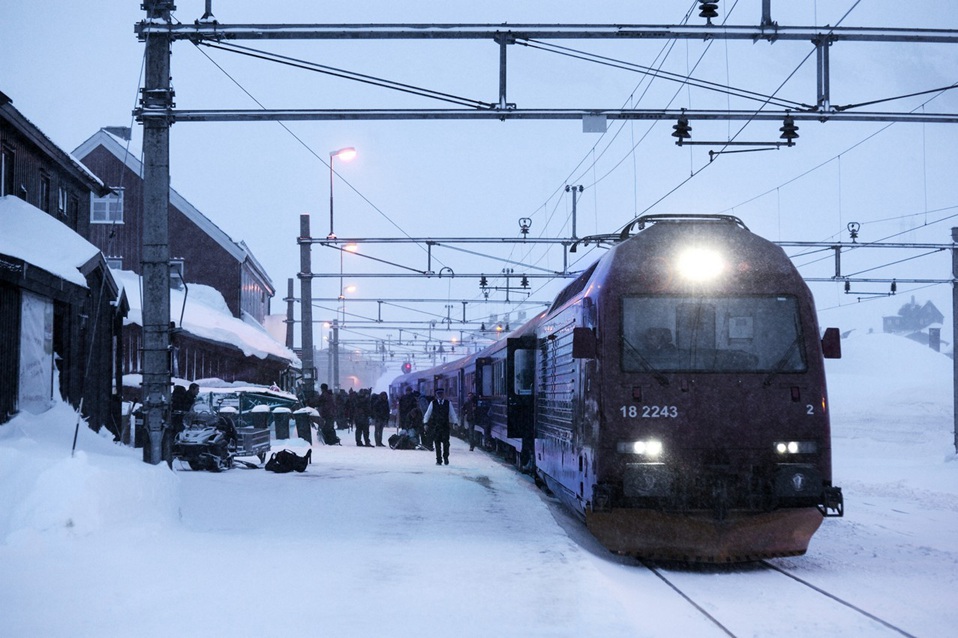 The Bergensbanen is used mainly as an intercity railway capable of surviving even extreme meteorology that can block roads and airlines.

They began to build the roads necessary to bring materials and supplies for the future railway, at a high altitude and with an extreme climate, most often with horses. Over seven hundred tons of dynamite decided the fate of the Bergensbanen. Still, many tunnels had to be excavated through solid gneiss rocks by fifteen thousand workers, like the tunnel of Gravhals 5311 meters long, the longest railway tunnel in Europe north of the Alps, requiring six years of work, mostly by hands. In 1907 the workers advancing from Oslo and those rising from Bergen had met in Haugastol but, to remind everyone that here the wilderness was still in power, a deadly snowfall blocked for over a month the railway. Only on 10 June 1908, the first train departing from Oslo had reached Bergen, where King Haakon VII welcomed the inaugural convoy. The following year the railway opened to traffic, but it still needed battle against an ever tougher enemy than the rocks, the snow that had to be fought every winter for nine long months. 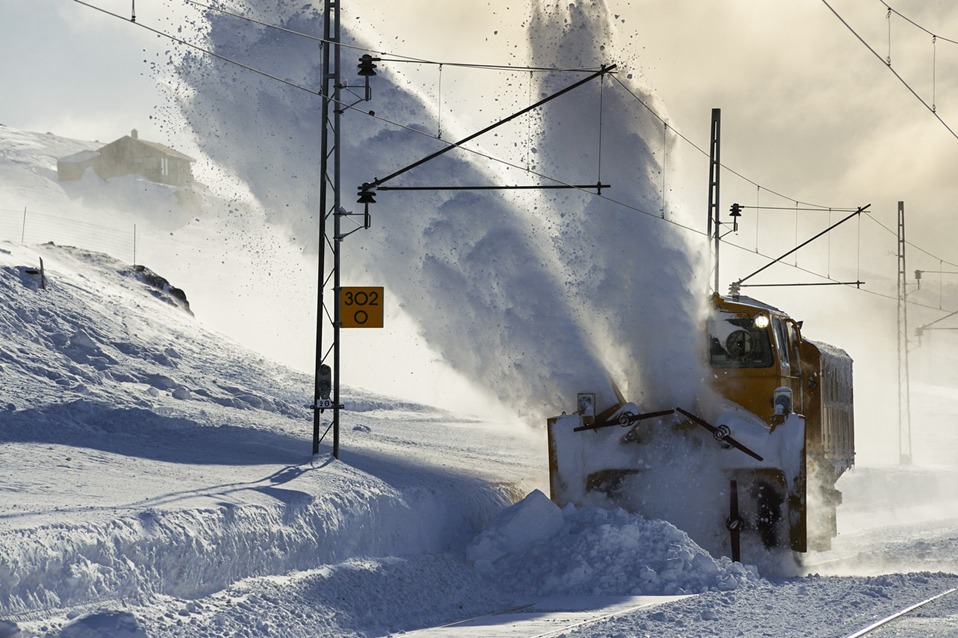 Large snowplow machines clear the rails every day to ensure safe travels. In the never-ending battle of man versus nature, climate change may not be what we are hoping for.

"Today, this is a train like any other, and new convoys have replaced those of heroic times, although in some tunnels there are still deposits of provisions for possible emergencies," reassures a controller. "The only difference is that the new trains are less suitable for dealing with snow and we need to use large snowplow machines that clear the rails every day. Frankly, our colleagues in Oslo are causing us more problems with their electronic signals than the snow delays. There is also a new high-speed train project between 2030 and 2060, but happily, they did not close this line as many politicians asked for until a few years ago. They said the Bergensbanen was too expensive and wanted to replace it with a highway and bus lines, but happily, they understood that this project could have caused an ecological nightmare". As he speaks, only ice-swept small stations emerge from the snow outside of the train, the only connections to the small villages, often reachable in winter only by skis or snowmobiles. For many Norwegians, this region is a paradise of freedom where everybody may isolate himself from the world in lonely cottages, often without electricity and hot water, something often essential for the Norwegian soul.

A long sequence of tunnels and avalanche defenses announces the convoy's entry into the heart of the Hardangervidda, where silence turns into an acoustic void, broken only by a wind that seems to cancel everything and everyone. An Arctic scenario used to test the famous polar expedition of Shakleton, Nansen and Amundsen, and a perfect location for film productions. Even in The Empire Strikes Again, an episode of the Star Wars, Hof's frozen planet’s battle has been set on Hardangerjokulen glacier.

"Don't tell me about it, even today after many years every summer the mountain guides take the fans of the movie there to play with figurines of Princess Leila and Harrison Ford," confess with imperturbable aplomb the receptionist of the historic hotel Finse 1222. 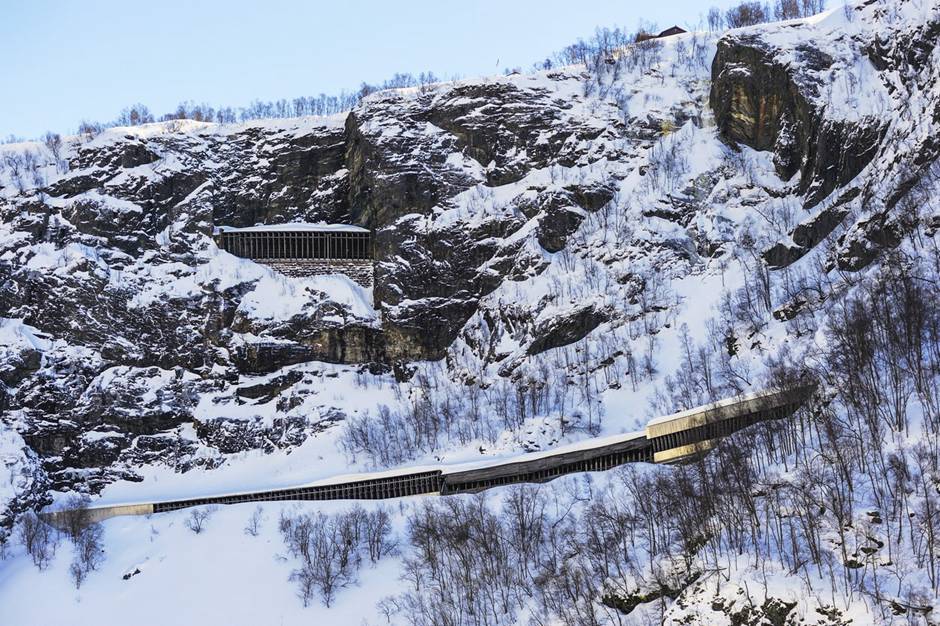 The historic hotel Finse 1222, refers to the location and altitude of a place originally built to house engineers and workers building the railway.

In the last years, however, this world of ice has become vulnerable to climate change. According to an article published in 2017 on Science Daily by Henning Akesson of Bergen University, the Hardangerjøkulen, with measured 73 square kilometers in 2012, could fully melt by 2100.

The possible disappearance of Hardangerjøkulen has many implications, not only impacting Norway's tourism but mainly the hydropower industry because 99 percent of Norway's hydropower production depends on glaciers' water storage.

In the meantime, higher up the mountain, the Bergensbanen continues its descent into a more peaceful nightly landscape of hills and villages to Bergen station, where reappear escalators, noise, traffic, and luggage. The everyday world is back.