As the COVID-19 pandemic has disrupted trade around the world, many countries are starting to realize the importance of food self-sufficiency. Equally important, if not more, is the stability of water supply needed to sustain the agricultural sector. Here is a look at how Taiwan manages water resources to grow food for its people. 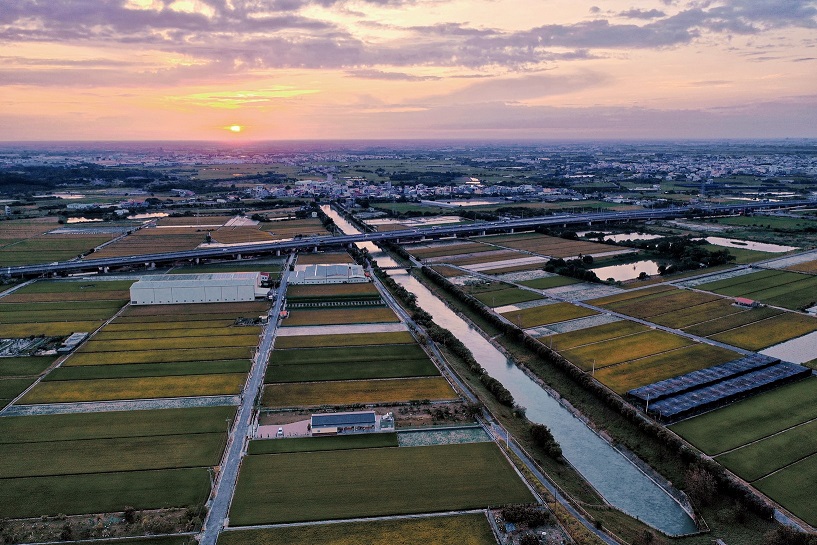 Irrigation canals are like blood vessels in the body, sending much needed water and nutrients to where they are needed. (Photo by Ayen Lin)

"Food self-sufficiency is a matter of national security," declared President Tsai Ing-wen (蔡英文) during the 2020 National Agricultural Congress. She urged for more efforts to increase Taiwan's food self-sufficiency from 34.6% to 40% by the end of 2020. However, as extreme weather conditions have become even more prevalent, the key to reaching that goal is a stable supply of water.

One of the most important water sources for agriculture in Taiwan is the Chianan Irrigation System, designed and built by engineer Yoichi Hatta and his team during the Japanese colonial period. The canals and waterways amount to a length that is almost half of the Earth's equator, and they have massively increased farmable areas and productivity as well. This large-scale water system is managed by the Chianan Irrigation Association, which is headed by Yang Ming-feng (楊明風). On the day of the interview, Yang and his team was holding a simple prayer ceremony to the heavens for rain and a bountiful harvest. The farmers' fate depends on the heaven's will, said Yang. 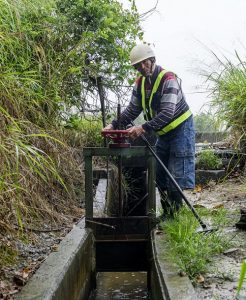 Canal Controllers
A canal controller is a job position unique to the Chianan Irrigation Association. Since the early days, the management has hired experienced local farmers to help with water allocation during water rationing. They also assist in communicating with the other local farmers and repair canals and waterways.

"These controllers may be of age, but because they have been farmers their whole life, they know exactly what the other farmers are thinking and what the crops need. With just a simple survey of the area, they can determine which plots of land need more water and which ones are wasting water," commented Yang. Due to the efforts of these 2,000 plus canal controllers, the Chianan Irrigation Association was able to save 63 million tons of water in one year.

Crop Rotations
In Taiwan, irrigation constitutes around 11.2 billion tons of water a year, with up to 80% of the water used in rice paddy fields. "Hence, we always encourage farmers to adopt crop rotation," said Tan Chih-hung (譚智宏), director of Agricultural Engineering Research Center located in Taoyuan City. "Due to changes in eating habits, Taiwan's rice production for the past few years has been sufficient for local consumption," he added. "On the other hand, demand for other grains such as soybean, wheat, and corn are rising every year. Yet, we did not see an increase in local production of these grains, but rather an increase in imports to meet the demand. If we are to increase our country's food self-sufficiency, this is an area we can work on," suggested Tan.

"We started doing experiments to see which combination of crops save the most water," said Hong Ming-de (洪銘德) from the Council of Agriculture's Department of Irrigation and Engineering. One of the experiments was the rotation of rice and soybeans. Without rotation, two harvests of rice required 8,886 cubic meters of water per hectare. A rotation of rice and soybeans only required 6,686 cubic meters, saving up to 2,200 cubic meters of water.

In this wheat field in Jiayi County, one of Taiwan's recent experiments on dry farming has been conducted. (Photo by Seitei Huang)

Irrigation Techniques
There are also many different irrigation techniques, which are introduced to us by Pan Li-hui (潘麗慧), an assistant researcher at Agricultural Engineering Research Center. "There's drip, sprinkler, perforated pipe, etc.," explained Pan. Drip irrigation is a very precise irrigation method, sending water and fertilizers directly to the roots of plants. Sprinklers use pressure to mimic rainfall by drizzling water on crops. As for perforated pipes, water is sent into these pipes and spurt out through tiny holes. 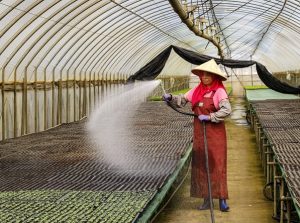 To ensure that crops get the exact amount of water they need, manual watering is still needed to supplement automatic irrigation systems.

"By targeting the characteristics of different crops, new irrigation methods aim to send water to the parts of the plant that need it most, when they need it most," said Pan. She then led us into one of the greenhouses, which offered a very soothing escape from the summer heat.

"I started using sprinklers ten years ago," said Li Chuan-tian (李傳添), a 70-year-old farmer who is not afraid to try new things. By choosing to use greenhouses, he can ensure the good and consistent quality of his crops as their growth is unhindered by the seasons and the weather. He is now a main supplier of many giant supermarkets.

Li said that he used to flood his crops, but later learned that such method wasted too much water. "I followed the expert's advice and changed to this sprinkler system. Now I can control the amount of water used." However, as these types of equipment can be costly, "not everyone is willing to change," he added.

Smart Agriculture
Tan told us that there are AI water conservation systems now which can not only reduce the manpower needed, but can also collect and manage various data such as temperature, wind, water content, etc. Having these data firsthand can help farmers manage their irrigation systems more efficiently. "However, technologies can only provide the data. The practice to conserve water is still up to each of us," said Tan. 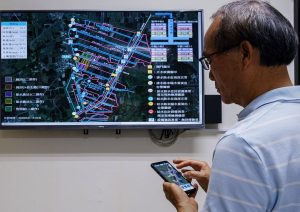 Agriculture is no longer a "traditional" sector, as technology can be conveniently used to monitor fields and water usage.

"Many farmers feel that water conservation is none of their business, as the government subsidizes water costs anyway." Tan further explained that the low cost of water brings about many disadvantages, such as water companies not having enough funds to repair or maintain old pipes, or the need for water rationing during every dry season. "Low water fees actually encourage people to waste water," Tan said.

Taiwan can learn much from Israel. With an average annual rainfall of only 300 millimeters on 60% of their land, the country has managed to have an impressive agricultural development using advanced irrigation techniques. By using only 5% of their total workforce, Israel grows 90% of the country's food and export more than 40% of their produce.

If Israel can do it, can Taiwan do it too? Just as President Tsai stated, water and food are matters of national security. To ensure their steady supply, we need to plan ahead and be proactive in managing our resources.

A heavy rainstorm after a period of drought in Tainan gave this farmer the perfect conditions to plant water caltrops.