The Rise of Vehicle Sharing

The Rise of Vehicle Sharing

Combining the convenience and flexibility of privately-owned vehicles and the affordability of public transportation, can vehicle sharing revolutionize our way of travel? 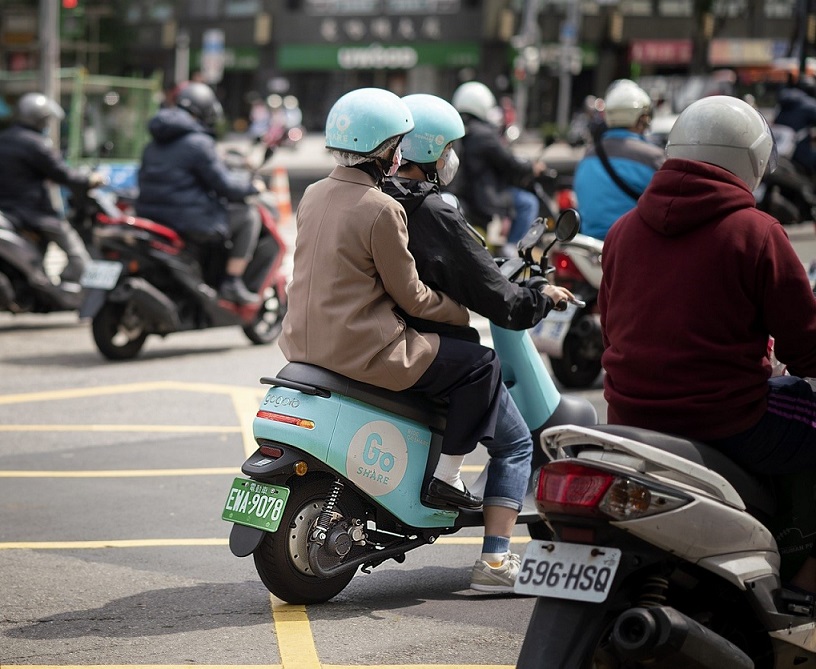 Vehicle sharing may bring a breath of fresh air (literally, in the case of e-scooters) in densely populated cities such as Taipei.

Every morning, Su Yi-hua (蘇逸華), who lives in New Taipei City, uses a smartphone app to search for nearby scooters, finds the scooter on the map, rents it with the click of a button, puts on the helmet stored in the compartment, rides it to her workplace in Taipei which is 4km away, and then ride another scooter back home after work.

Commuting via scooter is very common in Taiwan, but the scooter Su rides every day to work is not her scooter but from a scooter sharing service. Three years ago, 200 shared scooters appeared in Taipei. It was a pioneer project by WeMo Scooter which granted its users the freedom to rent scooters by the minute with a smartphone app.

The Start of Vehicle Sharing: YouBike
Years ago, the idea of vehicle sharing was unheard of. But now in Taipei, it is common to see people riding YouBikes everywhere, and back then you could even see queues for the bicycles or their parking spots. Ever since the official launch of YouBike in 2012, bicycle sharing has been successfully integrated into the daily lives of Taiwanese, proving to be a convenient transport option for the first and last mile of their journey. 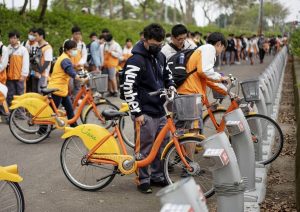 Students from a vocational school at Miao Li in Taiwan, rely heavily on YouBike as it can transform their half an hour walk to the nearest train station into a light and breezy bicycle ride.

To date, YouBike has more than a billion registered users, and has one of the highest usage rates for public bicycles in the world, with millions of trips traveled monthly. During its peak period, on average a YouBike in Taipei can be rented up to 12 times in a single day. In Taipei alone, there are around 13 thousand bicycles and more than 4 hundred docking stations. Seeing its success, other cities in Taiwan also started their public bicycle systems, and cities from other countries also came to learn from YouBike.

"The docking station at Gongguan MRT station is one of the most popular stations, with up to 50 transfers from a single dock in a day, so 60 docks can effectively replace the need for approximately 3000 bicycle parking spots. Public bicycles not only cater to the user's transportation needs but can also reduce the prevalence of indiscriminate parking of bicycles," commented Vicky Yang (劉麗珠), the spokesperson for YouBike.

To accommodate the rapid growth in cyclists, Taipei has paved more bicycle paths in recent years to bolster its cycling network. However, cycling is only suitable for short distances, and the cycling routes are not interconnected and comprehensive enough, so for most daily commutes, bicycles still could not substitute scooters or cars.

Taiwan has one of the largest populations of motorcyclists in the world. According to the statistics from the Ministry of Transportation and Communications, there were only 42.2 motorcycles per one hundred people in 1988, but the number doubled to 93.7 in 2019. In the same period, car ownerships grew from 10.5 per one hundred people to 34.4, tripling in a matter of years. 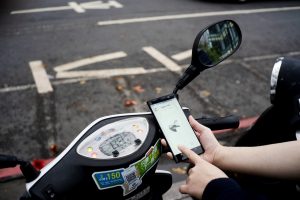 Compared to traditional vehicle rentals, the whole process is now made easy with technology and can be done anytime, anywhere.

From Private to Public Transportation
The huge amount of vehicles on the road also translates to higher safety risks. Jason Chang (張學孔), a professor and director of Advanced Public Transportation Research Center at National Taiwan University, pointed out that road accidents resulted in close to 3 thousand deaths and around 40 thousand injured in Taiwan every year. Accident-related death rates per hundred thousand people far surpassed neighboring countries such as South Korea and Japan by two or three times. These crashes cause an annual loss of 3.172% of GDP, with more than 15 billion U.S. dollars in economic loss. He recommends the use of measures such as parking fees or environmental taxes to discourage private vehicle uses, and also encourage people to change to public transportation or vehicle sharing.

Undoubtedly, using your vehicle to travel is convenient and flexible, and the Taiwan government's previous policies facilitated the growth of vehicle ownership. "Every transportation choices will incur some social costs. Motorcyclists cover one-third of them while car drivers cover the other two thirds," commented Jason.

Founder and CEO of WeMo Scooter, Jeffrey Wu (吳昕霈), discovered that out of a population of 23 million, there are close to 14 million scooters in Taiwan, and most of them are parked and unused for an average of 23 hours per day, prompting him to the idea of scooter sharing. Scooter sharing can not only reduce the idle time of unused scooters, which in turn reduce the total number of scooters needed, but by using electric scooters, reduce air and noise pollution as well. 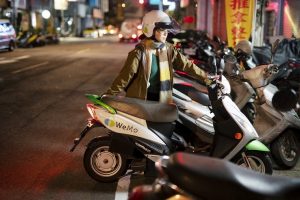 Though convenient for its users, shared vehicles can be a nuisance to non-users when they have to fight for the limited parking spaces.

In 2019, other companies such as iRent and GoShare joined the scooter-sharing market, propelling the total number of shared scooters in Taipei and New Taipei City to 10 thousand this year. Other major cities in Taiwan also started seeing shared scooters on their streets. At the same time, iRent also provides car sharing, with over 2,800 cars in service all over the island.

When using private vehicles, there is a catch — you have to drive or ride your vehicle back home. After considering the fact she could not drive after drinking, Huang Wan-ting (黃宛婷) decided to ride WeMo scooter instead of her scooter to dinner with her friends and return home via public transportation. This way, she did not have to waste another trip to retrieve her scooter. According to WeMo, one-way trips constitute 50% of its scooters' uses.

Scooters have been deep-rooted in Taiwanese culture, so the change from private scooters to shared scooters may be slow. However, the much higher cost of owning a car made the benefits of car sharing way more apparent and applicable. After selling his old car a few years ago, electrical engineer Yang Hui-jun (楊惠鈞) satisfy his occasional needs through rentals and subsequently became an active user of iRent's car-sharing service. He often uses iRent when it is raining or if he needs to fetch his family members. "I use car rental 4 to 8 times a month, the total cost is around 5 thousand dollars (US$170) monthly, summing up to 60 thousand dollars (US$2037) a year. The cost of owning a car, including depreciation, can amount to at least 100 thousand dollars (US$3395) a year. Without a car, my quality of life is also not that affected, so currently I still don’t have plans to buy a new one." analyzed Yang.

Limited Parking Spaces
That said, not everyone welcomes the idea of shared vehicles. Unlike YouBike, shared scooters did not have to park in a specific dock, but they still have to be parked in legal public parking spaces. "In Taipei, shared scooters rocketed to 10 thousand last year, and people began to feel the strain on public parking spaces," said Liao Yuan-ling (廖苑伶), division chief for the Department of Transportation in Taipei City Government. She also added that even though the cap is 20 thousand by law, it is still advisable for rental companies to slow down their placement of scooters in the city. 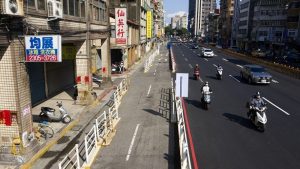 By separating traffic flows, cyclists can enjoy a safer ride while faster vehicles can have a smoother journey.

To quickly alleviate the shortage of parking spaces, WeMo seeks collaboration with private car parks. "In Taipei, the number of scooters already far surpassed the number of parking spaces anyway. In the long term, when more people use shared scooters, it will free up more parking spaces, creating a positive cycle," explained Jeffrey. "According to research done overseas, a shared scooter can effectively substitute 10 to 15 private scooters. In the future, if there are 50 thousand shared scooters, they may be able to replace 500 thousand private scooters, cutting the current amount of 900 thousand scooters in Taipei by half." Currently, one WeMo scooter can substitute 3 privately-owned, 3% usage rate scooters, or 9 scooters that are only used 1% of the time.

According to a survey done by WeMo, the distance to a personal scooter is only at a range of 10 to 50 meters; hence to replace more privately-owned scooters, shared scooters have to be able to be reached from anywhere, but also everywhere.

YouBike is also expanding its cycling network with its newest YouBike 2.0, moving the rental function from the dock onto the bike itself and aiming to increase their docking stations in Taipei from 400 stations to 2 thousand stations. "For 2.0, docking station does not require underground electric cables so they can be set up almost anywhere, allowing rentals and returns in narrow streets and even alleyways," explained Vicky.

Can Vehicle Sharing Be an Ally to Public Transportation?
The success of YouBike is due to many reasons, and Vicky believes the BOT approach, where the government funds the hardware while the contractor handles the operation, is one of the key reasons. "In other countries, many public bicycle services and public transportation use a different system whereas, in Taiwan, one card is all you need. Furthermore, YouBike docking stations are set up near public transportation so it's easier to make transfers," commented Vicky. "BOT model allows the government to be more flexible so contractors can cooperate with their plans." When the Taipei city government launched a campaign a few years back, where the first 30 minutes of YouBike ride is free if you transferred from MRT or bus, the usage rate of YouBike took flight and the number of new users soared. 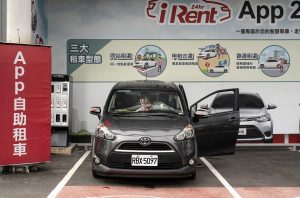 During the pandemic period, cleanliness was stepped up to provide users with clean and safe cars.

Nonetheless, many restrictions come with BOT as well. For example, contractors have to discuss pricing and docking station locations with the government. Moreover, whenever the government introduces new campaigns such as the monthly travel pass (unlimited use of Taipei Metro, city buses, light rails, and transfer to YouBike with concession rates) or elderly subsidy plans, YouBike had to adjust its system to be in line with these new policies. Vicky pointed out that, "If the contractor only wants short term profits, then it definitely cannot undertake BOT projects." Many public bicycle contractors in other cities had indeed ceased operation before their contract ended, or have fewer usage rates than YouBike.

There are many factors to consider if the idea of shared mobility is to succeed. As a long-time advocate of green transportation, Jason believes that the government should view vehicle sharing as their ally in promoting public transportation. "Vehicle sharing in itself is a type of public transportation; the government should provide the necessary infrastructure to reduce the operating costs for the service providers so they can expand the network together. For instance, reserve 20% of the parking slots for shared vehicles in new car park plans is a way to incorporate sustainability into city planning." Car sharing service provider, iRent, also believes that the successful expansion of Zipcar and Car2go overseas is due to their government's support and the integration with public transportation.

The steady growth of privately-owned vehicles meant that Taiwan still struggles to stimulate its public transportation usage, but vehicle sharing may be a possible game-changer. Government policies have to be bold and innovative to induce changes, but we must also do our part and raise our awareness of environmental sustainability. As roads, parking spaces, even clean air, etc., are all limited resources, each of our transportation choices can bring us one step closer to a safer, cleaner, and more sustainable living. 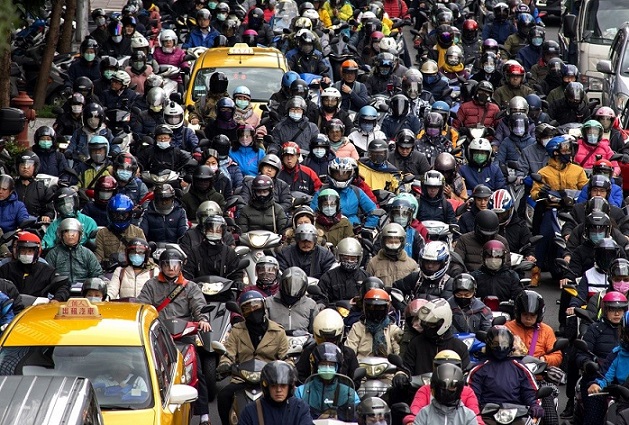 During rush hours, waves of scooters swarm the streets of Taipei. A sizeable effort has to be made if changes are to be seen.