The Impact of COVID-19 on Migrant Workers in Taiwan

The Impact of COVID-19 on Migrant Workers in Taiwan

The issue of illegal migrant workers in Taiwan resurfaced after a COVID-19 confirmed case was found to be an undocumented foreign worker. Yet, to survive the pandemic, Taiwan may have to put legal issues aside and provide all migrant workers with adequate help and medical support. 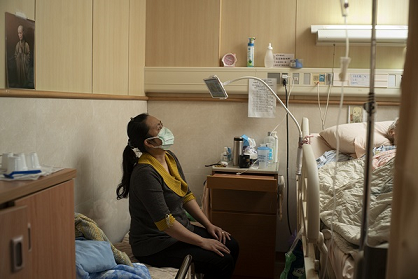 Migrant workers are an invaluable part of Taiwan's workforce, filling the gap in the local labor market.

Since 1989, Taiwan opened its doors to allow an influx of migrant workers, but high broker fees, unethical employers and inadequate laws and policies have resulted in the rise of illegal overstayers and runaways. The National Immigration Agency, the Ministry of Labor and the police force had been trying to track down these undocumented migrant workers, but their numbers are still estimated to be about 7% of the total migrant workforce, at around 50,000 people.

In February 2020, Taiwan's 32nd confirmed case of COVID-19—a caretaker who contracted the disease from her employer—was found to be an illegal migrant worker who took public transport in northern Taiwan one week before diagnosis. The case's illegal identity and movement caused public uproar in these troubled and sensitive times amid the epidemic. In response, the Ministry of Labor initially announced that a more thorough and strict investigation of undocumented migrant workers will be conducted, and the Ministry of Health and Welfare also asked medical personnel to report on caretakers who are working illegally in hospitals.

However, these measures not only increase medical personnel's workload, but will also create a void in the workforce of the medical system. So, under the directives from the Central Epidemic Command Center, the Ministry of Labor agreed to hold off the tracking down of illegal migrants working in medical or healthcare sectors, in light of the pandemic.

Illegal migrants can be found working as caretakers in hospitals and employers' homes, or in other labor-intensive sectors such as construction or agriculture. However, when migrant workers lose their legal status, they also drop out of the proper medical system. Before COVID-19 broke out, even without a valid National Health Insurance Card, they could still go to private clinics and pay for their own treatment. But now, some private clinics have closed their doors to illegal foreign workers out of fear of crackdowns from government agencies or out of fear of the virus. "Previously, my friend was able to pay for his own treatment without a valid insurance card, but now the doctor refuses to treat those without a card. My husband is also an illegal migrant worker, and he takes health supplements to avoid getting sick," said Dinda, an Indonesian migrant worker. 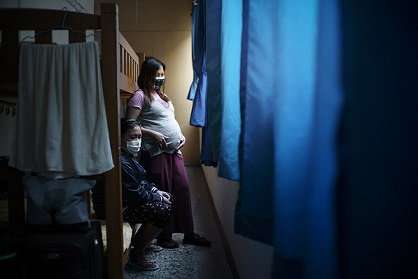 Father Tajonera operates a shelter in Taichung for migrant workers, many of whom have lost their jobs, are in the midst of changing jobs, or are unable to work due to sickness or pregnancy.

"Most migrant workers are poor, so they try to bear with their illness until it becomes very severe. For those who are staying illegally, seeing a doctor is like a 'do or die' situation," explained Father Joy Tajonera, a pastor in a Catholic church in Taichung who has been fighting for migrant workers' rights for ten plus years.

For illegal migrants, going to a hospital for medical treatment means having to risk being caught and deported, so they often rely on nonprescription drugs or simply bear with the sickness. Jaka, a migrant worker, said that if illegal migrants catch a cold, they would only buy drugs from Indonesian grocery stores instead of seeing a doctor in fear of being exposed.

Liao Ru-wen (廖如文) and Teng An-na (滕安娜), deputy directors of the nursing department in Taipei Tzu Chi Hospital, explained that the hospital doesn't check the patient's background if they don't use the National Health Insurance Card. Yet, the hospital might ask local social workers to assist in the patient's admission, which might then lead to an exposure of identity. Chun Huai Hsu (許淳淮), a foreign worker rights advocate working for Taiwan International Worker's Association, commented that he heard stories where dying migrant workers were left at the doorsteps of the emergency room by their fellows or employers.

The Challenges of Seeking Medical Help
Even with health insurance, migrant workers might still not receive proper healthcare due to various problems such as language barriers or irresponsible employers and brokers.

"My finger was broken in a work accident and it hurt like hell even after three days, but my boss still asked me to go to work," said Arif, an Indonesian migrant worker. "I felt like I was dying and I asked my boss to bring me to a doctor many times, but he always said he was too busy. In the end, I had to call the 1955 hotline (a toll-free helpline for foreign workers in Taiwan) and an ambulance was then sent for me," Neng, a Filipino migrant worker recalled. 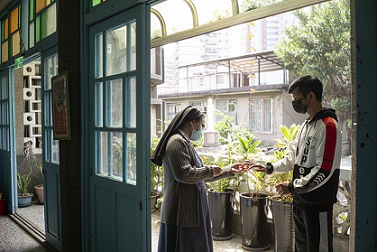 Sisters and social workers at the Migrants and Immigrants Service Center under the Hsinchu Catholic Diocese provide assistance to migrant workers in need of medical help.

In comparison to their illegal counterparts, these migrant workers are considered the lucky ones, as they know how to call for help, and have the ability to do so. "It is common to see migrant workers not recovering fully from sicknesses due to untimely or inadequate medical help," said Nie Yong-li (聶永莉), a social worker supervisor in Xinzhu. The center she serves once helped an Indonesian migrant worker who was initially diagnosed by a private clinic with inflammation of the uterus. After three months with no signs of improvement, she was referred to a hospital, where she was diagnosed with stage three cervical cancer. Having lost the opportunity for early diagnosis and treatment, she passed away soon after returning to her country. Nie added that it is common to see migrant workers trying their best to get help through the proper channels but to no avail. "We encourage them to keep trying, because there is nothing more important than staying alive." For migrant workers who have legal status and health insurance, it is already difficult for them to seek medical help, let alone illegal workers.

The Invisible Workforce
"After case 32 was exposed to be an illegal migrant worker, many caretakers working in hospitals disappeared in the next few days," said Teng and Liao. On average, these temporary caretakers only work for a few days, and it is not easy to check or validate genuine or falsified documents.

"We didn't ask the departments of health to step up efforts in reporting on undocumented migrant workers," clarified Jiang Lin (姜霖), a senior specialist in the National Immigration Agency who deals with migrant worker affairs. "We are worried that the harder we chase them, the more they hide."

The National Immigration Agency has since started to adopt a softer approach to find illegal migrants, rolling out a program that promises minimal punishment if they turn themselves in within a certain period of time. A similar program was carried out last year and received promising results, but Chun Huai Hsu was doubtful this time. "It is difficult for undocumented migrants to find work back home because most of their countries are hit harder by the pandemic compared to Taiwan," he said. "Though the program promises the removal of entry bans for those who turn themselves in, they are still banned for life from working in Taiwan and are only allowed to enter Taiwan with travel or study visas. This program will likely only attract those who already want to go back home, or those who think they can still come back to Taiwan to work."

"This program still carries the negative message of arrest and deportation," commented Father Tajonera, who suggested a gentler approach. "If you are unwell, please seek medical attention. We can help." 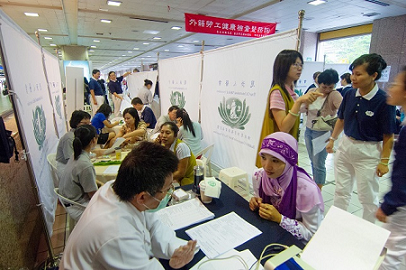 Many migrant workers are unable to see a doctor because their off days are on weekends, so Tzu Chi International Medical Association hosts free clinics on Sundays to tend to their medical needs. (Photo by Hsiao Yiu-hwa)

Organizations and scholars advocating for migrant workers' rights pushed for the following three measures: "Don't drive people out. Don't punish them. Restore their legal status." They think that these measures can bring those who are in hiding back into the system to fight the pandemic together. Yet, Paul Su (蘇裕國), deputy director of the Cross-Border Workforce Management Division under the Ministry of Labor's Workforce Development Agency, said that the situation and feelings of local workers needed to be taken into account and that a social consensus would be required to carry out these measures. So, it is still impossible to restore the legal status of all illegal migrant workers for now. "These illegal migrants are in hiding, so we are unable to reach out to them directly. Hence, we ask their home countries' representative offices, human rights groups and churches to pass on safety information about the pandemic and the offer to turn themselves in as well. In the future, we will also give out face masks through these channels."

Before the pandemic, migrant workers could go to private clinics for treatments, and some religious organizations also provide medical assistance. Sister Kitz in Xinzhu and Father Tajonera in Taichung had been helping migrant workers to meet their medical needs. "Some of the doctors I know sometimes don't charge any fees even if the patients have the National Health Insurance Card," said Sister Kitz. Tzu Chi International Medical Association (TIMA) had also been hosting free clinics for migrant workers for more than ten years, but it is currently on hold due to the pandemic. Instead of just passing on safety information on the pandemic, what migrant workers may really need is adequate help and medical support.

(In this article, some names have been changed to protect the identity of the interviewees.)