Tzu Chi's Relief Efforts Help Myanmar Get Back on Its Feet

Tzu Chi's Relief Efforts Help Myanmar Get Back on Its Feet

Torrential rains in Myanmar during July and August 2018 caused a dam to breach and multiple rivers to flood, destroying much farmland. In November, Tzu Chi gave out mung bean seeds to affected farmers. Now, the farmers are having a good harvest. 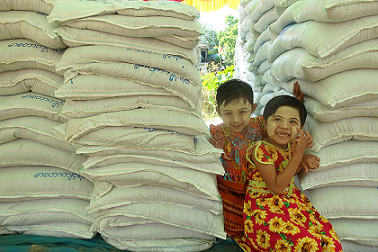 The faces of hope were seen among the mung bean seeds supplied by Tzu Chi.

Daw Tin Moe Khine, a female farmer, led us to a mung bean farm, telling us she could foresee a good harvest. “It will more or less make up for what we have lost, at last.”

Recalling the catastrophic flood, Daw’s fright resurfaced. “The flood came so fast that the water level immediately reached chest height. Fortunately, we lived in a two-storey house. We moved everything to the second floor as fast as we could.”

After the flood receded, Tzu Chi volunteers from Taiwan, Malaysia and Myanmar formed a team to survey the disaster. They departed from Yangon, travelled south to assess the situation in Mon State, and then turned north to gauge the conditions in Bago Region.

As the team visited a town called Kyaikmaraw, a farmer told them that they suffered from four deluges which destroyed all of his rice seedlings. It was the worst catastrophe he had experienced over the past 30 years.

There was also an old couple with only sadder stories to share. The husband, 83, was hunchbacked, which, according to the wife, was caused by an injury that took place when he was transplanting rice shoots. However, he stressed that there would be no “rice” on the table if they stopped rice farming, while also adding that being a farmer is his lifelong calling. 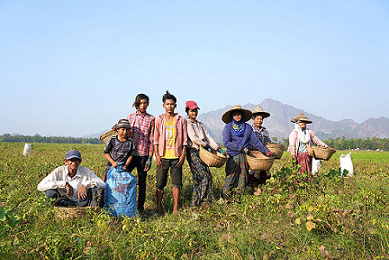 To compensate for farmers’ losses, the Myanmar government handed out half a pack of rice seeds for every acre of farming land destroyed by the floods. The hunchbacked old farmer owned three acres, so he received one and a half packs. He judged his own land to be insufficient and borrowed land from others. But since his lower back was injured, he had to hire workers to help out. A male worker's wage was around 6.63 USD per day, while a female worker’s wage was half of her male counterparts’.

When volunteers went into the old couple's kitchen, they saw only a meager amount of rice left in the rice pot. Guo Bao-yu (郭寶鈺), one of the volunteers who could speak Burmese, asked the old couple, “How many days will this amount of rice get you through?” The old lady replied, “Only about ten days.” Guo asked, “What are you going to do afterwards?” “We can eat the cookies that people gave us.” “What will you do after you eat up the cookies?” The old lady fondled a pair of golden earrings on her ears, and said she would pawn them in exchange for money to buy rice. Everyone was saddened upon hearing it. 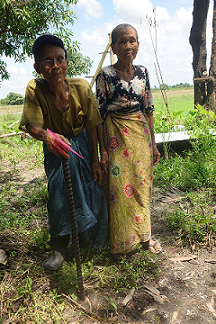 An old couple tried to make the ends meet after they survived the natural disaster.

The difficulties that the farmers faced were immediately reported to Dharma Master Cheng Yen(證嚴法師) when the volunteers returned to Taiwan. Master Cheng Yen instructed that mung bean seeds should be allotted to farmers in the most badly affected towns of Yangon and Bago to help them survive the adversities, while high quality rice seeds should be allotted to farmers in Yangon, Bago, Kayin and Mon in the following year in the hope that with a good harvest, people’s financial burden will be lightened.

Myanmar’s monsoon season runs from June to October, which is why farmers usually plant seeds during the end of May and the beginning of June in order to make use of the abundant rainwater for irrigation. If everything goes well, rice can be harvested near the end of October and early November.

Farmers usually plant bean seeds between November and February, within the nation’s dry season, as wet seasons are counterproductive for bean farming. However, in areas where water is still abundant during the dry season, farmers would still opt for rice farming. Geology, weather conditions and so on all have to be factored in to make the best choice.

But now, the climate on a global scale is in disarray. Myanmar has to endure floods as often as every one or two years. As an example, farmers had just planted rice seeds last June, and the flood came three to four times last July, with each flood lasting from ten days to half a month. Many new seedlings could not survive more than two floods, as seedlings would become rotten after they were soaked in water for too long.

Many farmers’ livelihoods were affected, as most of them usually took out a loan from the government’s agriculture department in April to cover their farming expenses. Although the annual interest rate was a mere 6.2 percent, the principal and interest had to be repaid in full in March in the following year. Failing to do so would make borrowers ineligible for requesting future loans.

As a result, when harvests failed and farmers still had to repay the debts, many of them would turn to private lenders, whose interest rates could be as high as 20 to 70 percent. As interests compounded interests, the debts became quite substantial. Some people therefore had to sell off part of their land to repay the debts. Consequently, their agricultural land shrank.

Even when harvests were good, some people had to sell them off in order to repay their debts, leaving themselves with very few or no seeds to grow in the next season. So, many rice farmers had to buy rice from the shops too, just like everyone else. They produced rice, but they did not have rice for themselves. How ironic!

In order to provide immediate flood disaster relief, Tzu Chi distributed mung bean seeds to farmers in Myanmar’s two most affected provinces. Subsequently, rice seeds were distributed to 47,000 farmers in four provinces. The total agricultural land that benefited from Tzu Chi’s relief efforts was 82,000 hectares, nearly as vast as half of Taiwan’s land area, and it is Tzu Chi’s greatest relief work to date. 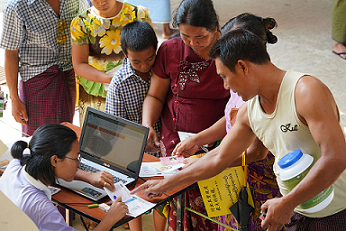 A volunteer takes down the names of seed recipients in Myanmar.

Right after Cyclone Nargis brought about one of the largest disasters to Myanmar, the country’s military government had initially rejected foreign aid. Tzu Chi’s disaster investigation team comprised nine members, all of whom were either Malaysian or Thai volunteers. Malaysia, Thailand and Myanmar had close relations, as they are all members of the Association of Southeast Asian Nations (ASEAN), which made it easier for Tzu Chi’s Malaysian and Thai volunteers to obtain visas to enter Myanmar.

At first, the team members were closely watched by Myanmar’s military government; only after several negotiations with the officials in charge of disaster relief and reconstruction did they obtain the nation’s first official relief permit, which made Tzu Chi’s ensuing relief programs possible.

After investigating the damages of the flooding in 2018, Tzu Chi intended to purchase mung bean seeds last October, only to find that most mung beans had been sold overseas; what was left over was the remaining 654 tons of beans in storage, which Tzu Chi had to allot to the worst affected 15,000 farmers.

U Kyaw Htay, one of the farmers, received five baskets of bean seeds. But thanks to insect pests, he harvested only 12 baskets per acre of farming land, which were still two baskets more than the yesteryear. He said, “Luckily, I could harvest some mung beans and earn an estimated fortune of 1,650 USD, which could be used to pay back the loans I borrowed from the agricultural department. Additionally, Tzu Chi will supply us with some rice seeds for the next season, which will help us cut back on farming expenses.” 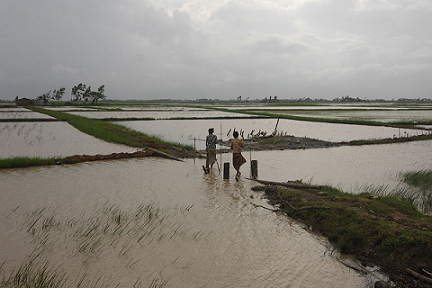 After Cyclone Nargis hammered Myanmar in 2008, plots of agricultural land were turned into ponds for more than a month.

Mentioning this, he felt deeply sorry for farmers like himself and stressed that if the government had indeed meant to improve farmers’ lives, it would have extended the repayment deadline for a few more years, instead of obligating farmers to pay off their debts within a year. Such an extension would make the loans more affordable and farmers would not have to borrow money from private lenders.

One mustn't falsely believe that the more land he has to grow crops on, the more money he will make. A family I came across is a case in point. It was a family of seven people, who had 30 acres of land to farm on. They may seem to be rich, but the truth is when they grew rice last year, their farm was flooded for two months, resulting in no harvests; then they grew beans last November, but rain poured, so any hope of harvests went out of the window as well. Two harvest failures in a year only meant that the more seeds they'd planted, the more they'd lost. It was a nightmare.

For every acre of land, they borrowed 99 USD from the government at an interest rate of 7.5 percent, payable in six months. As they harvested absolutely nothing, they owed the government 2,970 USD and private lenders 1,980 USD, making repayment nearly unthinkable.

Carrying out disaster relief in Myanmar has been a difficult endeavor. Volunteers traveled on bumpy roads in the country, with their faces besmirched with dust. When misunderstandings happened, interrogations in police stations followed. A capricious political climate means one could easily run into trouble for no good reason. Good intentions, unfortunately, do not always preclude misunderstandings.

Having been through it all, the volunteers have also seen and tasted both the sweet and the bitter. They make new friends, they help each other out, and they say goodbye when the time comes. The experience is real and the friendship is genuine. 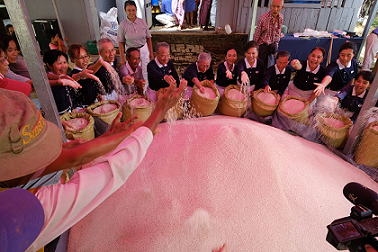 The result of saving a handful of rice a day.

Wen Su-rui (溫素蕊), who was born and raised in the country in Taoyuan, Taiwan, is one of Tzu Chi’s volunteers working in Myanmar. In her childhood in the 1960’s, she used to walk barefoot, and, at the age of two or three, had to herd five cattle. When she came to Myanmar, she found what was buried in her distant memories. She was once visiting a farming village, and when she walked out of a temple, she intentionally walked barefoot on a narrow path in the countryside. A sense of chill was sent through her from the earth under her feet. It was the bliss of heaven.

In retrospect, it may appear that when volunteers traveled to Myanmar to distribute seeds to the Burmese farmers, they were there to “give.” But in fact, givers were actually also the receivers, as the givers’ hearts were purged in the process. In a sense, the distinction between giving and receiving not only blurs, but vanishes.