"I was there when the first batch of parts are produced last year," said Cai Bo-chang (蔡泊昌). Assembling makeshift classrooms was tedious and complicated work, so Cai felt that someone had to always be around to look after things. When the second batch of makeshift classroom production began in March this year, Cai was there as well. 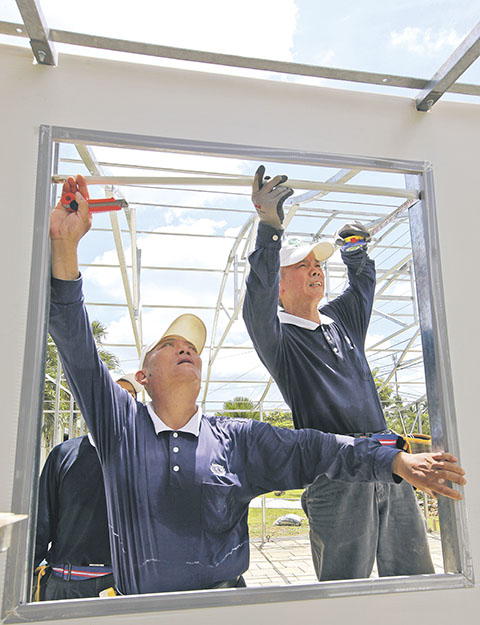 Under the passionate heat of the Philippines, Cai Bo-chang and his fellow volunteers worked and toiled every day to complete the makeshift classrooms as fast as they can. (Photo provided by Lin Yan-huang)

Not just assembling the parts in Taiwan, Cai was able to fly to the Philippines to erect the classrooms there himself. To be there in person allowed him to really understand what the victims needed. The children there needed classrooms.

Just when the second batch of makeshift classrooms was about to begin production, Cai's wife, Huang Zong-yu (黃宗玉), suddenly fell very ill. Her conditions worsened quickly and passed away in only a matter of days.

Unwavering Support
Huang was the reason why Cai was able to become a full-time Tzu Chi volunteer. When he flew to the Philippines to help construct the makeshift classrooms, she was the one who paid for his air tickets and all of his other expenses.

Years ago, when he was in jail, Cai came across a copy of Tzu Chi Monthly magazine and was deeply touched by the words of Dharma Master Cheng Yen (證嚴上人). He immediately joined Tzu Chi after being released and vowed to correct all of his bad habits. Cai also distanced himself from the bad influences in the past and closed off all his previous businesses. Seeing that he was finally set on the right path, Huang decided to shoulder all the financial responsibilities and supported Cai to be a full-time volunteer. 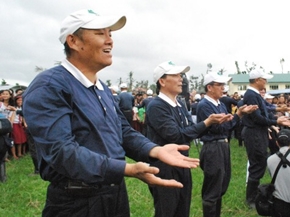 Cai Bo-chang happily interacting with the locals during the makeshift classroom's handover ceremony in the Philippines. (Photo provided by Zhang Ru-rong)

At first, people were doubtful of Cai. "How can a man in his forties not have a job, and volunteer full time?" Some believed that he was being paid by Tzu Chi. Cai proved his worth quietly, and became the director of general affairs for Tzu Chi in Taichung.

After Huang passed away, Cai's biggest regret was not having expressed his love and gratitude to his wife more. "I'm glad that I could be with her at her last moment. One minute ago, she's still alive. In the next, she's gone," said Cai. The pain taught him the impermanence and unpredictability of life.

The Love for Tzu Chi
Cai buried himself at work, assembling the makeshift classrooms. "It's impossible not to think about her. I'm just thankful to have Tzu Chi work for me to do." 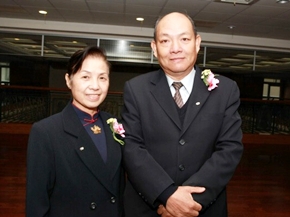 In the forty years of their marriage, Cai never brought Huang shopping. When Cai received his pension in 2010, he wanted to use the money to buy her things or take her on overseas trips. However, Huang convinced him to donate the money, so they both became Tzu Chi's honorable board members. Instead of leaving money to their children, they believed that it was better to leave them good merits, and also set an example of doing good deeds.

Cai returned to the assembly line just days after the funeral ended. That was his way of repaying his wife for her years of support. Huang had always loved Tzu Chi, and Cai decided to devote the rest of his life to do what his wife loved.