A Better Version of Myself

A Better Version of Myself 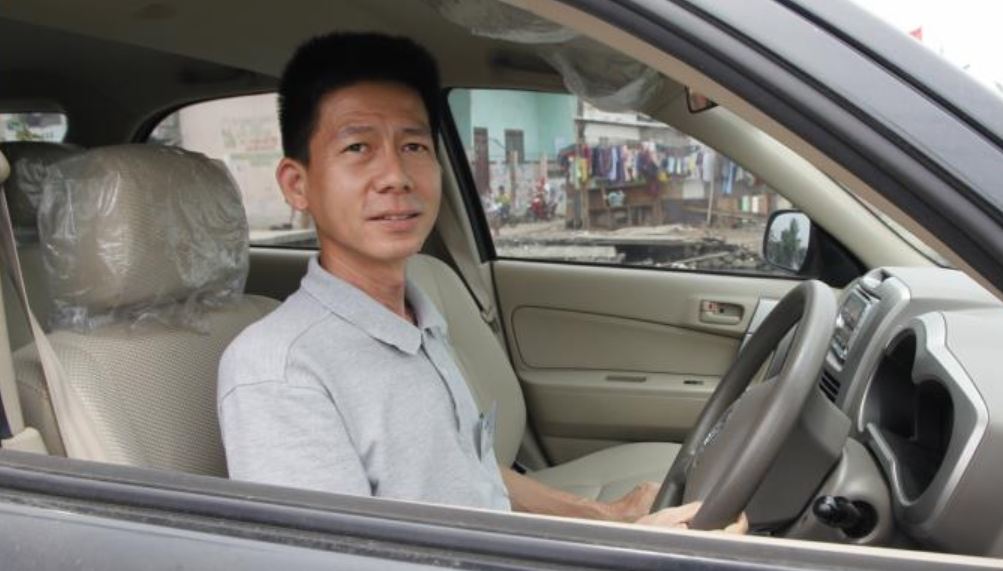 Handaya Widjaja used to be an ill-tempered gambler who often got into fights with others. (Photo by Lin Yan-huang)

Hard of hearing since the age of four, Handaya Widjaja grew up in a silent world and often suspected that others were speaking ill of him. Over time, he developed a habit of putting his defenses up, getting angry easily, and looking fierce so he wouldn't be bullied by others. "I didn't see myself as a normal person," wrote Handaya on a note. Even with a hearing aid and the ability to read lips, he still has much difficulty listening and speaking. 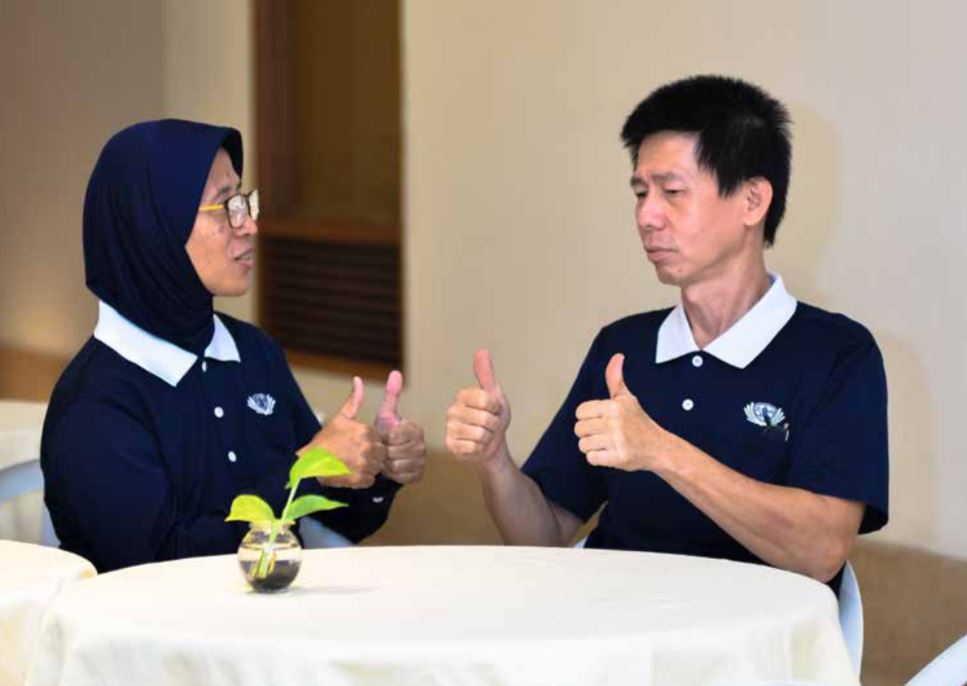 Both hard of hearing, Handaya and his wife Komariah communicate through sign language. (Photo by Arimami Suryo A.)

"When I got into fights with other people, I was never severely injured. But I did get bruises of course." Not only was he ferocious in fights, but was also aggressive in gambling. At age 21, he once won 12 million rupiah, a sum which could buy him a house at the time.

Handaya spent his youth getting into fights, gambling, drinking, and cursing, and even after marriage, he didn't change much. "He was rather gentle and considerate when we dated. But after we got married, he often got angry," said his wife Komariah, who is also hearing impaired. "Thank goodness he didn't hit me." Handaya not only got into constant arguments with his wife, but also lost his temper easily with his in-laws and anyone who disagreed with him.

In 2010, Handaya and his wife came across DAAI TV on the television one day, and became a loyal audience ever since. As most TV programs do not have subtitles, the couple with hearing problems couldn't follow what was going on in the shows. But several programs on DAAI TV had subtitles, including drama of real-life stories produced by Da Ai TV from Taiwan, which the couple greatly enjoyed watching. 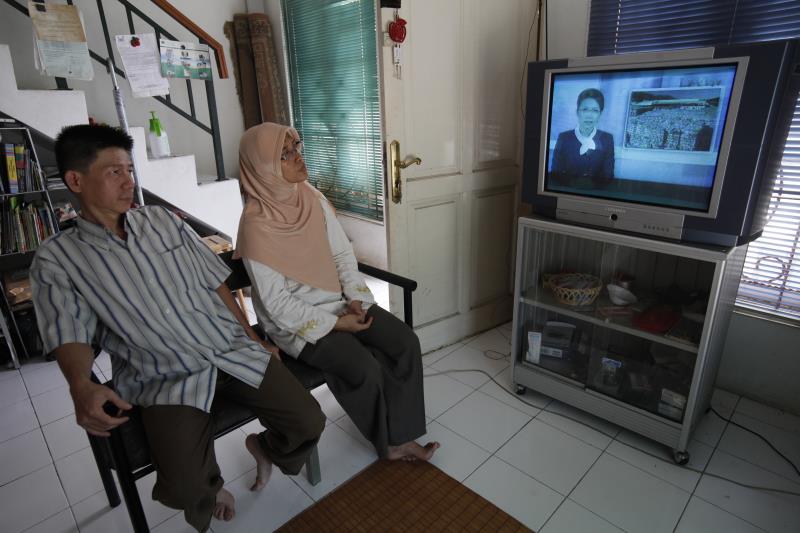 "I had many realizations after watching Da Ai Drama. Once, there was a protagonist who was a gambler. Even when he was sick to the point that his hands were shaking, he still went gambling!" recalled Handaya. The gambler's real-life story was like a wake-up call to him. "I thought, if I continue with my old ways, I'll end up like him." 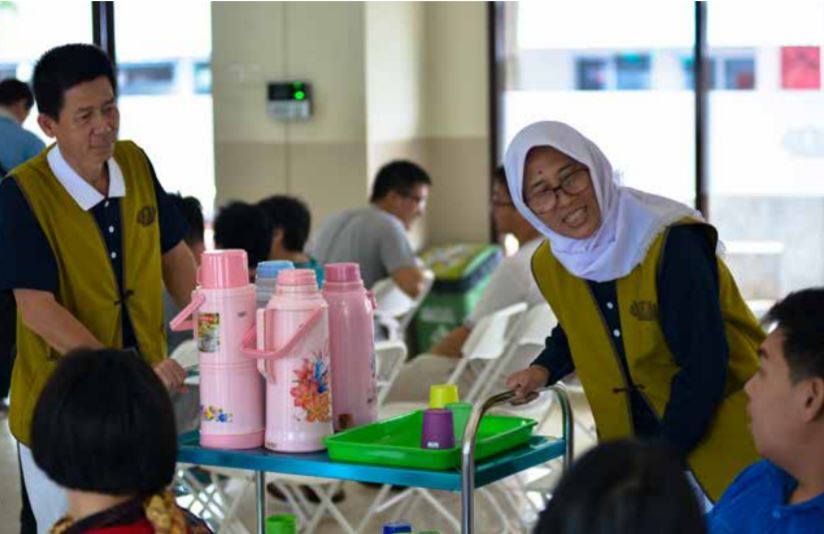 Handaya and Komariah prepare hot tea, coffee, and drinks for patients and their family at the Tzu Chi Hospital in West Jakarta. (Photo by Anand Yahya)

Handaya also watches Dharma Master Cheng Yen's talks on DAAI TV, and was moved by the Master to make donations to his fellow countrymen affected by disasters. Eventually, he was inspired to serve with Tzu Chi as a volunteer, and after learning more about Tzu Chi's work, he even asked his wife to join him too. Komariah, who is a Muslim, was at first reluctant, but after Handaya explained to her that Tzu Chi helps those in need, she started to take part in Tzu Chi's work too.

Together, Handaya and his wife volunteer at a Tzu Chi Hospital, bring care to people in nursing homes, make home visits to those in need, and do recycling work to protect the environment. Handaya is now much happier than his younger self, feels more satisfied with his own life, and enjoys a harmonious relationship with his wife and in-laws, whom he regards as his own parents. He has reinvented his life and created a better version of himself. 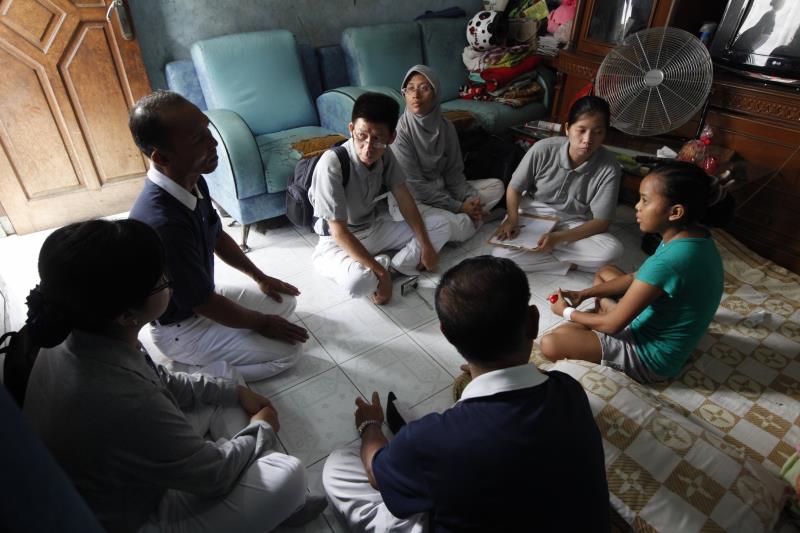 At a home visit with fellow Tzu Chi volunteers, Handaya and Komariah learn how to bring support for Tzu Chi's care recipients. (Photo by Lin Yan-huang)