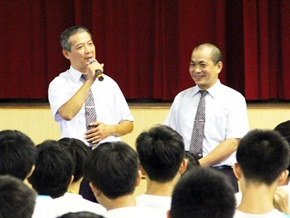 Cai Tian-sheng (left) visits schools and prisons around Taiwan to tell his story in hopes to inspire those on the wrong path in life to reform. (Photo by Lu Kun-quan)

During his childhood, Cai Tian-sheng from Taiwan was a well-behaved child who was clever and excelled in his studies. In addition, he was also the class president and had even received an award from a county magistrate for outstanding performance. So, why exactly did he end up in prison later on in life? The truth was that a poor choice in friends during middle school combined with him being over-confident in his self-control led to his drug addiction. Believing that trying a small amount of drugs out of curiosity would be harmless, he got addicted almost instantly. From then on, while his parents worked hard to make a living, he was busy taking drugs and stealing money to buy more. Eventually, he even became a drug dealer.

After having gotten away with his crimes for years, he was finally caught in 1998. However, in a desperate attempt to evade a heavy penalty, he firmly denied all accusations of drug trafficking. Then, one night, while he was locked up in a detention center, he woke up after having a nightmare and couldn't go back to sleep. Incidentally, he picked up a book titled Liao-Fan's Four Lessons, which spoke on the laws of life. That was his very first encounter with the Dharma. After reading it over and over again, he realized that the only way to change his fate was by accumulating good karma. On top of that, after coming across some Jing Si aphorisms in a Tzu Chi Monthly magazine, he asked himself why he was unable to follow the teachings, which appeared to be simple enough.

From then on, he started to copy Jing Si Aphorisms by hand, and the more he'd copied, the deeper touched by the teachings he was. From this process, he learned that rather than changing his personality, he ought to change his habitual tendencies. So, when he was sentenced to life imprisonment later on, he admitted his crimes and sincerely repented from the bottom of his heart. Seeing his changes, the judge ultimately sentenced him to eight years in prison. 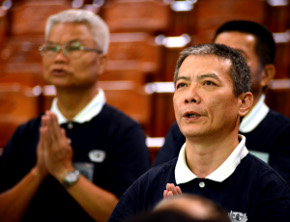 One day, when his parents visited him in prison, he learned that his mother, who had undergone three spinal surgeries in the past, had recently fallen down the stairs. Yet, she still went to visit him although she could barely stand. When asked the reason behind her insistence to visit, his mother responded, "I wish to see my precious son!"

Hearing this, Cai couldn't help but break down in tears. He asked himself, "Why must I hurt my parents like this?" He then vowed that when he gets out of prison, he will become a changed man and be filial to his parents.

Granted parole for good behavior, Cai felt as if he were ascending to heaven from the wraths of hell. Not long after he was released, Cai paced outside Tzu Chi's office in Taichung, Taiwan hesitantly before he finally mustered up the courage to make a call to the information desk.

He asked, "I was once jailed for drug dealing. Can I still join Tzu Chi?" Upon hearing the assuring response from the volunteer who answered his phone call, not only was Cai Tian-sheng ecstatic, he was also deeply relieved. He then agreed to take his first step into volunteer work by taking part in recycling work upon the volunteer's advice. 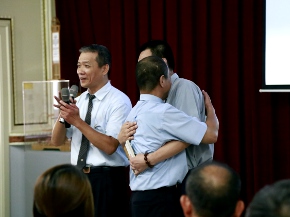 After an inmate shares his thoughts upon the invitation of Cai Tian-sheng (left), he is embraced and encouraged by a Tzu Chi volunteer. (Photo by Luo Ming-dao)

After becoming a Tzu Chi volunteer, Cai vowed to inspire and encourage more former inmates who'd wished to reform, like himself, to walk the path of goodness.

In merely five years, he had approached nearly a hundred drug users. It was not always easy for Cai to handle the stress and pressure from assisting and guiding them, but he'd remind himself about how Dharma Master Cheng Yen is constantly under stress much greater than his, and he'd feel uplifted.

As a reborn man, he now helps former inmates to reform and return to society by inspiring them with Dharma Master Cheng Yen's teachings. It is his ultimate wish that more people like him can have a bright future ahead of them after they are released from prison.