From Ordinary to Extraordinary

From Ordinary to Extraordinary 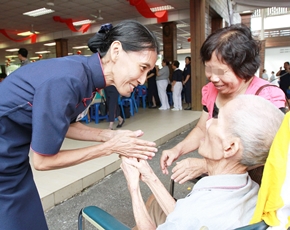 Ang See Chim (洪書珍) is a Tzu Chi volunteer in Malaysia. She works six days a week and is only off work on Sundays. Even so, she spends every Sunday taking part in various Tzu Chi activities, as this is how she unwinds after working for six days in a row.

Before she joined Tzu Chi, she used to go to her elder sister's home on Sundays to help with doing housework there. Back then, she considered herself to be introverted and clumsy with words, and she didn't know how to drive. As she'd only finished elementary school, she believed that she didn't have any professional skills and this was how she was going to spend the rest of her life.

Then, one day, she read a Tzu Chi Monthly magazine in a bookstore and was deeply moved. Later, she obtained tape recordings of Dharma Master Cheng Yen's (證嚴法師) talks and a copy of Jing Si Aphorisms from a vegetarian restaurant. From then on, whenever she felt frustrated, lost, or depressed, she would listen to those tape recordings or read Jing Si Aphorisms to regain inner peace.

Although she was interested in joining Tzu Chi, she presumed that she wasn't capable of being a good volunteer. Then, in September 2002, she attended an anniversary event of Tzu Chi Malaysia. During that event, she saw a performance by Tzu Chi volunteers that explained how doing recycling could turn recyclables into money, which could in turn be used to support good causes. That was a pleasant surprise to her, as sorting recyclables wasn't difficult and was something that even she could do. So, she became a recycling volunteer of Tzu Chi. 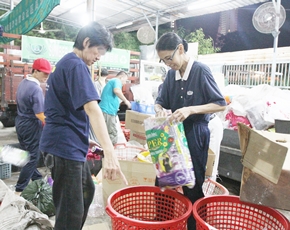 A care recipient called A Lee (left) became a recycling volunteer after Ang See Chim (right) invited her to do recycling with her.

From then on, Ang See Chim took part in Tzu Chi's activities whenever possible. She also learned to do new things, such as speaking Bahasa Melayu and writing reports after visiting care recipients. In addition, she took up many roles and her fellow volunteers trusted her as she was very responsible with her jobs.

Not only did she join Tzu Chi, she also encourages others to do the same. For example, in the past, Chong Ai Ching (章愛珍) used to stay home all day after retiring, but after approaching Tzu Chi's recycling volunteers out of curiosity once, she was invited by Ang See Chim to join them. After a few encounters, Chong accepted Ang's invitation and became a Tzu Chi volunteer. A care recipient called A Lee (阿莉) also became a recycling volunteer out of her gratitude for the help she'd received from Ang See Chim and other Tzu Chi volunteers and her wish to repay them.

Unfortunately, in April 2016, Ang See Chim was diagnosed with bladder cancer. At first, she was shocked, but she quickly regained her composure and decided to face it calmly. She was then hospitalized and received surgery. During her recovery from the surgery, her fellow volunteers and care recipients visited her, cooked for her and took care of her, which touched her deeply. After the surgery, as her doctor had declared that she didn't require chemotherapy, she immediately resumed visiting care recipients. 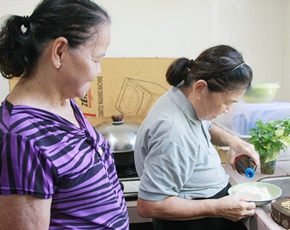 Two Tzu Chi volunteers worked together to prepare food for Ang See Chim when she was recovering from her surgery.

Dharma Master Cheng Yen once said, "We do not have ownership of our life, only the privilege of using it." Initially, Ang See Chim didn't understand the meaning of these words, but after her experiences of serving in a free clinic of Tzu Chi, visiting people in need, and being diagnosed with cancer, she gradually realized the wisdom hidden in those words: We don't know how long we can live, but we can always seize the present moment to do what we can. After that, we should just let go and focus on whatever needs to be done next.