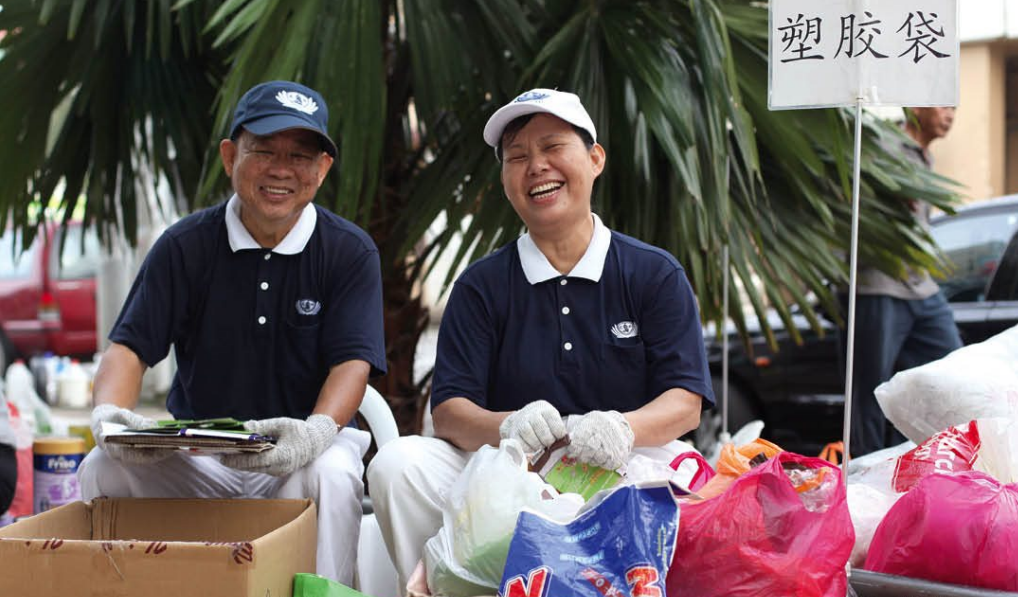 In the eyes of his wife, Lee Chin Cheng is now the perfect husband and father to their children. (Photo by Leong Chian Yee)

For a kid who grew up in a rural village, entertainment usually revolved around catching birds, fishing, and gambling. Lee Chin Cheng (李振清) had been fishing since he was a child and owned more than twenty fishing rods and various types of equipment. He said that no matter how difficult it was, he could always get the fish to bite.

His family added that he would go anywhere to fish, even to a fishing spot far away. He would pitch a tent and simply stay overnight. Once, he brought home more than 200 fishes, so his wife, Chiah Guat Bee (謝月美), became the "murderer" for all those fishes.

When people tried to persuade him to stop, he would reply, "You can ask me to do anything, but just not to quit fishing." Lee's obsession with fishing sparked many heated quarrels at home, and his family members had to put up with his bad temper.

"He would chew us out in public, even when we were still little kids back then," recalled Yi Qin (奕勤), Lee's second son. "Be it at home or the food stall, he would vent his anger on mom suddenly for no reason," added Yi Hong (益宏), Lee's eldest son.

"He slowly took to doing recycling work, but still had to go fishing once a week," said Chiah. When a series of floods hit Malaysia in 2006, Lee served as a Tzu Chi volunteer and was very touched by the relief efforts. He then started to join his wife in collecting recyclables in their food stall. To learn more about Tzu Chi, Lee installed Da Ai TV at home and the food stall the following year.

The teachings from Dharma Master Cheng Yen (證嚴上人) on Da Ai TV were like a wake-up call to Lee. "All beings have life. I didn't understand that before. I fish simply for my leisure…" Lee repented his past and decided to quit fishing once and for all.

"Once, his friends invited him to go fishing and we were very worried that he would break his vow. In the end, he came back with two big bags of recyclables. While his friends were fishing, he was going around picking up recyclables." Lee said that once he had decided to change, he would no longer be tempted. 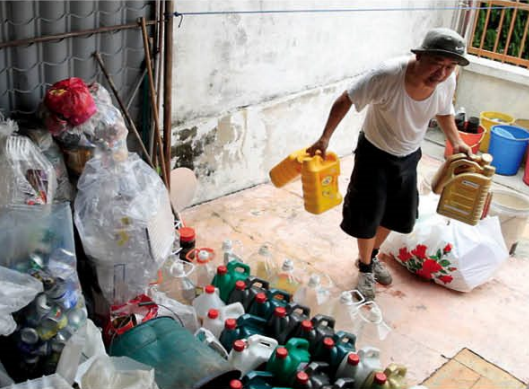 Lee Chin Cheng makes good use of the space in front of his house to sort recyclables. (Photo by Wee Fey Hau)

Harboring A Gentle Heart
Whenever Lee saw scenes of disasters on Da Ai TV, or when singing "Prayer," he would always wipe away his tears in secret. After joining Tzu Chi and repented his wrongdoings, he was like a changed man and had become more sentimental.

"He had short temper, and we were all afraid of him. I did not even dare to do Tzu Chi work in front of him at first. Now, he's the one who invites me for volunteer activities instead," said Chiah.

Their food stall became a place for them to not only make a living but also promote Tzu Chi and collect recyclables. However, Chiah began to feel ashamed when she prepared meat dishes while listening to Master's teachings. They decided to change their food stall of 20 years to a vegetarian stall instead.

"It felt weird. We are Tzu Chi volunteers, how can we still sell meat dishes? However, after changing to a vegetarian stall, we had no business in the first six months. Sometimes we couldn't even cover the cost," said Lee. Chiah was disheartened and had doubts, but Master's words gave her strength to persevere. Gradually, her regulars returned and even praised her vegetarian dishes. 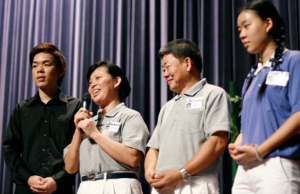 In 2008, the Lee family went on stage to share with others how Tzu Chi helped them bond closer together. (Photo by Sam Pin Fook)

"They really had fewer customers at first. But the customers slowly returned because her cooking is good," said one of their customers.

In 2011, Chiah had an accident and could no longer stand for long, so they decided to close up shop and became full-time volunteers. After training, Lee became a Tzu Cheng member and Chiah became a Tzu Chi commissioner. They have vowed to continue promoting vegetarianism and encouraging more people to watch Da Ai TV and give with love.