Abridged and translated by Rosalind Chang (張薰云)
May 9, 2019

Abridged and translated by Rosalind Chang (張薰云)
May 9, 2019 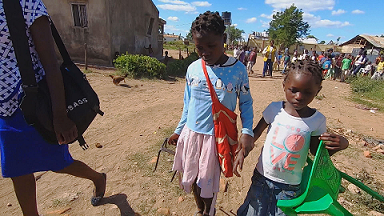 Maria walks home with her younger sister after school. 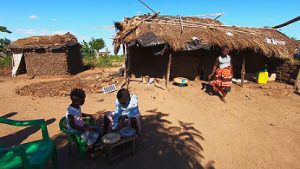 Maria and her younger sister sit in front of their home.

The route from her school to her home was not an easy one to take, as there were only sand and gravel paths along the way. Her home was a messy and tiny one, with damaged walls temporarily covered up with plastic sheets. The damage left by the cyclone is still visible.

Her family originally consisted of her father, mother and seven children. On the day the floods came, the water reached chest-high. A neighbor and her mother grabbed Maria, her nine-year-old sister, and her six-year-old brother. Her father held tightly onto his four other children, but as he choked on the water and gradually suffocated, he and the other children were washed further and further away and drowned. 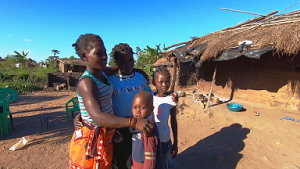 The grief from losing their loved ones is still written over Maria and her mother's faces, but for the sake of her children, Maria's mother will try her best to sell tomatoes and onions so that she can buy books and shoes for her children. Maria also told Tzu Chi volunteers her wish, which is to study hard, become a teacher, and help her mother out.

Indeed, only education can change one's life. Therefore, Tzu Chi volunteers are currently looking at ways to rebuild schools that were damaged by Cyclone Idai in Mozambique so that the local children can have a safe environment to study in.