"Our distribution event today (April 7, 2019) began with Mozambique's national anthem, following the local custom and tradition." This comment by Tim Lu (呂宗翰), a staff from Tzu Chi Foundation Headquarters, pointed out the respect for the local culture that is characteristic of Tzu Chi's international relief work around the world. 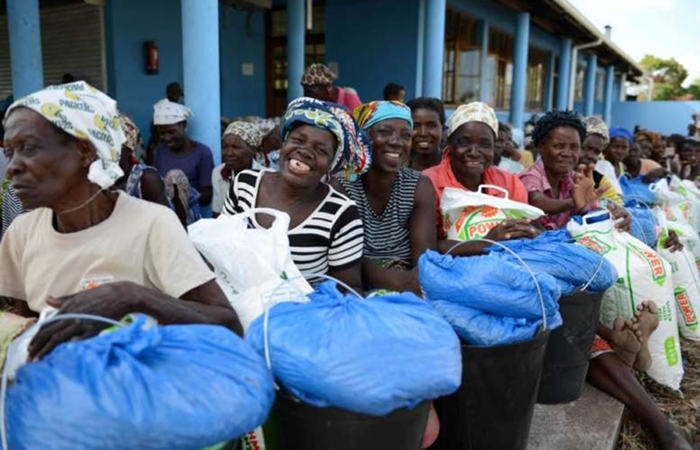 Idai survivors from Nhamatanda village in Mozambique smiled with joy as they received relief supplies from Tzu Chi.

In Mozambique, by the end of March, Tzu Chi volunteers had already provided aid to the severely hit districts of Dombe and Dondo. To assist in the storage and transportation of disaster relief supplies for further distributions from April 7 to April 9, local volunteers stayed in Nhamatanda District, about 100 kilometers from the city of Beira, where a temporary center for storing relief supplies had been set up for its central location to the affected areas. 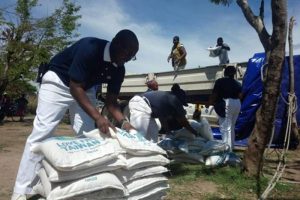 Local volunteers in Mozambique prepared bags of rice from Taiwan for distribution.

For the disaster relief, CJ Smart Cargo International had offered help by providing storage and vehicles to transport relief supplies to the disaster zones. A local official in Nhamatanda also gave his support by offering his office and even his residence for Tzu Chi volunteers to use and stay. Local volunteers from the capital Maputo were very appreciative of this assistance that gave them much convenience to effectively plan and execute the relief work.

During the distribution event at Nhamatanda village on April 7, local Tzu Chi volunteer Luisa Shulo presented Dharma Master Cheng Yen’s message in the local language, conveying the Master’s condolences and encouragement to each of the disaster victims. Through the message, the disaster survivors also learned that the relief supplies came from the love and selfless giving of people around the world. Upon hearing this, many were moved to tears.

At the distribution event, in addition to the local volunteers from Mozambique, Tzu Chi volunteers from China, South Africa, Taiwan, and the United States were also present to personally hand out the supplies. Each affected household received rice, beans, corn flour, as well as salt, cooking oil, soap, mosquito nets, water purification agent, and other daily necessities. 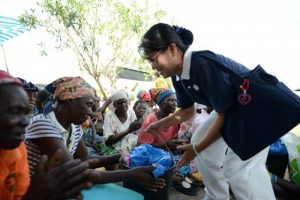 Tzu Chi volunteers personally handed the supplies to the villagers.

Feeling for the locals' suffering in this devastating disaster, Tzu Chi volunteers quickly organized large-scale distributions so the survivors could receive aid at the earliest opportunity. From April 7 to April 9, Tzu Chi volunteers provided relief aid to a total of 2,269 households in the villages of Nhamatanda, Tica, and Lamego.

With love gathered from around the globe, it has been possible to bring relief to Mozambique's worst-hit areas. Tzu Chi hopes that its support can provide enough food for the survivors and help them on their road to recovery.