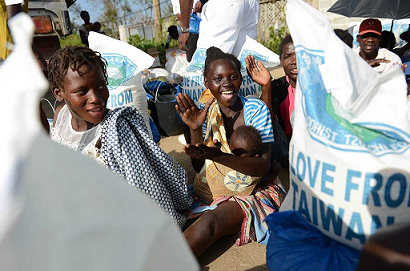 Tzu Chi volunteers surveyed the damage brought to Malawi, Mozambique and Zimbabwe by Cyclone Idai in March, and began to provide emergency relief.

Due to the widespread destruction that Cyclone Idai has brought to east Africa, people in the affected areas are now in urgent need of food, clean water, safe shelter and medication, etc. Local Tzu Chi volunteers in Africa began with disaster relief work in Malawi, Mozambique and Zimbabwe on March 11, giving out rice from the Taiwanese government, blankets, supply packages, water purification liquid, mosquito nets and medication, etc. More supplies from Tzu Chi's branches all over the world are being shipped to Africa to help the disaster victims get back on their feet and rebuild their homes as soon as possible.

According to the United Nations Office for the Coordination of Humanitarian Affairs (OCHA) and the National Institute for Disaster Management of Mozambique (INGC), as of March 2019, Cyclone Idai has possibly affected millions of people and the death toll is still on the rise, along with the estimated damages caused. Yet, in addition to a shortage of food, clean water and shelter, a cholera outbreak has also hit Mozambique. 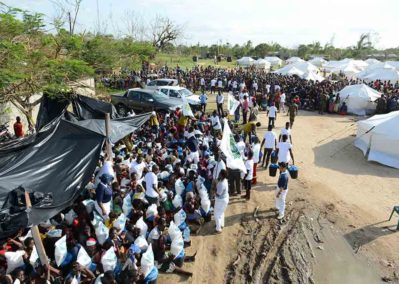 In Ching’ombe, a town in Malawi, Tzu Chi volunteers have given out cornmeal and also begun to repair damaged houses. In Mozambique, after Cyclone Idai caused great devastation, Tzu Chi volunteers travelled 1,000 km to Beira, a city which was ravaged by the storm, to survey the disaster areas. In the disaster areas, both crop fields and civilian homes were inundated by flood water. There, Tzu Chi volunteers witnessed that in a shelter for those who were displaced, people had to share one cup of beans among them. That is, a single cup of beans was cooked into a very thin soup, and was then shared amongst 44 people. That was all they had to eat for the entire day, each day.

In Zimbabwe, bridges were destroyed by flooding and landslides buried entire villages. Those who survived trod on the temporary wooden bridges in their bare feet, returning to their villages to search for their family members. A survivor told Tzu Chi volunteers that even if all he could find were the bodies of his family members, he still wished to give them a proper burial so they can rest in peace.

Local Tzu Chi volunteers in Africa have been giving out daily necessities such as rice, cornmeal, cooking oil, beans, blankets, water purification liquid and toiletries in Mozambique and Zimbabwe. The people in the town of Dombé, Mozambique, who were isolated due to the damages caused, expressed that Tzu Chi was the first NGO to reach them after the disaster hit.

At the end of March, Tzu Chi gave out supplies such as food, blankets, water purification liquid, cleaning supplies and mosquito nets, etc., in Mozambique. In view of the increasing cases of cholera that have been reported in the disaster areas and the malaria epidemic that is expected, not only clean drinking water but also a clean, healthy environment are urgently required to curb the spread of diseases. 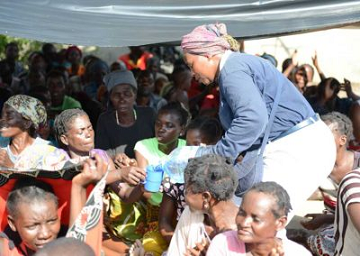 Staff from Tzu Chi Foundation's headquarters in Hualien, Taiwan, also set out to Africa on April 2 to join local Tzu Chi volunteers in Africa in continuing with the disaster aid and also to survey the needs of the disaster survivors. Even though the trail of disaster in Africa is over 2,000 km, Tzu Chi volunteers will continue to care for and support the survivors, and at the same time make plans for mid- and long-term relief.