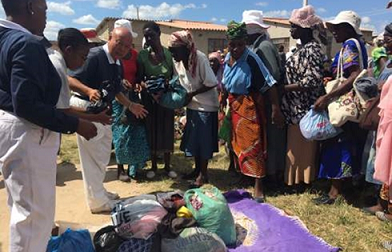 After Cyclone Idai wreaked havoc on Zimbabwe, Tzu Chi volunteers brought blankets, bread and clean water to Chimanimani, the most devastated region, on March 22, and distributed them to the refugees, while surveying the devastation before returning to Harare, the capital, where they held online meetings with Tzu Chi’s headquarters in Hualien, Taiwan. The volunteers then launched fundraising campaigns in Zimbabwe and prepared to carry out subsequent disaster relief on April 5.

Decades ago, economic sanctions were imposed on Zimbabwe as a result of Zimbabwe’s implementation of certain policies. Adversity soon ensued. Inflation put the public’s livelihood on the edge. The young were most seriously affected, as nine out of ten of the country’s young labor force were unemployed, and had no choice but to seek job opportunities in foreign countries. Currently, more than three million Zimbabwean nationals are working in South Africa.

Tzu Chi's outreach to Zimbabwe began in 2007. After learning about Tzu Chi’s work, Zhu Jin-cai, a Taiwanese businessman, became one of Tzu Chi's first volunteers in Zimbabwe. Zhu has since led local volunteers to many communities to help the poor and promoted the “bamboo bank,” which is a saving practice similar to the piggy bank but prioritizes spiritual enrichment over financial enrichment. 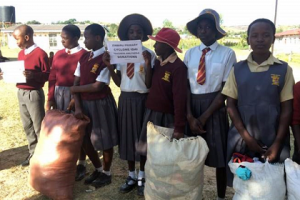 Zimbiri Primary students responded to the call for help.

In order to begin the relief work, local volunteers arrived at Domboshava on April 1, where fundraising events were held. For the past six years, Tzu Chi volunteers have visited the poor, cared for those in need, and set up a rehabilitation center for the disabled. Their hard work has earned the trust of the people.

As soon as the Zimbabweans knew that Tzu Chi volunteers would visit the devastated regions, they rushed to the fundraising events. Zimbiri Primary School principal and students also answered the call by donating supplies, hoping that their love would reach the victims through Tzu Chi’s relief efforts.

On the eve of April 2, the day before they revisited the affected areas, Tzu Chi volunteers held a fundraising event in Eastview. 800 people turned up to send their blessings. 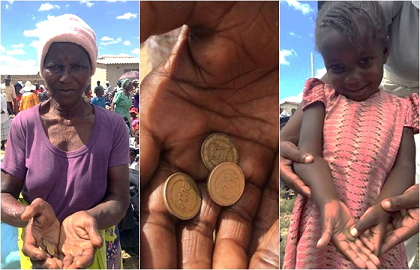 Young and old alike, those who attended the fundraising event gave what they could to help those affected by Cyclone Idai.

A 78 year-old woman who lives alone and is jobless donated nearly all she had, which is roughly equivalent to 0.3 USD, and said, “When I learned of the news, my heart was broken and I was in tears. So, here are some clothes of mine and some money, with which I wish to send the victims my blessings.”

A three-year-old girl also contributed an equivalent of 0.05 USD. Her mother has been out of a job because of her eye disease, and she has depended upon Tzu Chi to supply them with meals as she has to raise two kids on her own. Nonetheless, she attended the fundraising event with her kids to send their love. The mother said, “I am poor beyond measure, but I still want to show that I care. I am sure if I run into trouble in the future, people will do the same for me.”

Love from the community, regardless of its quantity in form, brought about numerous used clothes and a fundraising figure equivalent to 28 USD, which shows that what is truly priceless in the world is the love in the heart.