A Safety Net for the Homeless

A Safety Net for the Homeless

Street people, living a vagrant, uncertain life, may not even know they are ill. Members of the Tzu Chi International Medical Association reach out to offer medical consultation for such people.

One person after another, curled up under comforters, could just be made out in a darkened corner of Taichung Station in central Taiwan. They ranged in age from 30 to 80. Regular meals were a luxury. The challenges of cold weather when winter set in made life even more difficult for them.

At 8:00 p.m. on December 26, 2021, a group of nearly 50 people set out to visit popular gathering places for the homeless at Taichung Station and in nearby areas. Their mission was to extend care to people living on the fringe of society. The party consisted of members of the Tzu Chi International Medical Association (TIMA), other Tzu Chi volunteers, and people from the Taichung City Association for the Homeless. They were bringing hot food, hand warmers, and other items that could help keep the street people warm.

When they entered an underpass near Taiwan Boulevard and Minquan Road, they saw one berth after another, some already occupied, others waiting for their owners to return. People already in their "homes" looked at the group of people as they approached.

Dr. Ji Bang-jie (紀邦杰), 75, bent down and crouched next to Mr. Wang, 46. "Have you had dinner?" the doctor asked. "Not yet," Mr. Wang answered. A volunteer immediately brought him a bowl of hot rice noodle soup.

Wang hails from southern Taiwan, but now holds a job in Taichung City's Social Affairs Bureau. He works there during the day, and only returns to the underpass at night.

Dr. Ji asked him, "How long have you been in Taichung?" "More than a year," came the reply.

The doctor asked nurse Ye Hui-fen (葉慧芬) to take Wang's blood pressure. The reading was 182 over 102. Everyone was shocked by the numbers, even Wang himself. He opened his eyes wide in surprise.

"You do not feel unwell at all?" asked the doctor.

"No," Wang said. "The only problem I'm experiencing is difficulty falling asleep at night."

The nurse went on to check Wang's blood sugar. His number was again staggeringly high: 404 mg/dl.

A volunteer quickly told Wang that the Zenan Homeless Social Welfare Foundation, working with TIMA doctors, offers free medical services on the third Saturday of every month, from two to four p.m. After seeking medical attention there, a patient could take his referral slip and have his prescription filled for free at any clinic or hospital. The volunteer told Wang he could also go to the clinic run by Dr. Ji, who would not charge them anything.

Dr. Ji, who has long done what he can to care for the underprivileged in society, stood back up with a volunteer's help. He then said with a sigh: "They don't even know they are ill." This short comment summed up how much his heart went out to the homeless.

Following close behind Dr. Ji was He Zhi-cheng (何志成), chairman of the Taichung City Association for the Homeless. If needed, he used the flashlight of his smartphone to provide light so that it would be easier for Dr. Ji to see a patient. The chairman explained that his association provides breakfast and lunch for the homeless. They also distribute sleeping bags and winter clothing to the homeless. He thanked Tzu Chi, their long-standing partner, for providing medical services to street people. 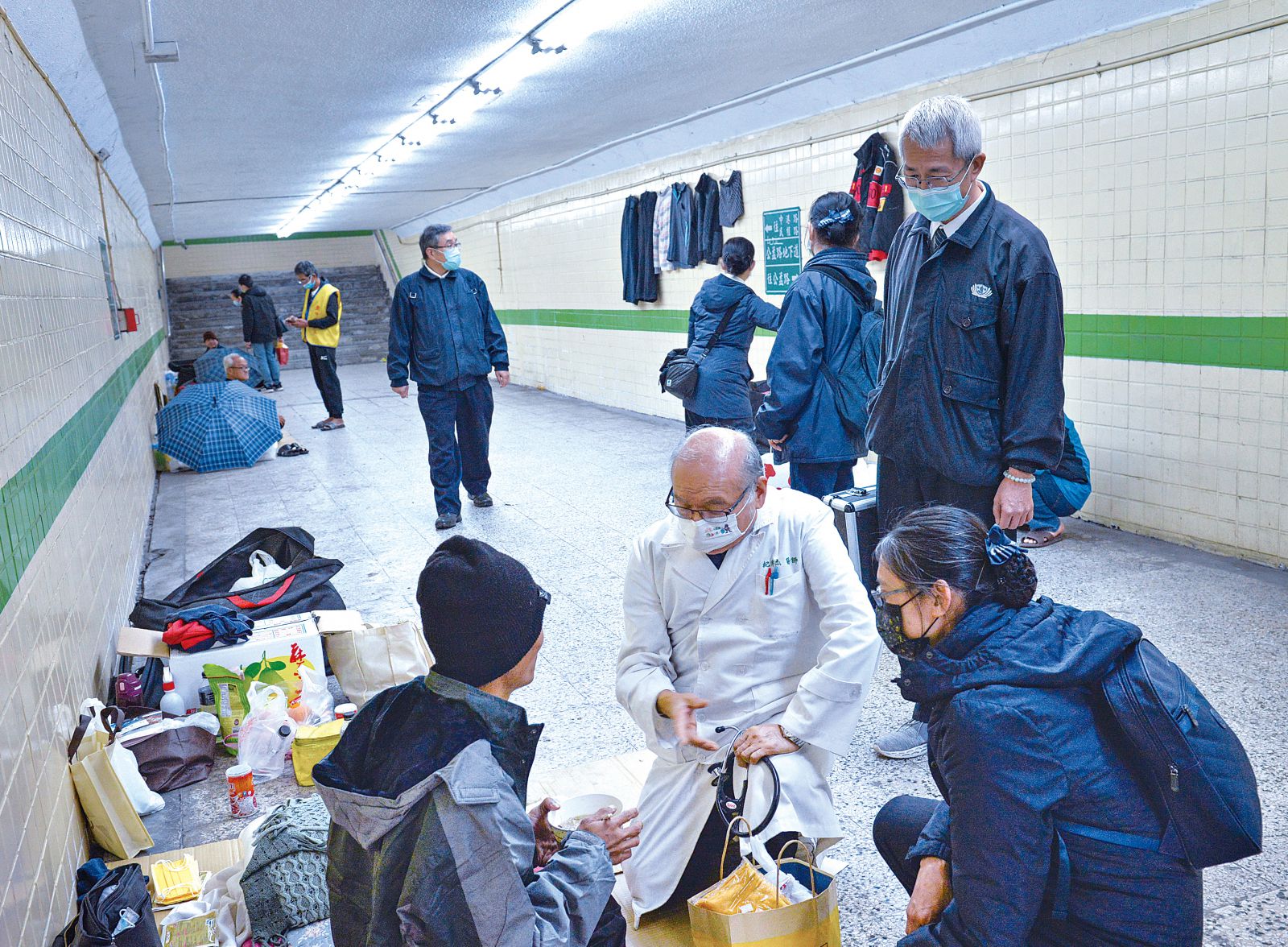 Dr. Ji Bang-jie, a TIMA volunteer, serves a street person in an underpass.

Volunteers moved on to a building near Zhongshan Park. A street person was ensconced next to each large pillar in the arcade of the building. The volunteers offered items to keep them warm. A few street people declined the supplies. They said they already had enough stuff to help them stay warm, and that if they accepted more, they wouldn't be able to take everything with them. It turns out that every morning when day breaks, they have to take all their personal belongings and leave the arcade. Anything they leave behind will be confiscated and disposed of by the city's sanitation workers.

Dr. Lin Chung-yi (林忠義), from Taichung Tzu Chi Hospital, knelt next to Mr. Huang, warmly asking if he had any health issues. The doctor often visits the homeless with his colleagues at the end of the year. "No," Huang said in response to the physician's question. "I'm over 80. Even if anything is wrong with me, I wouldn't mind."

Dr. Lin reached out to the older man's arm, to feel if the clothes he was wearing were thick enough. "Are you wearing enough to keep you warm?" he asked. "Yes," the man replied. "It's cold," the doctor continued. "Take good care. My best wishes to you." Holding his stethoscope, he moved on to the next street person, his white coat standing out in the dim light.

Two Vietnamese women were also in the group visiting the homeless: Chen Shi Hong and Tao Yu Qiu (transliterated from their Chinese names). The two had settled in Taiwan after marrying men on the island. For two years now, they have been distributing vegetarian boxed meals every Tuesday and Saturday evenings to the homeless. They give out about 70 meals each time. They had joined Tzu Chi volunteers for the event on this night at the invitation of a friend. Seeing so many people working together for the homeless, Chen Shi Hong said, "I'm moved by the love of everyone. I hope I can join Tzu Chi too."

The event that day lasted 3 hours and came to a close at 11 p.m., but Tzu Chi will continue to provide medical help for the homeless and distribute goods to them on major holidays. The compassionate work of Tzu Chi volunteers and others will help those on the margins of society navigate the uncertain times in their lives. 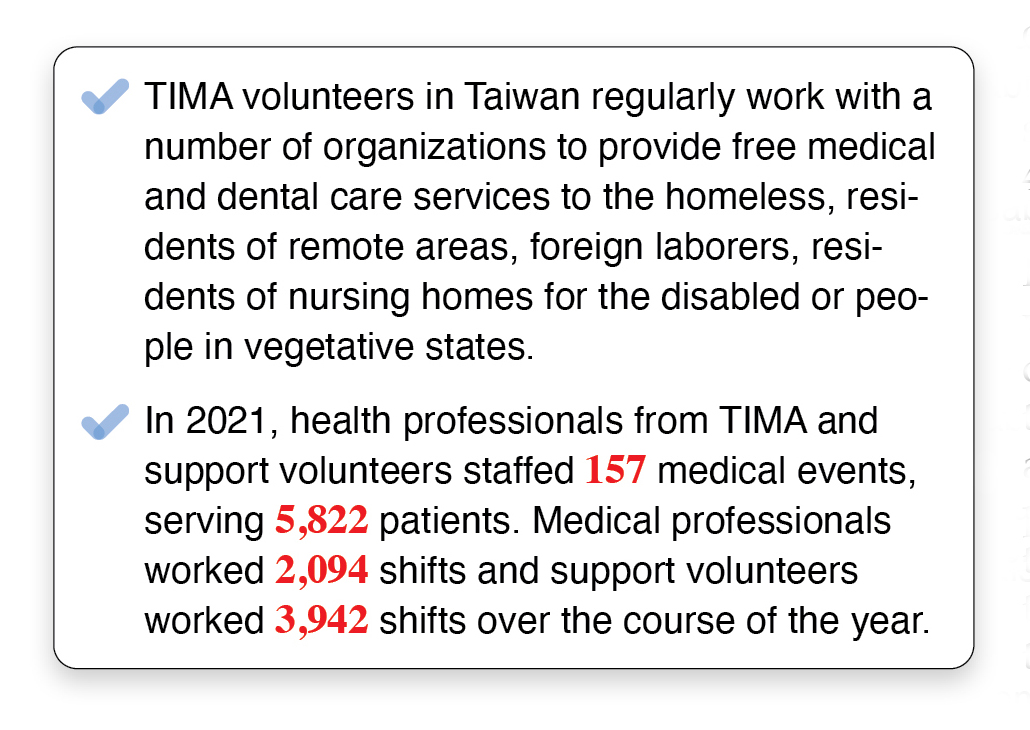