Maintaining Traditions and Protecting the Environment

Maintaining Traditions and Protecting the Environment

Luermen Shengmu Temple in Tainan, southern Taiwan, is dedicated mainly to the worship of the sea goddess Mazu, one of the most revered deities on the island. The temple held a triennial religious festival from April 30 to May 2 this year. During those three days, thousands of devotees of Mazu and performance troupes from more than a hundred temples across Taiwan walked with a statue of the goddess from the temple along nearly 200 kilometers (124 miles) of road in southern Taiwan. This was to call on the power of the goddess to bestow blessings on the local people and regions.

A common sight along the route of the procession were tables bearing offerings put out by households. One could also see devout worshippers on their knees holding incense sticks. The biggest difference between this year's event and those of previous years was that every participating devotee wore a face mask, a concession to the COVID-19 pandemic. This year, in the midst of the pandemic, people needed even more the solace they found in the compassionate image of Mazu.

The triennial event attracts massive crowds, who in turn produce a lot of garbage. Tzu Chi volunteers are a constant presence at the festival to help reduce the impact on the environment. Besides salvaging recyclable trash, volunteers provide reusable tableware for participants who eat at the temple's dining hall and help wash the bowls and plates after they are used to decrease single-use items. This is but one more example of volunteers seeing a need to protect the environment and doing their best to help. 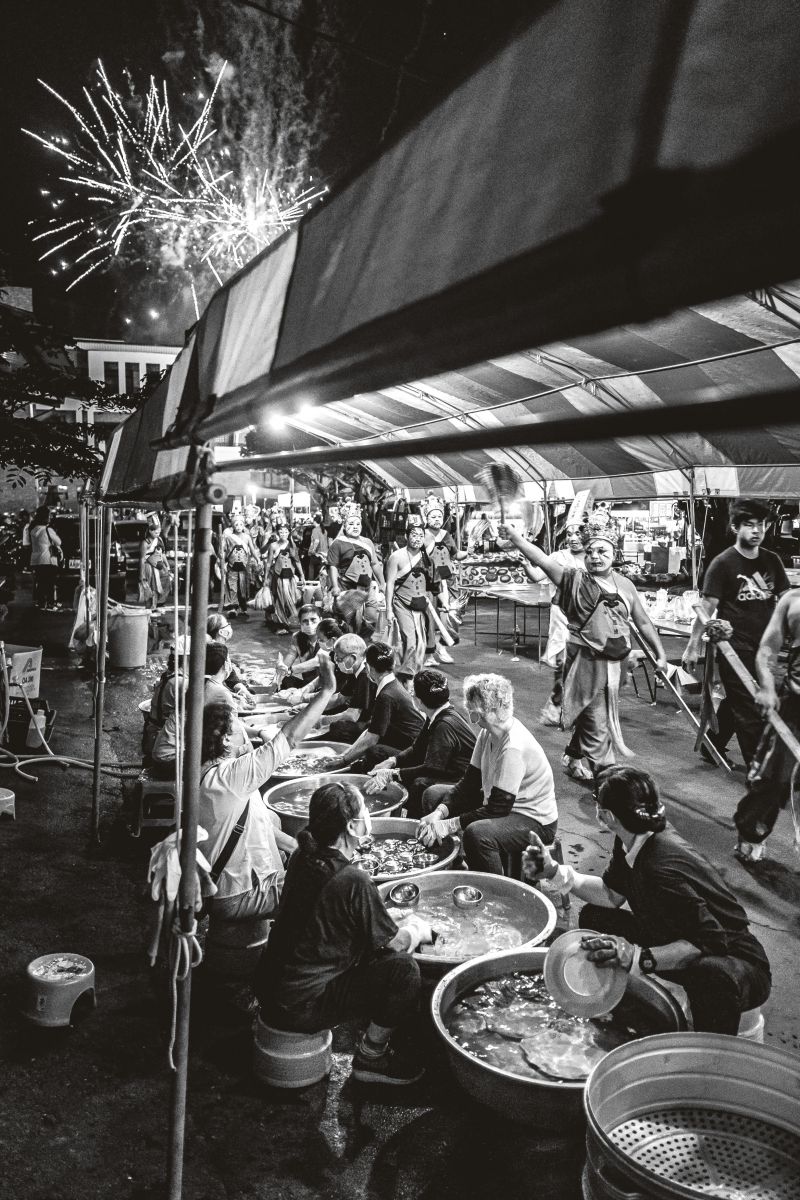 Faces beaming with the joy of giving

It is a tradition for the temple to provide vegetarian meals at their dining hall for worshippers and members of the performance troupes during the three-day festival. This saves them the trouble of having to find their own food to eat. Disposable tableware used to be the mainstay at such meals—the temple did not have enough utensils or dishes for the large crowds, nor did they have enough manpower to wash the plates and bowls afterwards.

This practice might have saved time and effort, but the convenience came at a cost to the environment. In 2012, Tzu Chi volunteers noticed how much garbage was being produced by using disposable items, so they proposed to the temple board to let them provide reusable tableware for the temple to use during the event. The volunteers also promised to mobilize enough people to wash up everything afterwards. The board heartedly agreed, and volunteers have since been providing materials and extra hands for the temple meals. This thoughtful service has won wholehearted support from the temple as well as from many volunteers.

When I attended the event this year to report on the work Tzu Chi volunteers were providing during the festival, I noticed that more volunteers were washing the dishes this year than three years ago. They helped not only during the day but late into the night. It must have been tiring washing so many bowls and plates at a time, but they didn't mind the hard work at all. They knew their labor was helping prevent more harm from being done to the environment.

After the event, as I was reviewing the photos I had taken during the festival, I was moved to see every volunteer's face beaming with the joy of giving. They showed no sign of tiredness at all. I couldn't help but admire their laudable spirit of service and dedication. 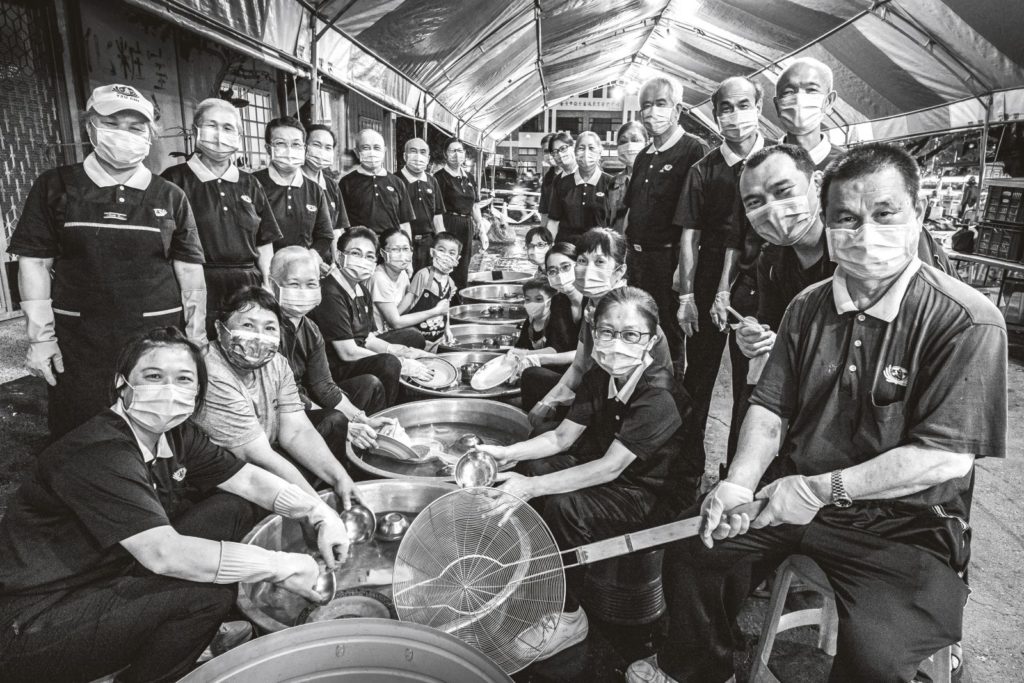 Little kids in the ranks

I remember an especially endearing photo I took three years ago at the temple. It showed a one-and-a-half-year-old toddler quietly playing in a grocery cart behind a group of volunteers fully engrossed in doing the dishes. He was entertaining himself, making no ruckus whatsoever, as if he knew the adults were busy. When I went to the festival this year, I found to my delight that the toddler was now old enough to help the adults wash the dishes. His older brother was there helping out too. The two youngsters are the grandsons of volunteer Zhou Shu-ru (周淑茹). The older one, Huang Pin-sheng (黃品升), was six, and the younger one, Huang Pin-cheng (黃品澄), was four and a half. They knew their grandmother was volunteering at the temple during the festival, so each day when they woke in the morning and from their afternoon nap they asked their mom to take them to the temple to help out.

The little boys fit in very well, each wearing an apron and a face mask, as they sat alongside the adults rinsing the bowls and plates. They did an impressive job, keeping pace with the adults. The younger one was so absorbed in his task that he didn't even notice it when his mask had slipped down his nose.

Seeing the two little "bodhisattvas" was like seeing two seeds of goodness sprouting. The volunteers on-site praised the boys, saying: "Such good kids!" The enthusiastic work from the boys inspired the volunteers too, who in turn worked harder washing the dishes. They said to each other: "These kids will make us look bad if they are working harder than we are! We mustn't lose it to the kids." 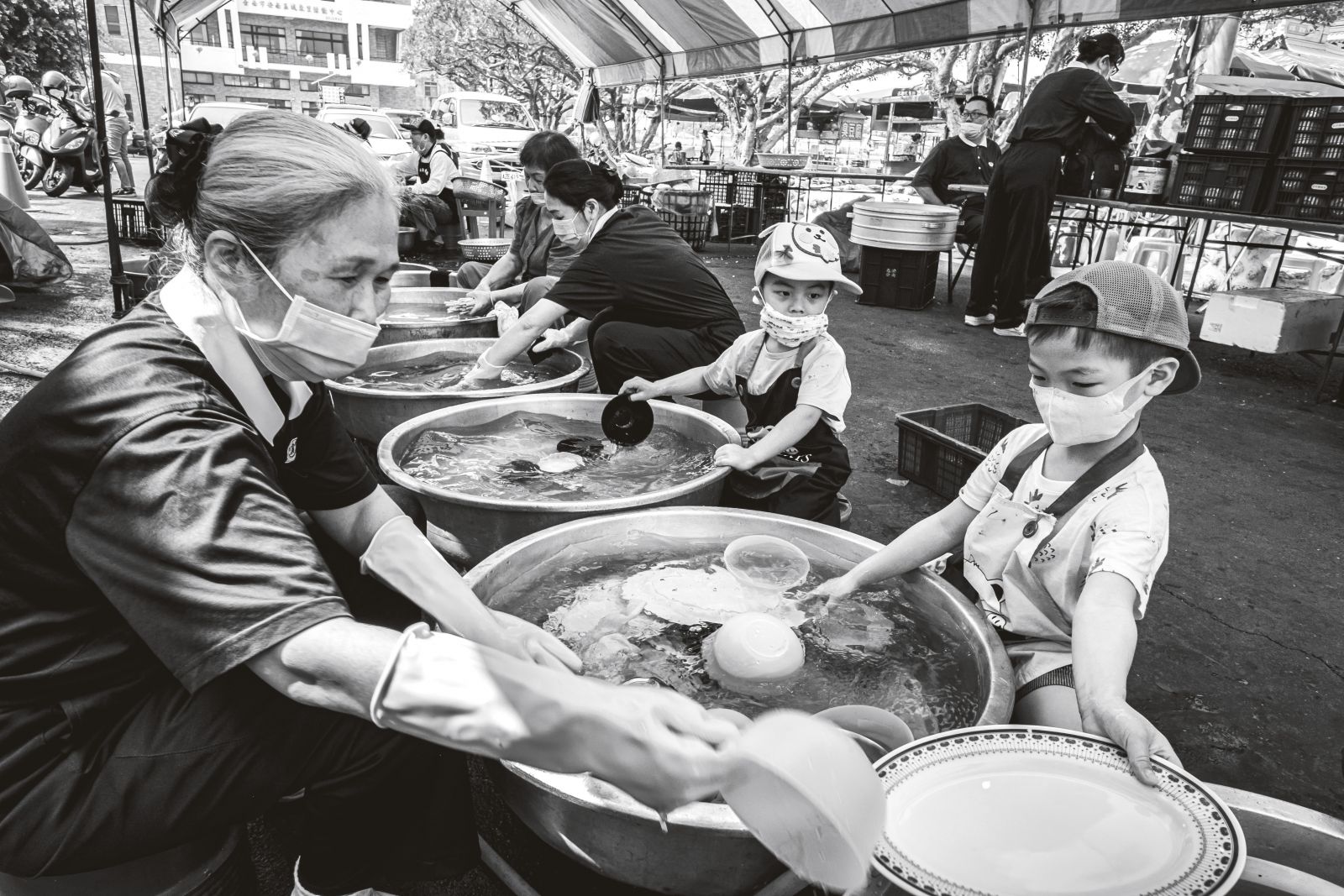 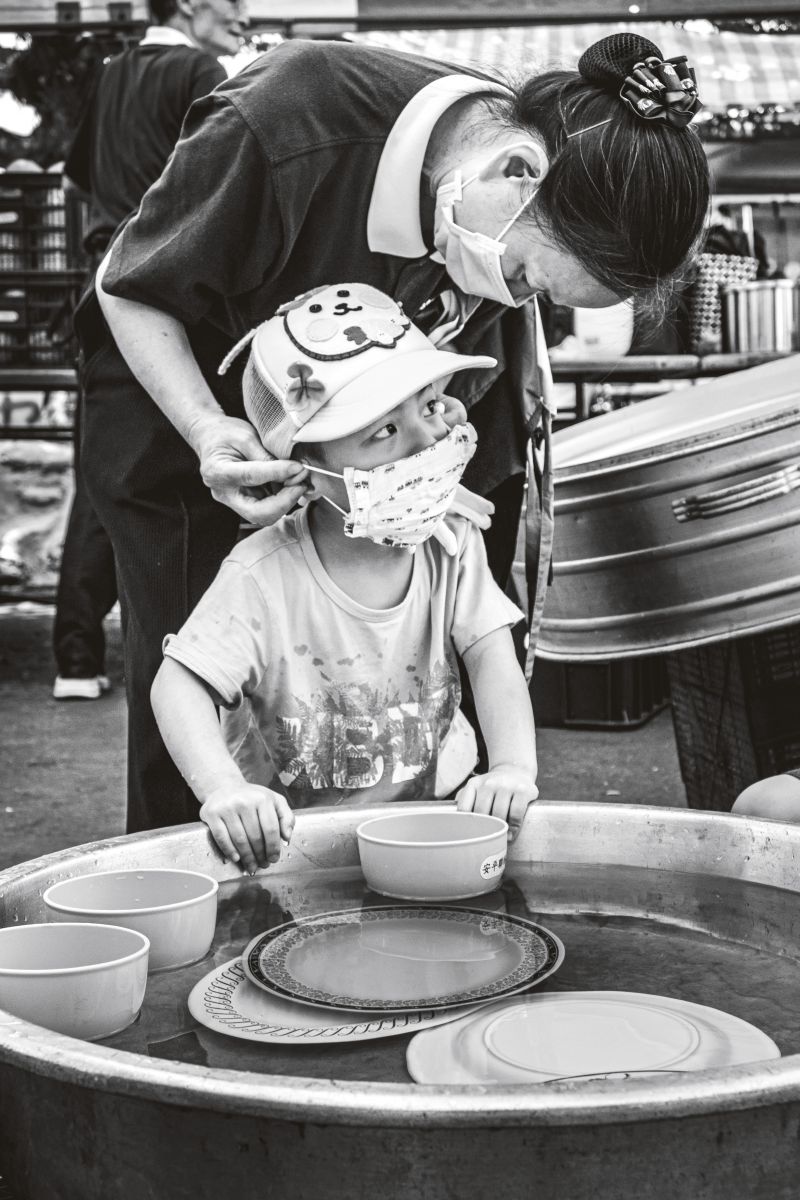 Everyone can play a part

Aside from free meals, sweet mung bean soup—a popular dessert in Taiwan—was also offered on-site. Due to the pandemic, paper cups were used to serve the dessert this year. Tzu Chi volunteers helped dish out the soup and hand it to each recipient, gently saying, "Here you go, and thank you. Next time, please consider bringing your own container for the soup [to help reduce the use of single-use items]." Off to one side, some volunteers were rinsing used paper cups before bagging them for recycling. This was to prevent the residue in the cups from going sour and emitting bad smells. Seeing what the volunteers were doing, some devotees also rinsed their own cups before disposing of them.

With their own actions, the volunteers hoped to inspire the public to give some thought before they threw away their garbage. If a piece of garbage can be recycled, have it properly recycled. And, out of consideration for the volunteers who will handle the recyclables later, please clean and rinse a recyclable item before disposing of it. 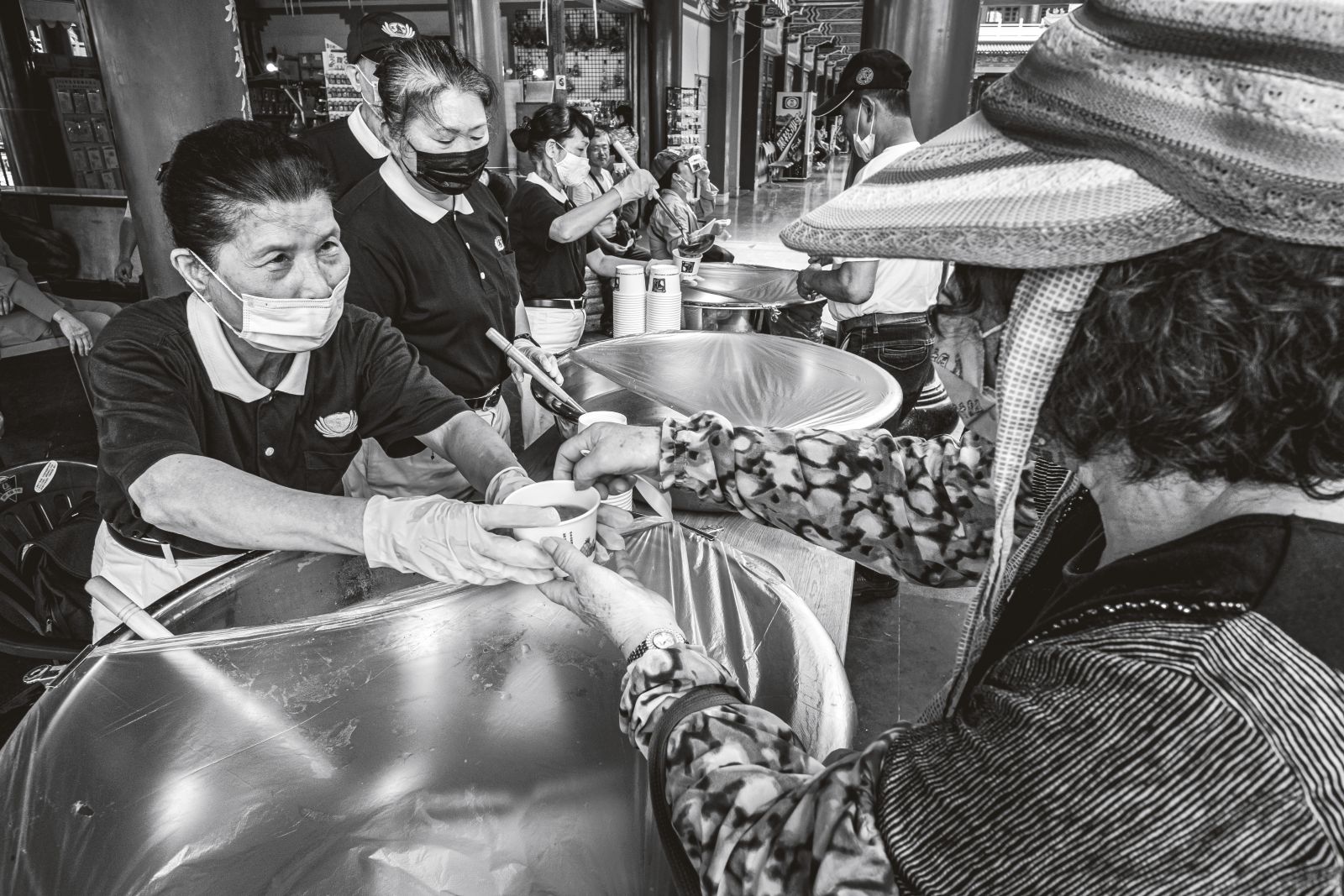 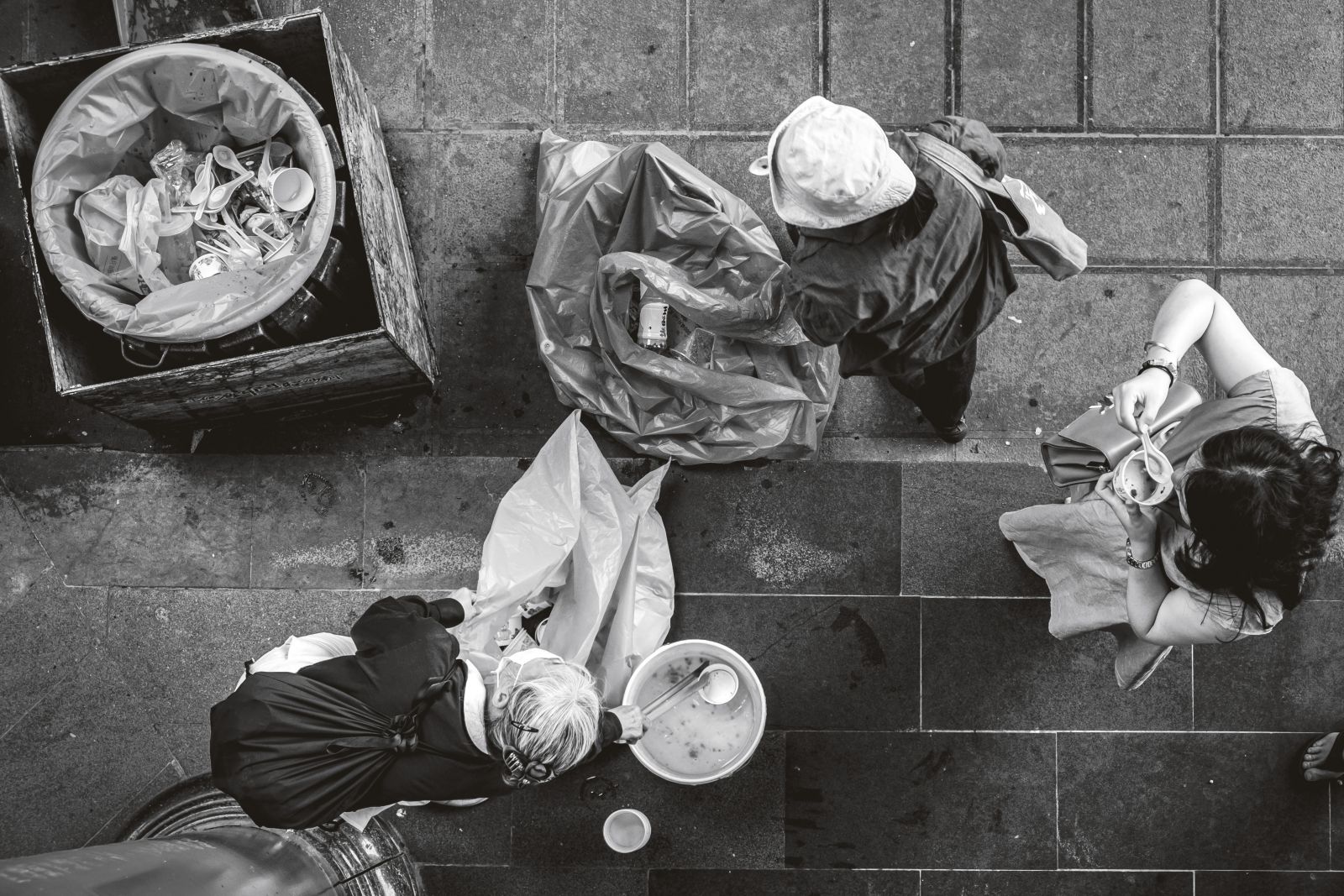 The religious event this year attracted nearly 10,000 attendees. Everyone's attention was on the procession of believers following the deity Mazu and the colorfully costumed performance troupes. Everyone was caught up in the festive mood. However, every time such an event comes to an end and the crowds have left, the ground is invariably littered with spent firecrackers and garbage. This triennial festival was no exception.

Tzu Chi volunteers remain behind when others leave, continuing to work for the environment as they clean up. They can be seen sorting through trash cans standing at various corners of the temple or through piles of bagged garbage to salvage recyclables. They pick out piece after piece of trash that can be recycled, not wanting anything that can be reused to end up in an incinerator or a landfill. The volunteers collected nearly three tons of recycling during and after the event.

The festival demonstrates the verve and vivacity of Taiwan's folk beliefs. People paying respect to and praying for the blessings of deities at such events is a vital part of the local traditional culture. But the festivities would be more pleasing to the deities if more attention was paid to environmental protection. Participants could, for example, avoid littering, properly dispose of their garbage, or bring their own water bottles or food containers to reduce the amount of disposable items. Without a doubt, any deity would smile at such eco-friendly action and the cleaner environment that would result. 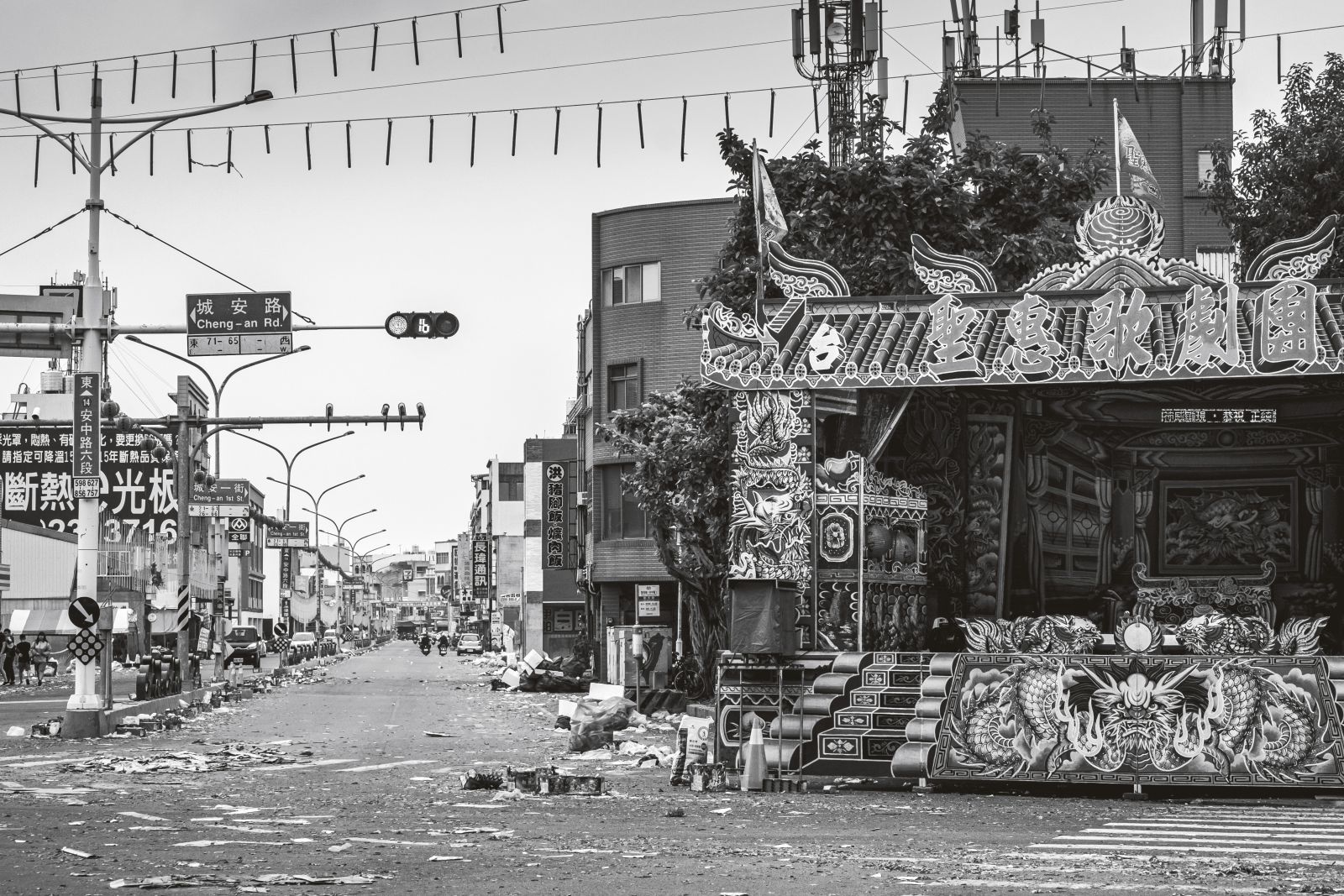 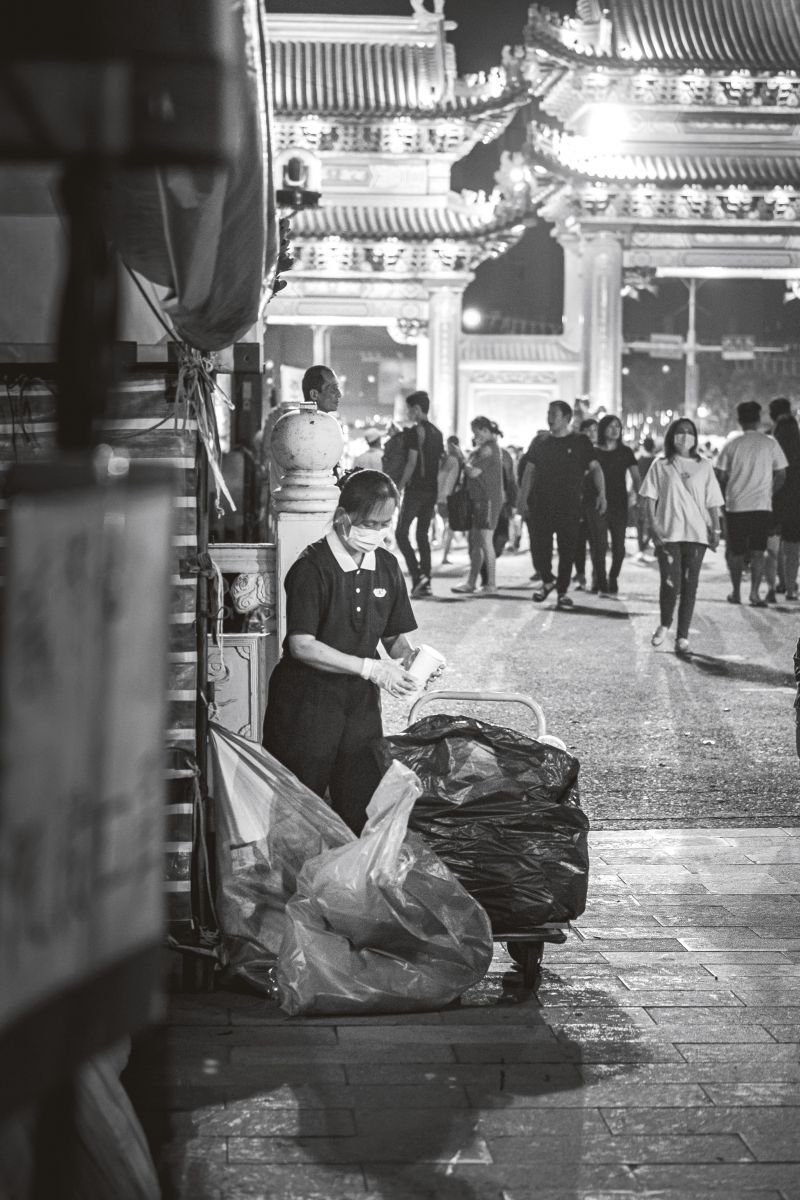