Until My Last Breath

Until My Last Breath

"I'm determined to protect the environment," says 86-year-old Wang Jinhua (王金華) with unwavering conviction. Living in Harbin, the capital of China's northernmost province of Heilongjiang, Wang may be short and petite, but she has tremendous perseverance and willpower, especially since she has found her calling in life. 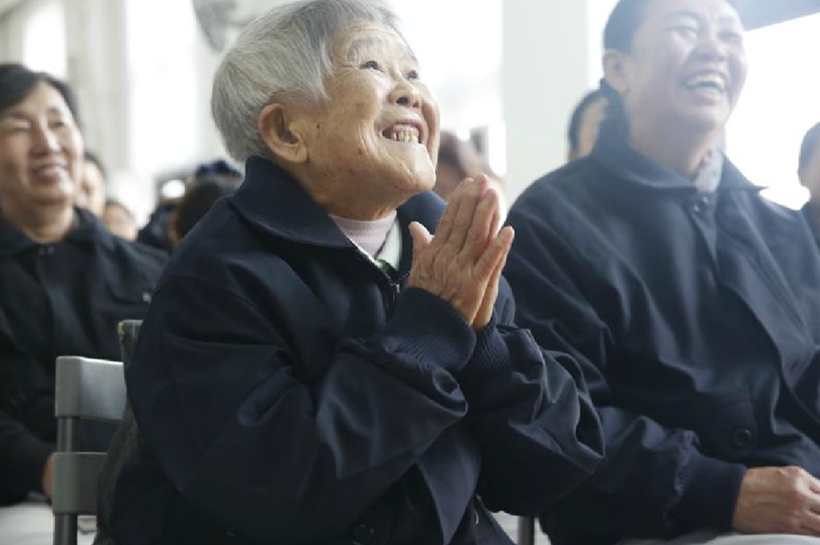 In a land of long and bitter winters with temperatures averaging -15 to -30 °C, Wang puts on warm clothing on a freezing day and leaves her house to pick up recyclables on the streets. She has been doing this for years every single day—snow, rain, or shine. 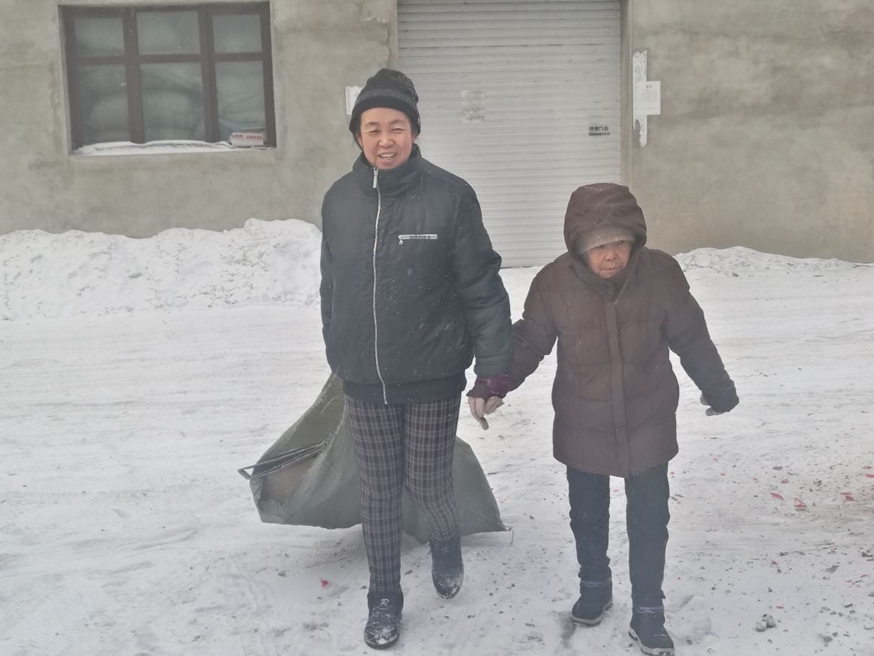 In the freezing winter, Wang and her daughter-in-law pick up recyclacles in their community. (Photo by Liu Fengwei)

"It's snowing outside. Why don't you just stay home?" asks her son, who tries to persuade her to stay in as he shovels thick snow from the ground. Ignoring her son's advice, Wang still goes out as she is determined to pick up recyclables. Her daughter-in-law follows her immediately and holds her hand. Together, they head out into the freezing cold, in search of recyclables littered on the streets. 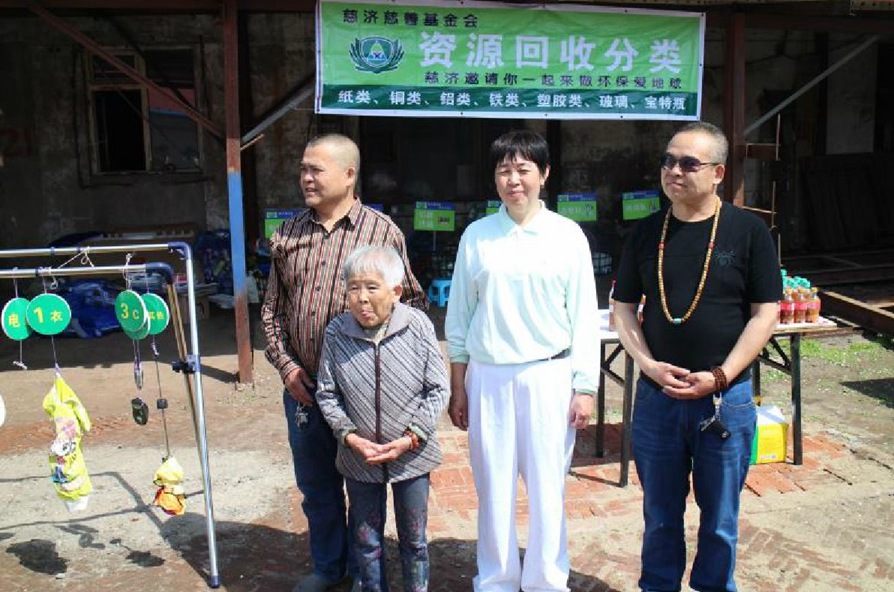 Tzu Chi's northernmost recycling station in Asia was formerly a chicken farm owned by Wang's eldest son (standing behind her), who donated the space for recycling work. (Photo by Liu Fengwei)

As their bag for the recyclables becomes bulkier, Wang shows a plastic bottle in her hand that she just picked up. "These are all treasures!" she exclaims. "How can there be human beings without the Earth? Only when the Earth is safe and well can people be safe and well." Wang spoke of her firm conviction in protecting the environment. A few years ago when she was 83, she happened to watch Da Ai TV and was immediately drawn to Tzu Chi's action to care for the environment. "When I learned about recycling work, it was as if I have found my way back home." Listening to Dharma Master Cheng Yen's words (證嚴上人) on TV, she was deeply taken with Tzu Chi's missions and goals to purify minds, foster harmony in society, and create a world free of disasters. 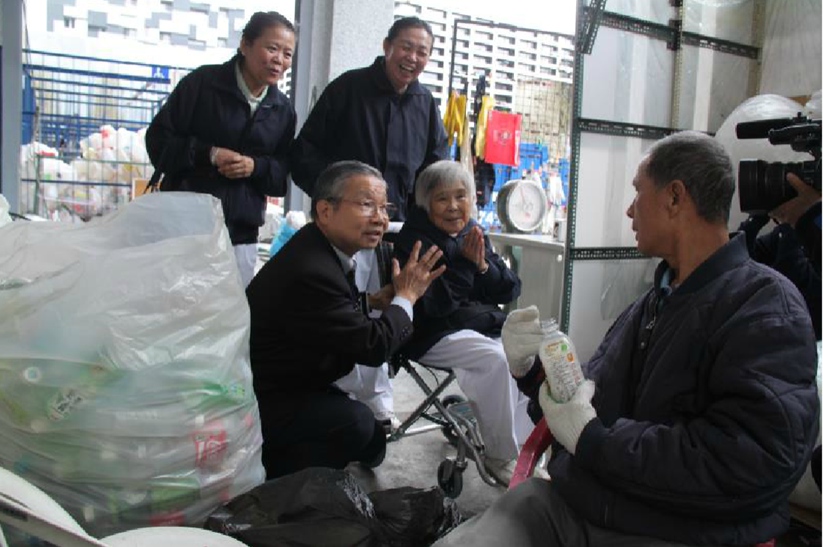 Wang interacts with volunteers in Taiwan during her visit to a recycling station in Taipei City. (Photo by Liao Jia-nan)

In 2016, Wang convinced her son to donate a part of his house to gather and sort recyclables. The space became Tzu Chi's northernmost recycling station in Asia, and much to Wang's contentment, her son and daughter-in-law also help her do recycling work throughout the year. She is really happy to have the support and participation of her family. "I think it's very meaningful." 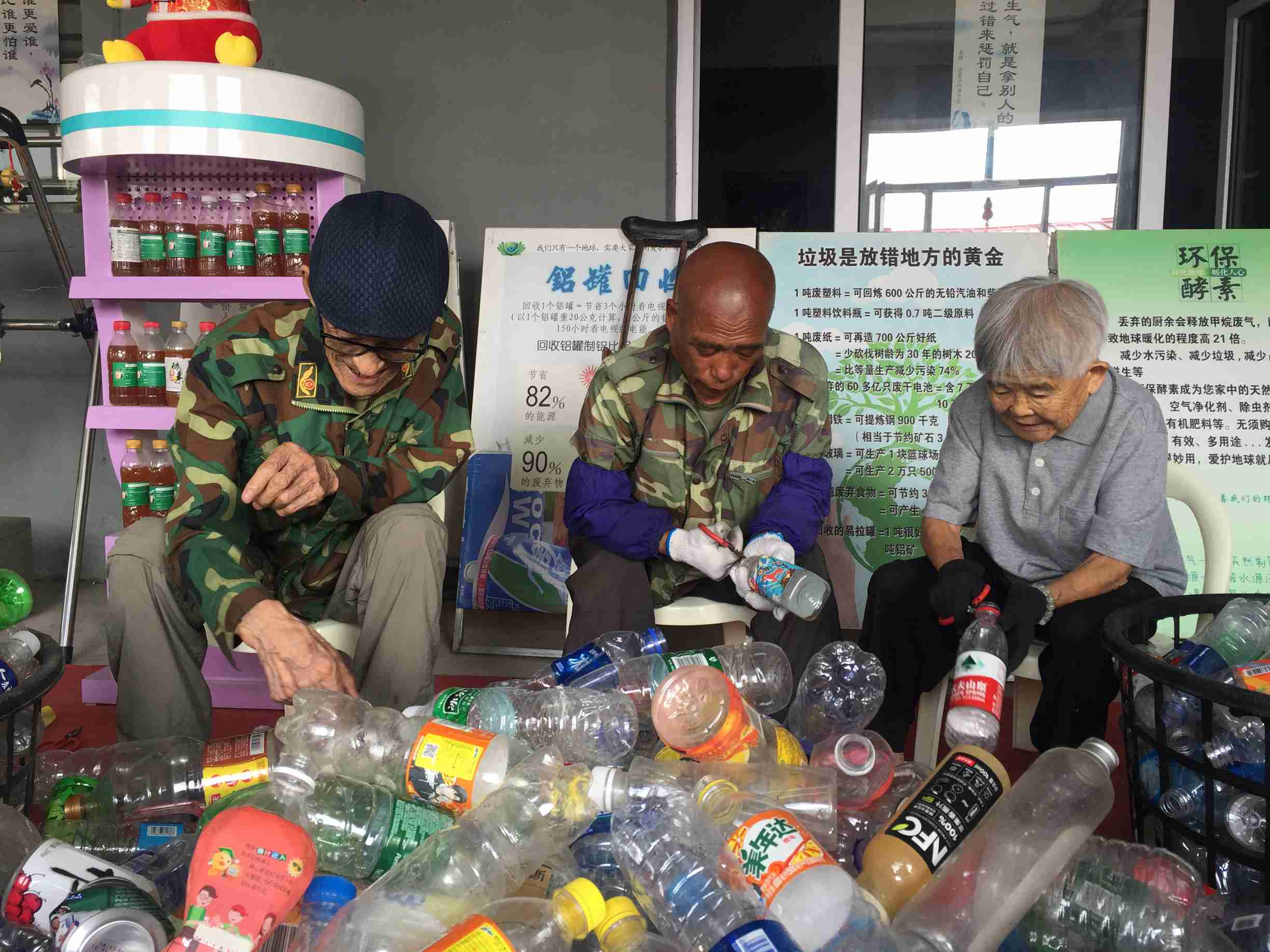 Wang has been promoting recycling and has invited Tzu Chi's aid recipients to sort recyclables at the station. (Photo by Li Zheng)

To learn more about recycling work, Wang decided to visit Taiwan for the first time in early 2017. At a visit to a recycling station in Taipei, she saw how well coordinated all the recycling volunteers were, each with their own responsibilities and tasks such as removing caps and rings from recycled PET bottles or recycling plastic bags. Wang was also quite impressed with a machine that compressed PET bottles as well as the various ways to store recyclables. She also got to wear DA.AI Technology's hat, scarf, and gloves—all made from recycled PET bottles—given to her by other volunteers.

Resolved to do something for the environment, Wang is full of joy promoting recycling in her community and devoting herself to Tzu Chi's work. "I'll do recycling work until my last breath."