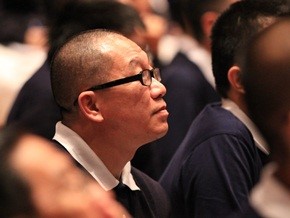 Well aware that time and tide wait for no one, Wu Rong-yao seizes time to do volunteer work in the community. (Photo by Chen Guan-xian)

However, as he was often on the road, he missed many episodes of the series. So, he eventually bought the complete DVD collection. This drama series was what first introduced him to Tzu Chi.

Wu was deeply touched by the protagonist of the drama series, Lin Zhu. "I must be more like her. She says that we mustn't put off doing good and being filial to our parents." He also added, "Lin Zhu not only did recycling very diligently but also sold pickled foods and recycled clothing to fundraise for charity. Inspired by her, with my insurance money and some of my savings, I donated one million NT dollars to Tzu Chi in my mother's name."

When Venerable Yin Shun passed away in June of 2005, Wu happened to be in Taiwan on another business trip. Learning about the news on Da Ai TV, he especially took part in a memorial service to pay respects.

That was the first time he'd interacted with Tzu Chi members. He saw how the volunteers walked in neat and orderly lines either in silence or with their palms pressed together while chanting the Buddha's name. This dignified and solemn scene was deeply imprinted in his mind.

His wife found great joy in doing volunteer work with Tzu Chi and eventually received certification in 2011. As Wu wasn't fond of the concept of being restrained, instead of becoming certified as well, he chose to simply remain to be a Tzu Chi volunteer.

Yet, unable to withstand the urging and encouragement of his children, who have grown up to be well-behaved and considerate people under the influence of Tzu Chi, Wu eventually gave in and agreed to become certified. 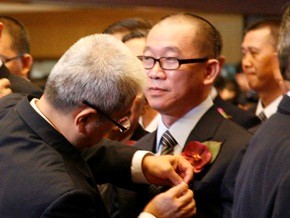 Wu Rong-yao (right) at the certification ceremony in 2012. (Photo by Xu Huei-juan)

In truth, Wu knew very well deep down what a great blessing it was to be in a Tzu Chi family. In comparison to doing Tzu Chi's work alone, it was much better to have family members who supported his work. Because of this, Wu traveled to Taiwan in 2012 to be certified by Dharma Master Cheng Yen. Accompanying him was his mother, his wife and his children.

During the certification ceremony, he felt a surge of mixed feelings as Dharma Master Cheng Yen certified him. From his experience as a community team leader who often took part in chanting for the deceased, the concept of impermanence had influenced him a lot. He understood that everyone brings the karma they'd accumulated with them to the world and cannot decide who they will have as family members. Therefore, one can only seize the chance to form good affinities. Thus, to play his part in doing something good for the Earth, he made a vow right then to promote vegetarianism actively with his wife in the community when they got back to Singapore.